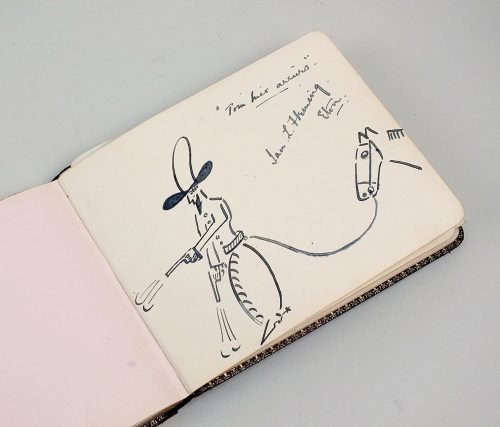 Jeremy Lamond, from Halls made the connection through an autograph book that belonged to Fleming (1908-1964) and which is included in the next country house auction on September 28.

Valued at up to £500, the book contains a pen and ink cartoon doodle of a cowboy in a ten gallon hat with two six shooters and his horse, which and is signed ‘Tom Mix arrives’ Ian L. Fleming, Eton’.

Best known for his James Bond series of spy novels, Fleming was enrolled at Eton College in 1921 and edited a school magazine, The Wyvern. He fell out with his house master E. V. Slater who persuaded Fleming’s mother to remove him from Eton a term early to cram for entry to the Royal Military College at Sandhurst.

He was at Sandhurst for less than a year, leaving in 1927 without gaining a commission and wrote his first Bond novel, ‘Casino Royale’ in 1953 published by Jonathan Cape.

The Thomas Edwin Mix (1880-1940) detailed in the doodle was an American film actor and a star of early Westerns between 1909-‘35, appearing in 291 films, all but nine of which were silent movies. He was Hollywood’s first Western mega star defining the genre for cowboy actors who followed.

“Could it be that Tom Mix provided Fleming with the original inspiration for James Bond?” mused Mr Lamond. “We shall probably never know the answer to that intriguing question.”

From the same vendor is a 19th century Meissen ‘schneeballen’ ecuelle, cover and stand, encrusted with yellow centred mayflower blossoms and applied with yellow canaries in gilt, which was originally from Apley Castle, Telford and is expected to fetch up to £3,000.

The auction even has a Royal flavour. Two boxed pieces of wedding cake from the marriages of Prince Charles and Lady Diana Spencer at St Paul’s Cathedral on July 29, 1981 and Prince Andrew and Sarah Ferguson on July 23,1986, are valued at up to £500 and £150 respectively.

The cake from the wedding of Prince Charles and Lady Diana Spencer is accompanied by range of ceremonial and wedding gifts souvenir programmes and a catalogue, two commemorative coins and related stamps.

Continuing the royal theme, a Regal Century bracket clock by Sewills, specially created in celebration of Queen Elizabeth the Queen Mother’s 100th birthday is valued at up to £900.

Potentially, the star of the auction is a late 17th century William III walnut veneered longcase clock with an eight-day movement by Joseph Windmills, which is valued in excess of £10,000.

Consigned by a North Shropshire vendor, this clock is illustrated in the book ‘Joseph and Thomas Windmills, clock and watchmakers (1671-1737)’ by J. A. Neale and also appeared in an article about Papplewick Hall, Nottinghamshire by Arthur Oswald, Country Life, September 5th 1963.

A mid-18th century Dutch burr walnut eight-day longcase clock by William Redie, Inventeur, Amsterdam carries an estimate of up to £3,000.

Other notable lots include a rare Copeland earthernware platter from the Arctic Expedition 1875, which was discovered by Halls on Anglesey and valued at up to £500.

The furniture section includes a Regency oak sarcophagus wine cooler and an 18th century four drawer oak dresser base at up to £3,000 each.

A 19th century Vienna porcelain cabaret tray, finely painted with a mythological scene of Europa and the Bull and an early 20th century Austrian cold painted bronze model of a carpet seller after Franz Bergman are valued at up to £1,500 each and a late 19th century Meissen porcelain model of a pug could fetch £800.

For more information about the lots, which will be open for viewing on Monday, September 26 from 9.30am-7pm, the following day from 9.30am-4.30pm and on the morning of the auction, which begins at 10am. The catalogue can also be viewed at http://hallsgb.com/auction/country-house-auction-2/