Sir Stanley Matthews tea service sells for £4,800 at Flog It! at Halls

A silver tea service presented to football legend Sir Stanley Matthews, nicknamed ‘The Magician’, to mark his record 44th cap for England, starred for the television cameras at an auction in Shrewsbury today (Wednesday) as it sold for £4,800. 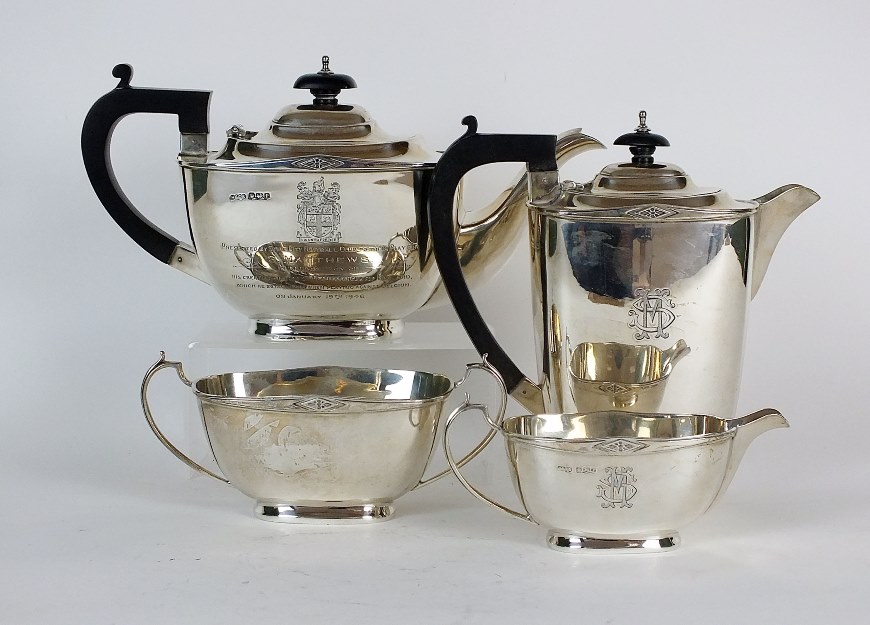 A silver tea service presented to football legend Sir Stanley Matthews, nicknamed ‘The Magician’, to mark his record 44th cap for England, starred for the television cameras at an auction in Shrewsbury today (Wednesday) as it sold for £4,800.

The tea service was one of 30 lots entered in Halls’ interiors auction by popular BBC 1 antiques series Flog It! whose film crew was there to witness a South Coast buyer win a fierce Internet bidding battle, which raced away from the pre-sale estimate of £1,500.

Hallmarked Sheffield 1932, the four piece service carried the monogram ‘SM’ and the Stoke City crest. It was presented to Sir Stanley by his beloved club Stoke City following his 44th appearance for England against Belgium on January 19, 1946.

The tea service was one of the items discovered at a Flog It! valuation day at Sandon Hall by valuers David Fletcher, Christina Trevanion and Charles Hanson.

He played his final competitive game in 1985, at the age of 70 and played at the top level until he was 50. The oldest player ever to play in England’s top football division and to represent the country, Matthews was inducted to the English Football Hall of Fame in 2002.

Following an unsuccessful spell as general manager of Port Vale between 1965-‘68, he travelled the world coaching enthusiastic amateurs.

Halls’ fine art director Jeremy Lamond said: “We were delighted with the price achieved for the tea service which was a very fitting tribute to Sir Stanley, a football legend. Any item associated with him attracts a huge amount of interest from football fans and collectors alike and the tea service had the added bonus of being connected to his record appearance for England.”

“The Flog It! team brought some very good quality lots to the auction which we were delighted to sell on behalf of private clients and look forward to hosting them again in the future. Many of the lots sold well above estimate, which was excellent news for the vendors.”

Other Flog It! lots to sell well included 10 gold sovereigns at £2,300, a gent’s chronograph wristwatch and Heuer ‘Monte Carlo dashboard stopwatch at £1,250, a collection of rock and pop autographs at £700, a Basset-Lowke ‘o’ gauge train at £400 and a collection of Corgi and Dinky toys at £340.