A private collection of scale model O-gauge model steam locomotives has been consigned for sale at Halls Fine Art on the 5th of May.

There are many to choose from, but most are all O-gauge and very well made and painted, with metal bodies, chassis and buffers. The Great Western Railway locomotive ‘Dartmouth Castle’ (4088), illustrated, exemplifies this perfectly with its line painted green livery (estimate £200-400). This train actually existed, as did ‘Hook Norton Manor’ (7823) and ‘Compton Manor’ (7807). For the purist it is important that they are models of steam locomotives from the heyday of steam and have the correct numbers, livery and design. It is clear from the many receipts and correspondence with RPM that attention to detail was vital to both the owner of this collection and the model engineer from RPM itself. Much care and even more time was lavished on these engines. Clearly, passion is the word that encapsulates this pastime. 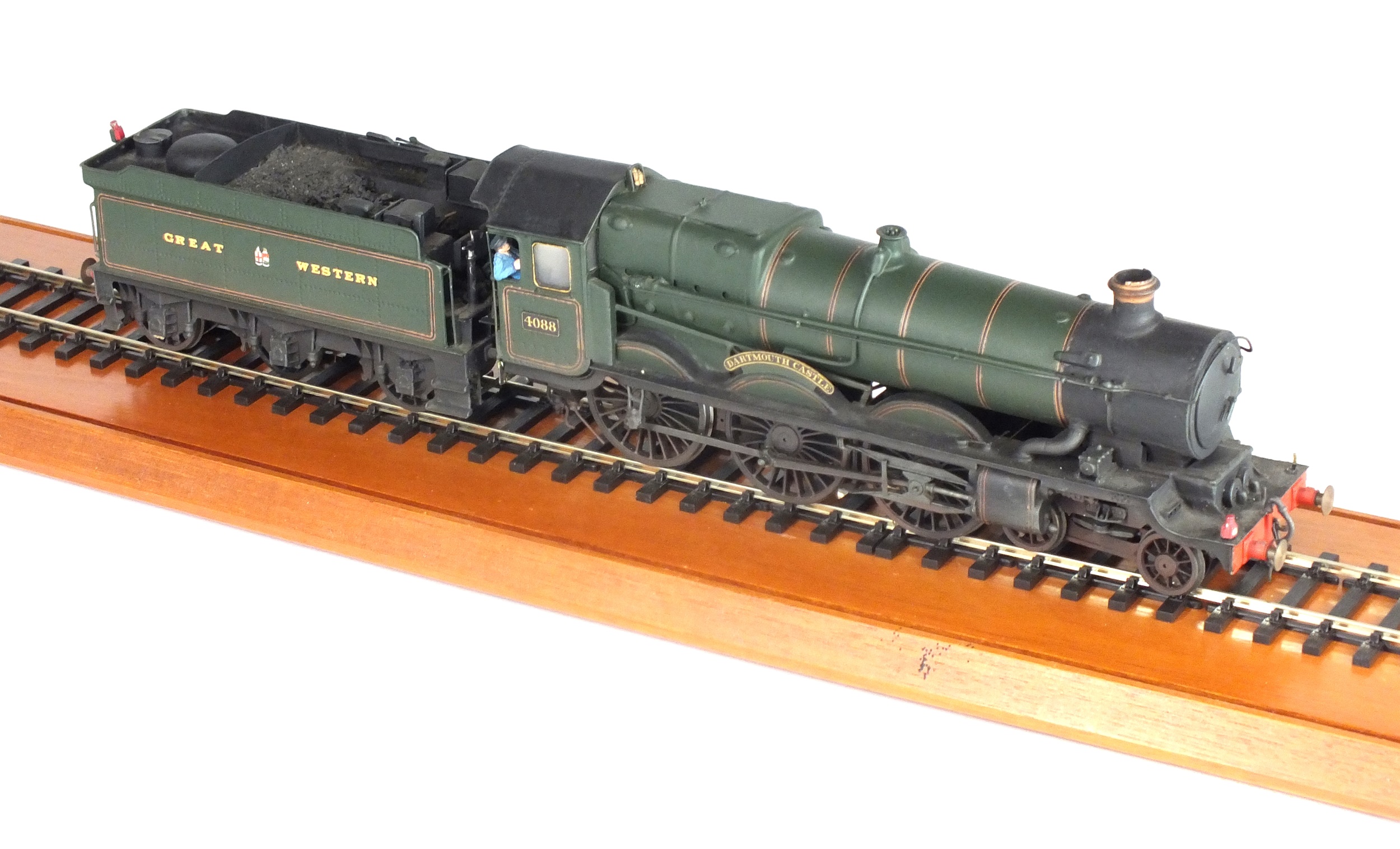 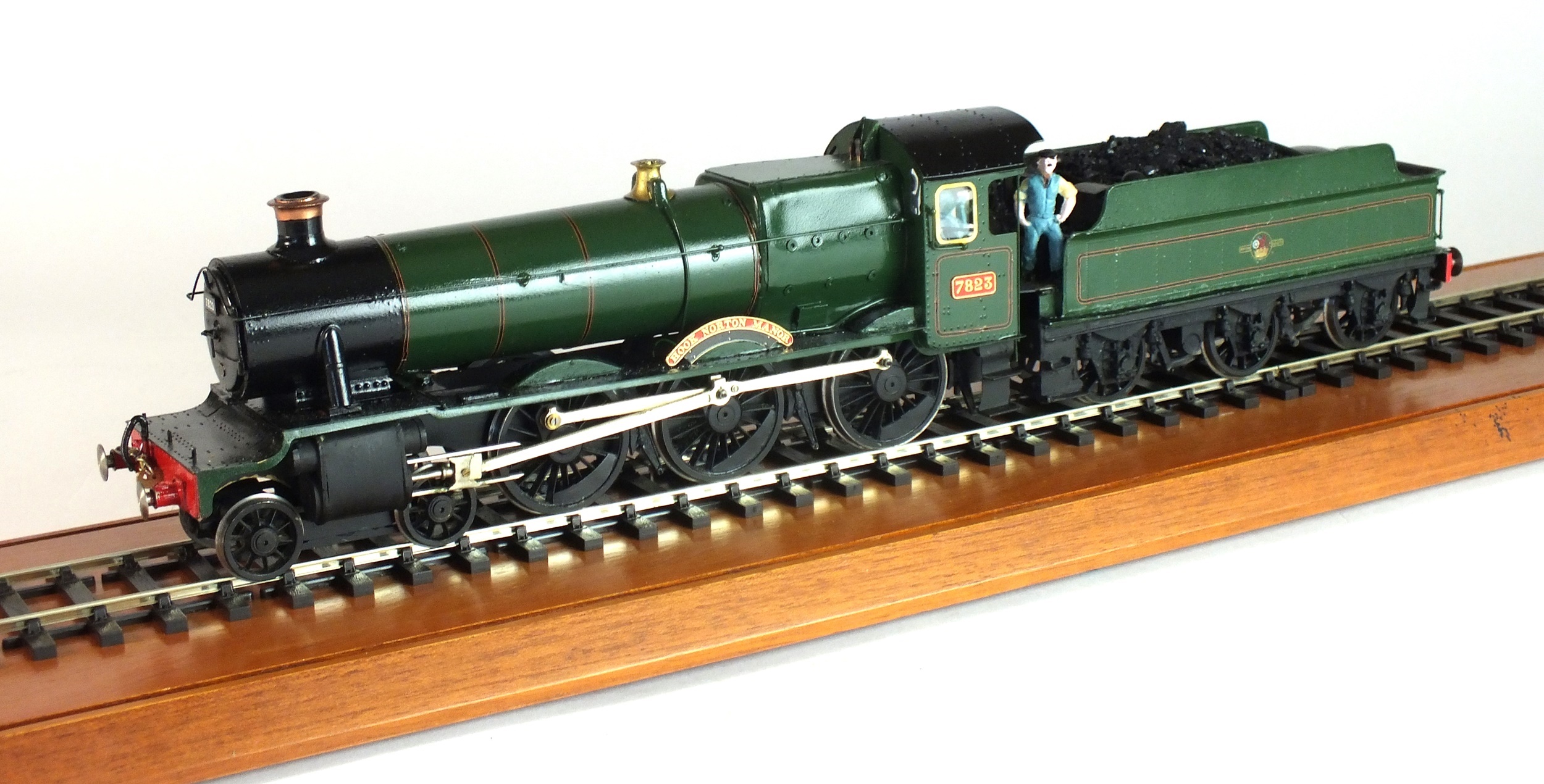 Lot 122:
A good O-gauge scratch-built model of the steam locomotive GWR 'Hook Norton Manor',
'7823', 4-6-0, in GWR lined green livery,
with tender with a British Railways logo of a lion rampant in a crown,
in a mirrored back, glazed wood-effect mdf display case, locomotive built and painted to a good standard,
minor superficial damage to paint finish, not tested to see if in working condition, locomotive 27cm long, case 67.5cm long (3)
With an invoice from RPM, dated 140902 for £550.
Estimate: £200 - £300 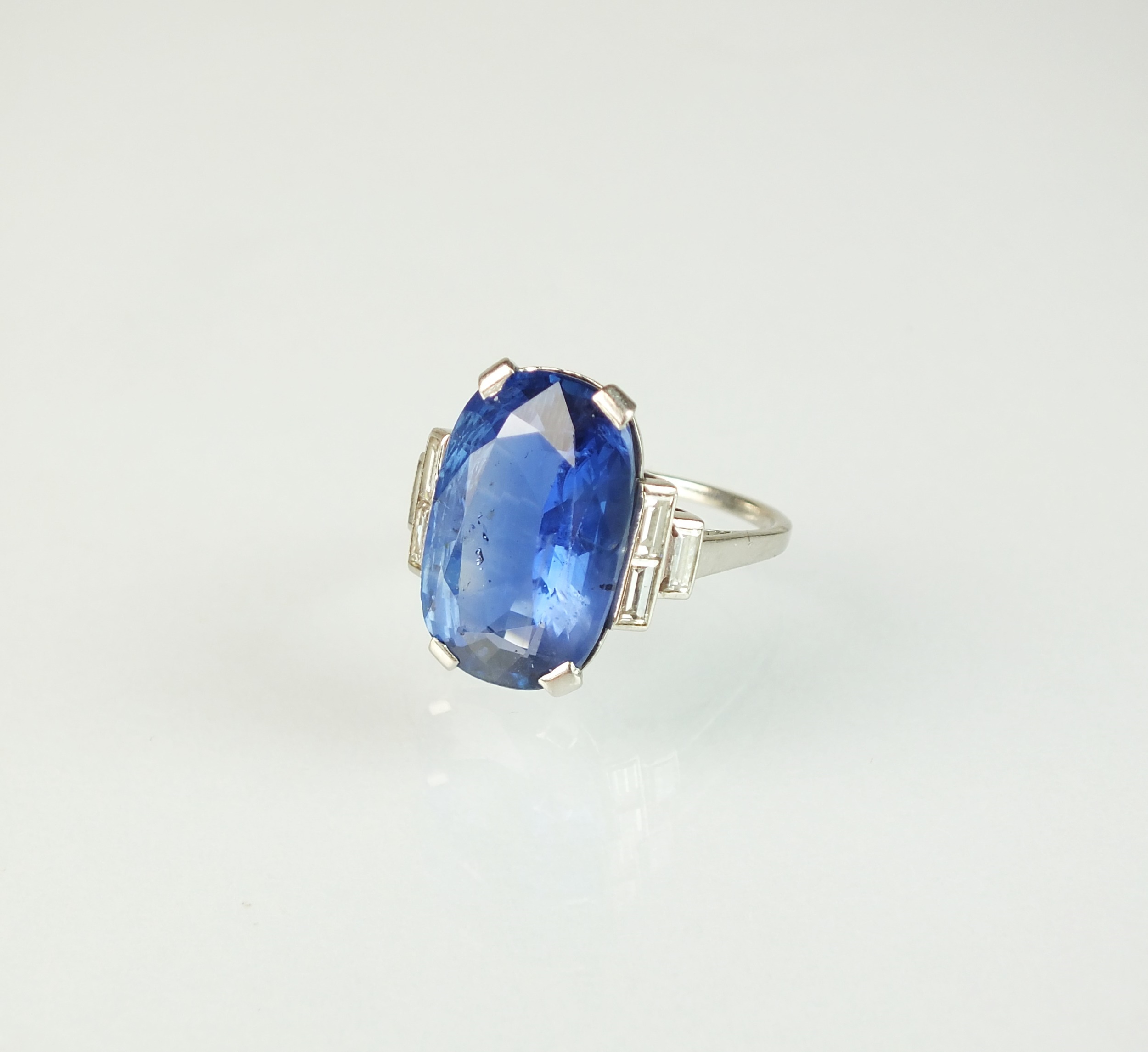 The other part of the collection includes 5 good reproduction totem signs (railway station signs), by Trackside. These include Pant, Oswestry, Ellesmere, Llanymynech and Gobowen, which will end up being displayed, like paintings, on the walls of trendsetters or collectors driven by nostalgia for the age of steam and all that is associated with this bygone era. Indeed, the owner had this collection hanging in his own sitting room.

For the out and out steam locomotive fan the star of the ‘railwayana’ show is a good replica, metal and brass Nunney Castle nameplate, by Severn Lamb. This will be sold with a good replica cast brass cab-side number plate and smokebox plate for the same locomotive (5029). All were displayed in pride of place in the sitting room of the vendor’s home. No mean feat considering the weighty nameplate is 174cm long.

Lot 112:
A good replica metal locomotive nameplate for Nunney Castle,
of double arched form, with brass lettering on a black ground,
above a vacant green field with a red line border, mounted on a painted mdf plaque,
stamped on the back 'Severn Lamb' and '10G(?) 1974', rim at the top broken in three places, paint chips,174cm wide; with a replica cast brass cab-side number plate '5029', the brass numbers on a black ground with a red border and green rim, 63cm x 30cm,
and a good replica cast metal smokebox plate, '5029', with painted white numbers on a black ground, 50cm wide x 15.5cm,
both of the latter on painted mdf plaques;
with a painting by Bernard Jones (active circa 1996), depicting the Castle Nunney locomotive in a station, signed and dated '95' lower left, oil on canvas, 51cm x 61cm (4)
Estimate: £800 - £1,200

The future owner will certainly have to have strong walls. Interestingly, the original for this Oswestry locomotive sold for £17,860 (including premium) on the 21st of November 2003. Although well-made, clearly a later copy is not going to have the allure of an original, but for those who are devotees of this field of collecting £800-1,200 is much, much more affordable. There is the added enticement of an oil painting of this locomotive in the same lot. Nunney Castle was built in May 1934 and withdrawn from service in December 1963 and was then sold to the Great Western Society.

So, whether a train enthusiast, or a model railway purist there is plenty to satisfy both parties. Aesthetics, authenticity and nostalgia for the former and action, precision engineering and entertainment for the latter. What unifies all though is a shared passion and the great fun that comes from indulging in one’s true hobby, in one of the most romantic of all modes of transport – steam locomotives.

Antiques and Interiors Auction
Wednesday 5th May 10am