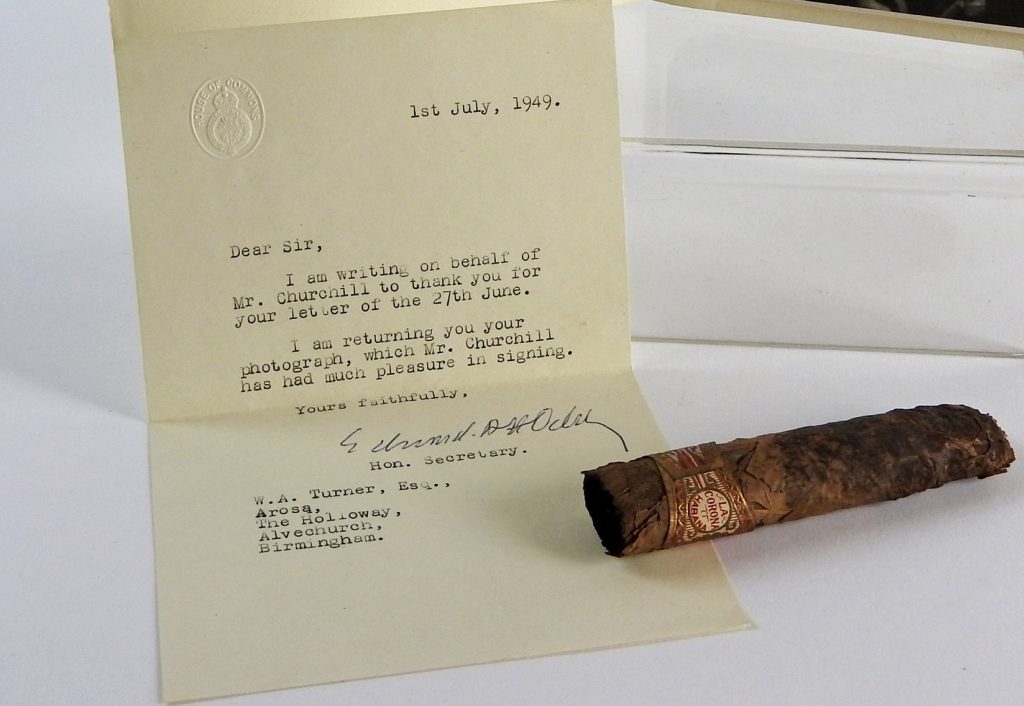 A cigar half smoked by Britain’s wartime leader Sir Winston Churchill lit up an auction in our April fine auction yesterday (Thursday) as it sold for £1,700.

The cigar, with its distinctive red and gold Winston Churchill band, together with associated photographs and a letter from his secretary on House of Commons headed notepaper, wet under the hammer in fine art auctioneers Halls’ two-day country house auction here at our Battlefield salerooms. It sold to a private buyer in North East England.

Churchill, who led Britain to victory in the Second World War, served as Conservative Prime Minister twice from 1940 to ’45 and from 1951 to ’55.

He half smoked the cigar before boarding an aeroplane at Le Bouget Airport, Paris on May 11, 1947 after spending three days in the French capital. A photograph in the lot shows Churchill standing in the doorway of the Avro York MW101 aeroplane smoking the cigar.

“He stubbed out the cigar in an ashtray after boarding the plane and it was taken into protective custody by Corporal William Alan Turner, Air Quartermaster with 24 Squadron Transport Command, who was a member of the cabin crew that flew Churchill and his wife from RAF Northolt to Paris and home again,” said Andrew Beeston, Halls’ senior auctioneer and valuer.

“The cigar remained in late Corporal Turner’s possession and must have been a topic of conversation for many years. Had it not been half smoked by the great man, the value would have been much less and the photograph supported the provenance.”

Another letter from Churchill dated April 4, 1950 on 28, Hyde Park Gate, London, S.W.7. headed note paper, thanking a Miss Schier for her assistance in the general election campaign, sold for £150.

It was an auction for former prime ministers and royalty, as a signed letter from Benjamin Disraeli to Dr William Penny Brookes of Much Wenlock, founder of the Wenlock Olympic Games, which was a forerunner to the modern Olympic Games, sold for £200.

Dr Brookes, who also established the Agricultural Reading Society in 1841 for the better education of farm workers, wrote to authors seeking donations of books to the society and the letter from Disraeli, a prominent figure in the Conservative Party at the time who became prime minister twice, was in reply to one such request.

Royalty was represented by two 19th century visiting books that belonged to the Duchess of Cambridge. The first volume listed the Duchess’ visitors whilst living in Florence, Naples and Rome between 1840-’41. The second volume captured visitors to her home at Cambridge Cottage, Kew from 1855-’73. They sold for £180.