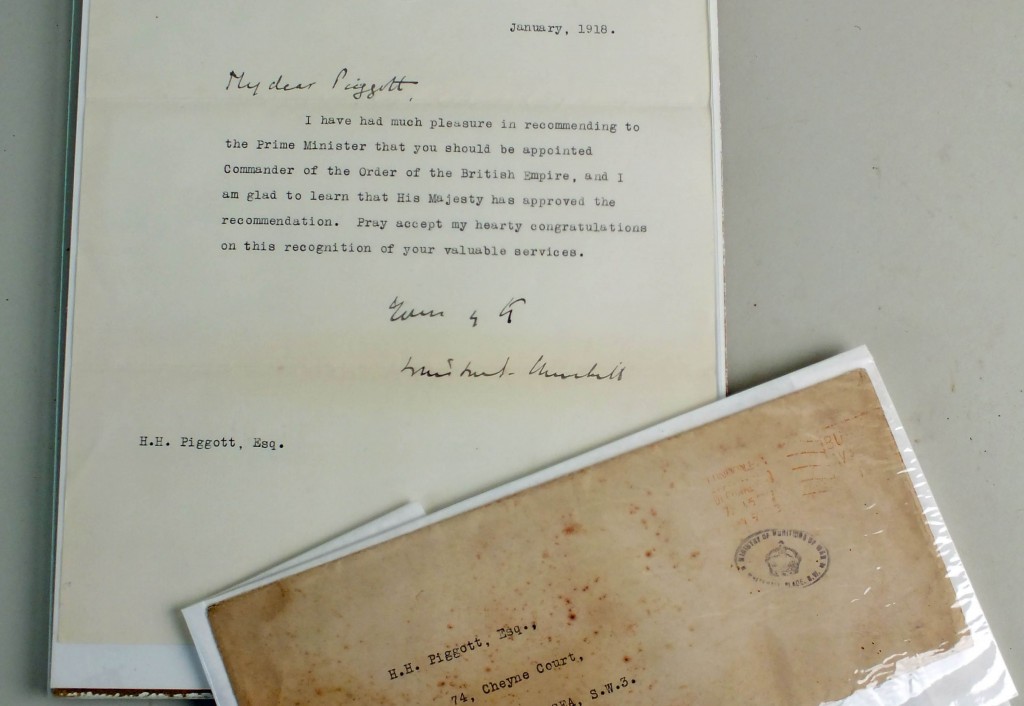 A letter signed by Sir Winston Churchill congratulating a subordinate in the Ministry of Munitions on being recognised with a CBE towards the end of the First World War sold for £800 at Halls Fine Art Militaria auction yesterday (Wednesday).

The letter, dated January, 1918, also informed Henry Piggott, who received both the CBE and CB and was later knighted, that Churchill had recommended him to the Prime Minister for the award whilst serving as Minister of Munitions. At the time Piggott was Assistant Secretary of the Ministry.

As a result of the ‘shells crises’ of 1915, David Lloyd George took over as Minister of Munitions and radically reorganised Britain’s shell supply before being succeeded in July 1917 by Churchill.

The letter went under the hammer at fine art auction house Halls where an Indian Mutiny medal awarded to Captain B. Johnston, of the 4th Battery 14th Brigade Royal Artillery, who was later promoted to Lieutenant Colonel, sold for £700.

The medals on offer, which spanned from 1815 to the Iraq War, also included a Crimean War Medal 1854-’56 and a Knight Legion of Honour medal awarded by France to an assistant surgeon John Gibbons, of the 44th Regiment of Foot, which sold for £520.

A private collection of military uniforms, ranging from the 1920s to the ‘60s, sold in 55 lots for £2,500, with the top price £210 going to a Royal Navy ceremonial officer’s day dress uniform, which was marked G. A. Scott.

Other leading prices were £600 for a 19th century wooden South American block club from Guiana, £400 for a German presentation hunting dagger, £360 for a collection of assorted Army cap badges and £340 for a Second World War Japanese shin-gunto officer’s sword from a Whitchurch vendor.

Highlights of Halls Fine Art Interiors Auction were a 17th century style oak refectory table at £540 and a Coalport porcelain dessert service from between 1820-’40, which made £270.

Halls’ Fine Art director Jeremy Lamond said: “Fresh to the market medals and militaria from private vendors continue to generate the most interest and command the highest prices at auction.”