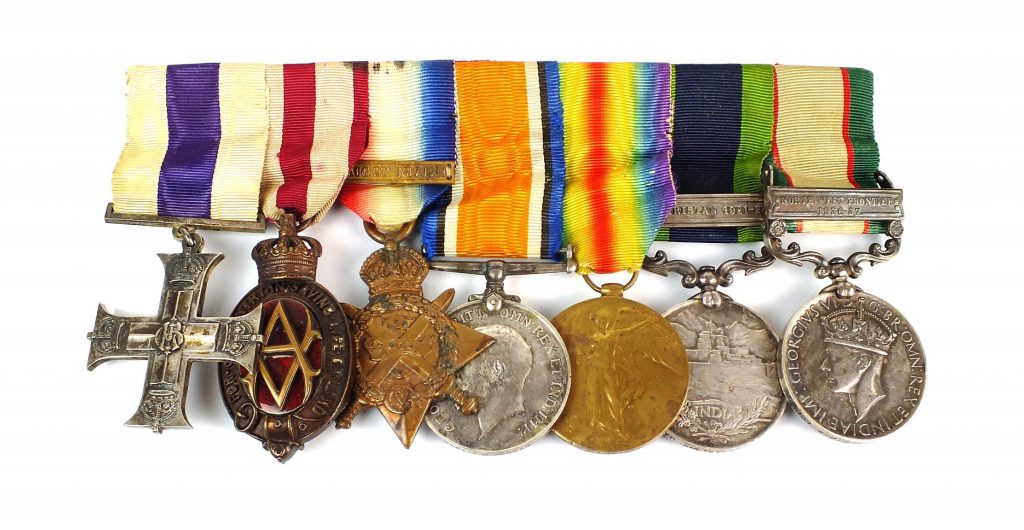 A group of medals awarded to a Welsh First World War hero sold for £10,000 at an auction in Shropshire this morning (Thursday).

The medals, which included a Military Cross and Albert Medal for conspicuous gallantry, were awarded to William Marychurch Morgan from Jeffreyston, near Tenby.

They went under the hammer at auctioneers Halls’ £300,000 two-day auction of fine pictures, silver, jewellery, coins and medals in Shrewsbury and were purchased by a bidder from North Wales.

Morgan, the second son of the Rev William Morgan of Jeffreyston, served as a Private in the Honourable Artillery Company prior to being commissioned Temporary Second Lieutenant to the 15 Royal Welch Fusiliers in April, 1915. He went to France in December of that year and was wounded in the trenches in April, 1916.

He was awarded the Albert Medal Second Class in May, 1916 for bravery following a potentially lethal incident while on a training exercise using grenades in a trench in Locon in the Pas-de-Calais, France, on February 14, 1916.

A man dropped a grenade, which sank in the mud, so that only the smoke from the burning fuse could be seen. Lieutenant Morgan, who was outside the danger zone, sprang forward and groped in the mud for the grenade, which he eventually found, picked up and threw over the parapet just in time, saving several men from death or serious injury.

He was promoted to Temporary Lieutenant and was awarded the Military Cross on October 23, 1916 for conspicuous gallantry in action. He led daring but successful raids on enemy trenches in the Arras sector, taking four prisoners and inflicting many casualties.

His citation reads: “On seven consecutive nights, he carried out valuable reconnaissance under intense fire. Later he led a daring raid himself, accounting for one of the enemy. He has previously done fine work.”

Morgan was presented with both gallantry medals by King George V at Buckingham Palace and later received the 1914 Star, known as the Mons Star, the British War Medal and the Victory Medal for his service during the Great War.

He was promoted to Temporary Captain in June, 1917 and died on October 23, 1944 while serving as a Lieutenant Colonel in the Second World War.

The Albert Medal was instituted in 1866 and named after Queen Victoria’s consort, Prince Albert, who had died in 1861. Until the institution of the George Cross in 1940, it was Britain’s premier decoration for civilian acts of gallantry in saving life at sea and on land. Only 290 medals were awarded before it terminated in 1971.

Derek Ainsworth, Halls’ medals specialist, said it was a privilege to sell such an “exceptional” medal group and revealed that the owner was delighted with the price achieved at auction.

The medals were discovered by valuers from Halls at a recent valuation day in Tenby and the company will be returning to Pembrokeshire for further events later this year.