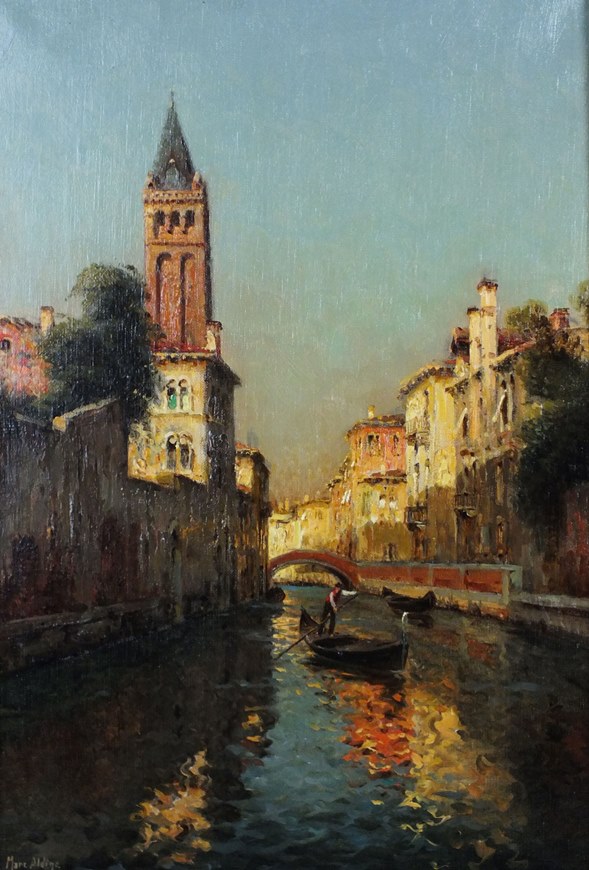 Fine art auctioneers Halls were delighted with the upbeat mood of their packed Battlefield saleroom for the successful paintings, silver and jewellery auction.

The painting by Aldine (1870-1955), the pseudonym for celebrated early 20th century artist Antoine Bouvard, was titled ‘Venetian canal scene with a figure in a gondola, a bridge and sunlit buildings nearby’ and sold for £9,000.

Although he was best known as one of Britain’s most successful playwrights, an actor, director, singer and cabaret performer, Sir Noel Coward was also a talented amateur artist.

His oil painting depicting a ship in choppy waters off West Sussex, ‘Off Shore Shoreham’ was painted in 1950 and sold for £2,800 after fierce bidding.

Another success in the picture section was ‘Boulevard Sous La Neige’, a typical Parisian street scene in watercolour and gouache by Eugene Galien-Laloue (1854-1941), which made £5,700.

Tripling its pre-sale estimate was an 18th century portrait of Isabella Bennet FitzRoy, Countess of Arlington, who was married to the illegitimate son of King Charles II at the age of four. The painting, which sold for £2,300, was in the style of Charles Jervas.

Isabella (1668 to 1723) was the daughter of Royalist commander Henry Bennet, 1st Earl of Arlington and Isabella de Nassau (1633–1718), granddaughter of Maurice of Nassau, Prince of Orange.

She was wed at the age of four to Henry FitzRoy, Earl of Euston and later Duke of Grafton, the nine-year-old illegitimate son of King Charles II. The wedding ceremony was repeated in 1679 and they had one son, Charles FitzRoy, 2nd Duke of Grafton.

After her first husband’s death in 1690 while leading the forces of William of Orange at the storming of Cork, Isabella remarried in 1698 to Sir Thomas Hanmer (1677–1746), 4th Baronet and Speaker of The House of Commons from 1714-’15, who is best known as an early editor of the works of William Shakespeare.

The popularity of contemporary artist Jonathan Armigel Wade came to the fore again. His oil painting ‘Tea break’, depicting two figures taking a break from their labours with a dog by their side and a sunlit coastline beyond on the West Coast of Scotland, attracted keen bidding as selling for £2,700.

A watercolour commissioned by the cousin of the bandleader, who is famously remembered for playing the violin while the RMS Titanic sank after hitting an iceberg, sold for £840 to a telephone bidder.

The painting by Liverpool marine artist Arthur Knowles (circa 1875-circa 1950), which showed the stricken Titanic hitting the iceberg on its maiden voyage on April 15, 1912, was consigned by a Whitchurch area vendor.

It was commissioned by his uncle, a cousin of Wallace Henry Hartley, bandleader and violinist aboard the Titanic. Hartley became famous for leading the eight member band as the ship sank and they all perished.

Survivors reported that Hartley, 33, and his fellow band members started playing music to help keep passengers calm as the crew loaded the lifeboats. Many said that he and the band continued to play until the very end.

Halls’ fine art director Jeremy Lamond said he was delighted with the buoyant market for the quality paintings on offer in the auction, which augured well for the year ahead.

“It was a very lively and well attended auction with excellent prices achieved across all areas,” he added.