Titanic watercolour commissioned by cousin of hero sells for £840. 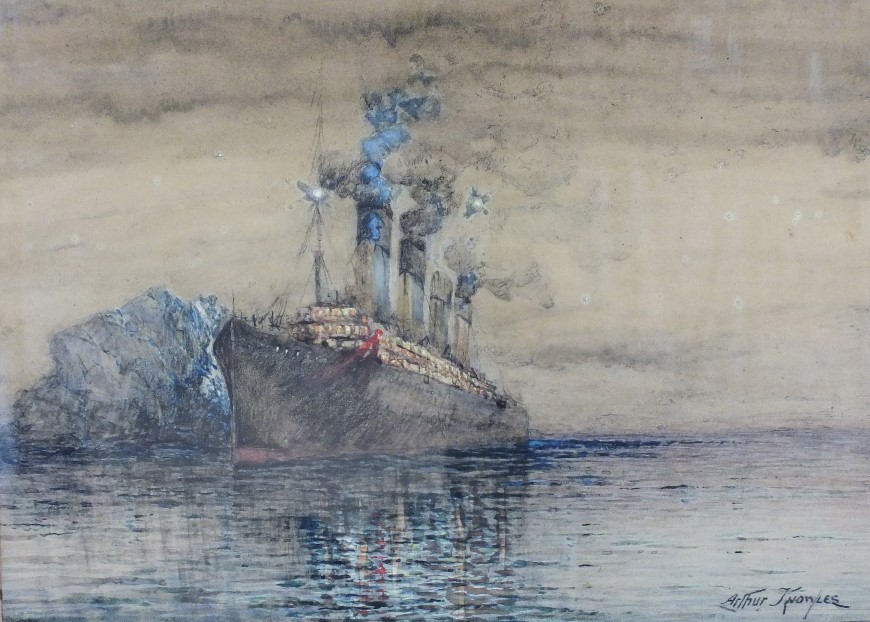 The painting by Liverpool marine artist Arthur Knowles (circa 1875-circa 1950), which showed the stricken Titanic hitting the iceberg on its maiden voyage on April 15, 1912, went under the hammer at fine art auction house Halls last week and sold for a Southern England bidder.

The vendor, who lives in the Whitchurch area, told Allan Darwell, head of Halls’ art department, that the watercolour was commissioned by his uncle, a cousin of Wallace Henry Hartley, bandleader and violinist aboard the Titanic.

Hartley became famous for leading the eight member band as the ship sank and they all perished. Survivors reported that Hartley, 33, and his fellow band members started playing music to help keep passengers calm as the crew loaded the lifeboats. Many said that he and the band continued to play until the very end.

One survivor said he saw Hartley and his band standing on the boat deck, near the entrance to the grand staircase, near the base of the second funnel. As the boat sank, Hartley is claimed to have said: “Gentlemen, I bid you farewell!”

One newspaper reported: “The part played by the orchestra on board the Titanic in her last dreadful moments will rank among the noblest in the annals of heroism at sea.”

Hartley’s body was recovered almost two weeks later and, according to press reports, was “fully dressed with his music case strapped to his body”. The funeral took place in his home town of Colne on May 18, 1912 and was attended by 1,000 mourners, while an estimated 40,000 lined the route of his procession.

He is buried in the Keighley Road cemetery, Colne, where a headstone, containing a carved violin at its base, was erected in his honour.

A memorial to Hartley, topped by his bust, was erected in 1915 outside what was then the town library. The memorial is inscribed: “Wallace Hartley Bandmaster of the RMS Titanic who perished in the foundering of that vessel, April 15th 1912. Erected by voluntary contributions to commemorate the heroism of a native of this town.”

His large Victorian terraced house in West Park Street, Dewsbury also bears a blue plaque to remind passers-by that he lived there. He was a member of the Hartley family famous for jam making.

“This Titanic memorabilia is so sought after because of its rarity and the provenance of this painting added to its value,” said Mr Darwell.