The 2022 Halls Fine Art auction calendar will now include two specialist military sales per year. After the successes of our most recent military sale which hosted a number very successful lots, including a Russian Officer’s sword which sold for £1920 (+ Buyer’s Premium) and a sign removed by a British solider from the boundary of Spandau prison that sold for £520 (+ BP) it is clear this is in area of collecting which continues to only grow in strength.

With this in mind, we are calling for further entries from prospective vendors and can offer appraisal and sales advice on any items in this category free of charge at no obligation. Our next sale is to be held in January 2022 and will be held in a Timed Online format, which benefits from a blend of the traditional auction format together with an easy and transparent means of bidding live at home.

Entries already consigned include a Second World War ‘Caterpillar Club’ badge with log book, awarded to F/Sgt upon his survival ditching into the sea during an operational bombing raid estimated at £600/£900; a Second World War German photograph album documenting campaigns in Russia and France at £200/£300 and an unusual set of postcard cartoons illustrated by an Austrian Prisoner of War. 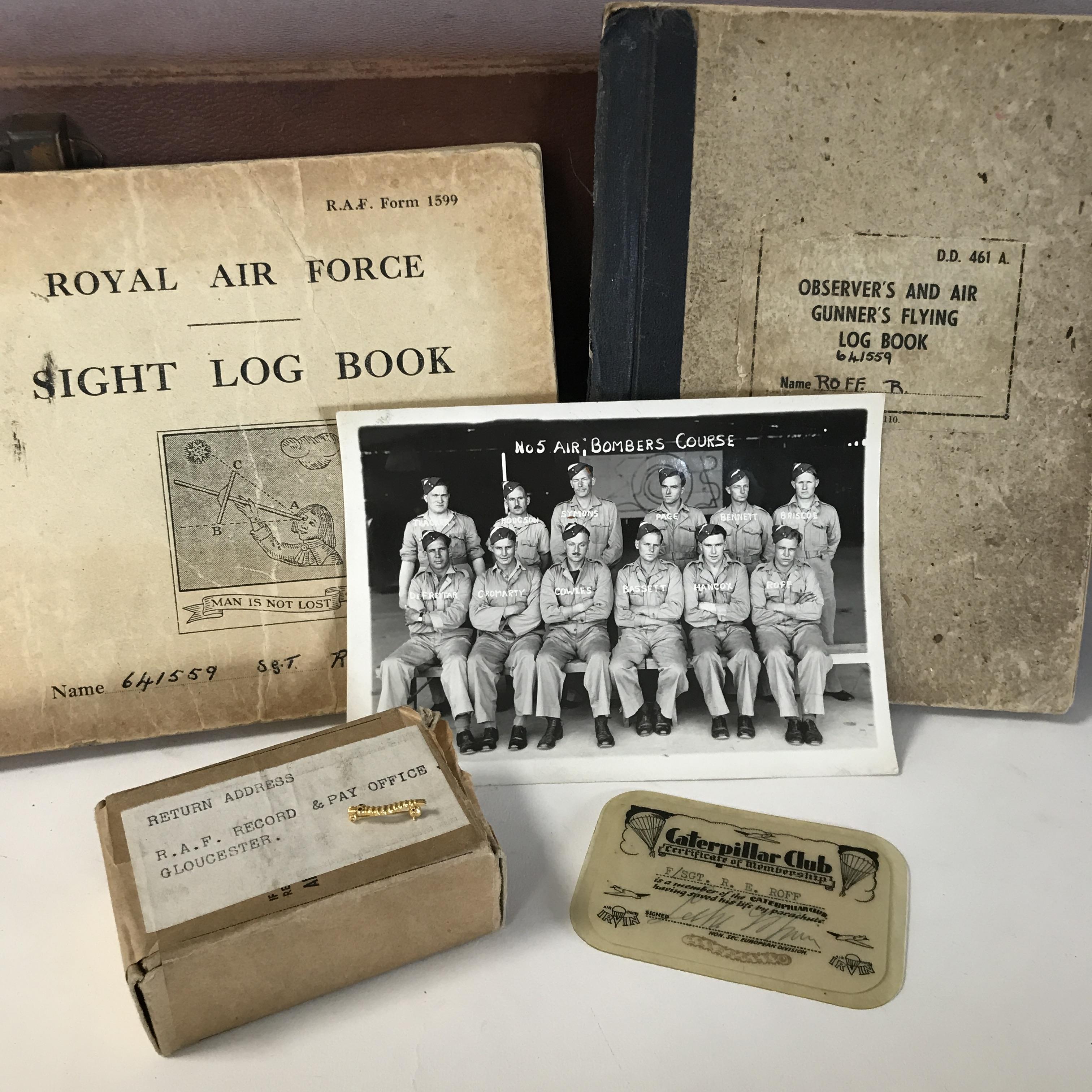 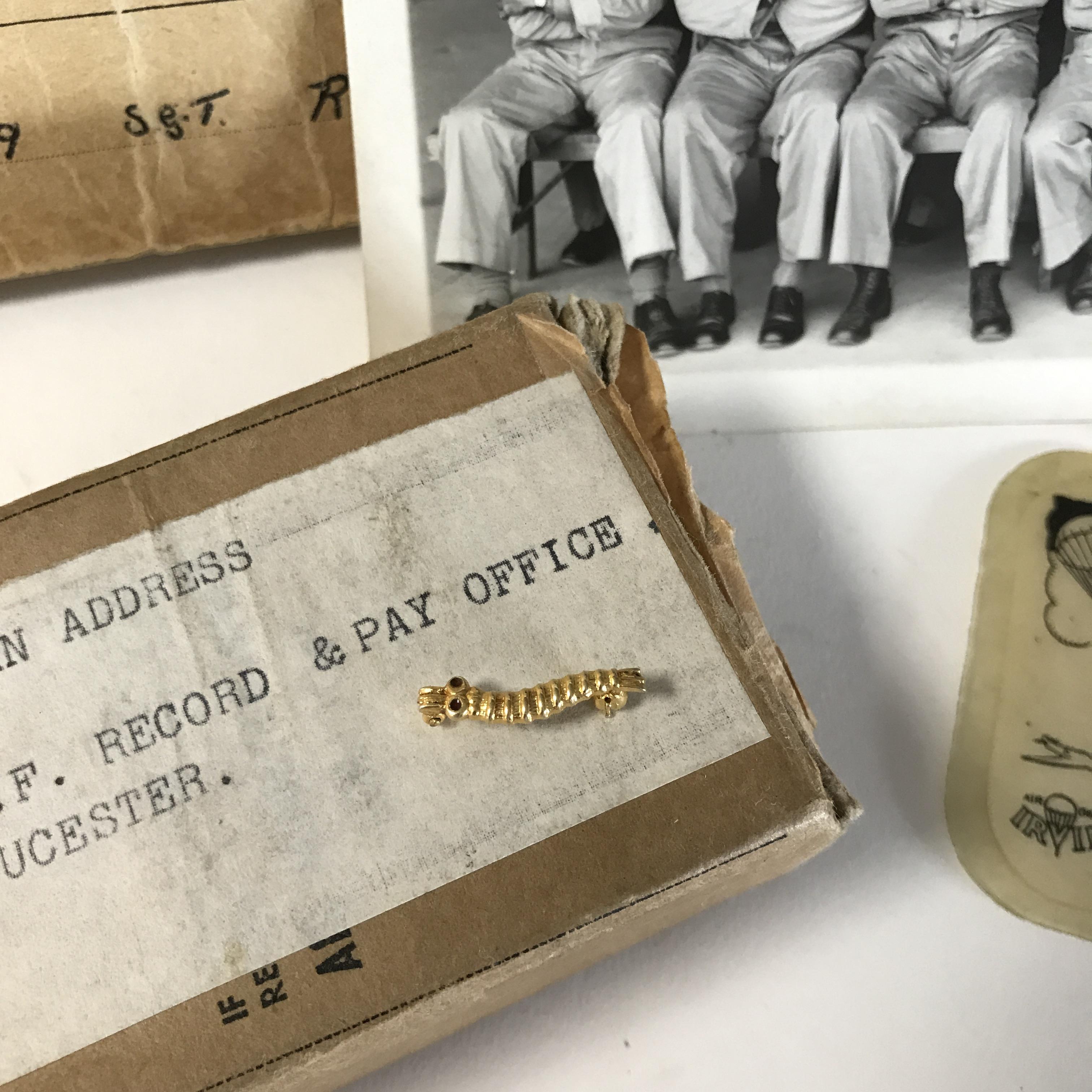 Notes: On 5th March 1945, 466 Squadron took off from Driffield airfield to undertake an operational flight to bomb Chemnitz. Due to un-forecast freezing fog clouds that occurred soon after take-off, a large number of the bombing force suffered problems due to aircraft ice – some of which crashed with fatal results. As the aircraft pilots began to lose control, bomb loads were jettisoned before some members of the aircrew including Roff bailed out and swam safely to shore. As Roff's aircraft and the remaining crew onboard began to descend below the freezing cloud, the ice receded and control was regained at just 800 feet above the ground, allowing for an eventual safe landing at Carnaby airfield. Sadly, one member of Roff's crew was lost due to a bad landing, believed to be somewhere over the Bridlington area. In total, F/Sgt. Roff flew over 207 hours with the squadron, of which 119 hours were night-time operations.

These eight illustrations by Richard Bayer, estimated at £180/£220, were created during his internship at Huyton Camp in Merseyside and were used as a form of communication between the inmates. Huyton Camp was home to over 5,000 German, Austrian and Italian civilians in 1940-41, most of whom were innocent refugees or exiles. Richard Bayer was a prominent political activist who attended secret Anti-Nazi meetings, led protest marches and came into conflict with the right-wing government. Facing the loss of his teaching job and potential arrest and imprisonment, Bayer travelled to England where he found himself interned as a possible ‘dangerous alien’. It was here that Richard employed his artistic skills by designing satirical postcards about life in the camp alongside commentary about the war. After his loyalty to Britain was established, Richard left the camp and moved to London where he worked as a sign-writer and poster-maker for the cinema industry. In 1941, he took a teaching post at Bradford Grammar School as an art master, where he stayed until 1966. It was during this period that David Hockney was a pupil, with Bayer becoming Hockney's tutor, mentor and lifelong friend.

Entries for this sale close on Friday 17th December. If you would like to discuss consigning items for sale, please get in touch with Caroline Dennard on: T: 01743 450 700 or alternatively by e-mail at carolined@hallsgb.com