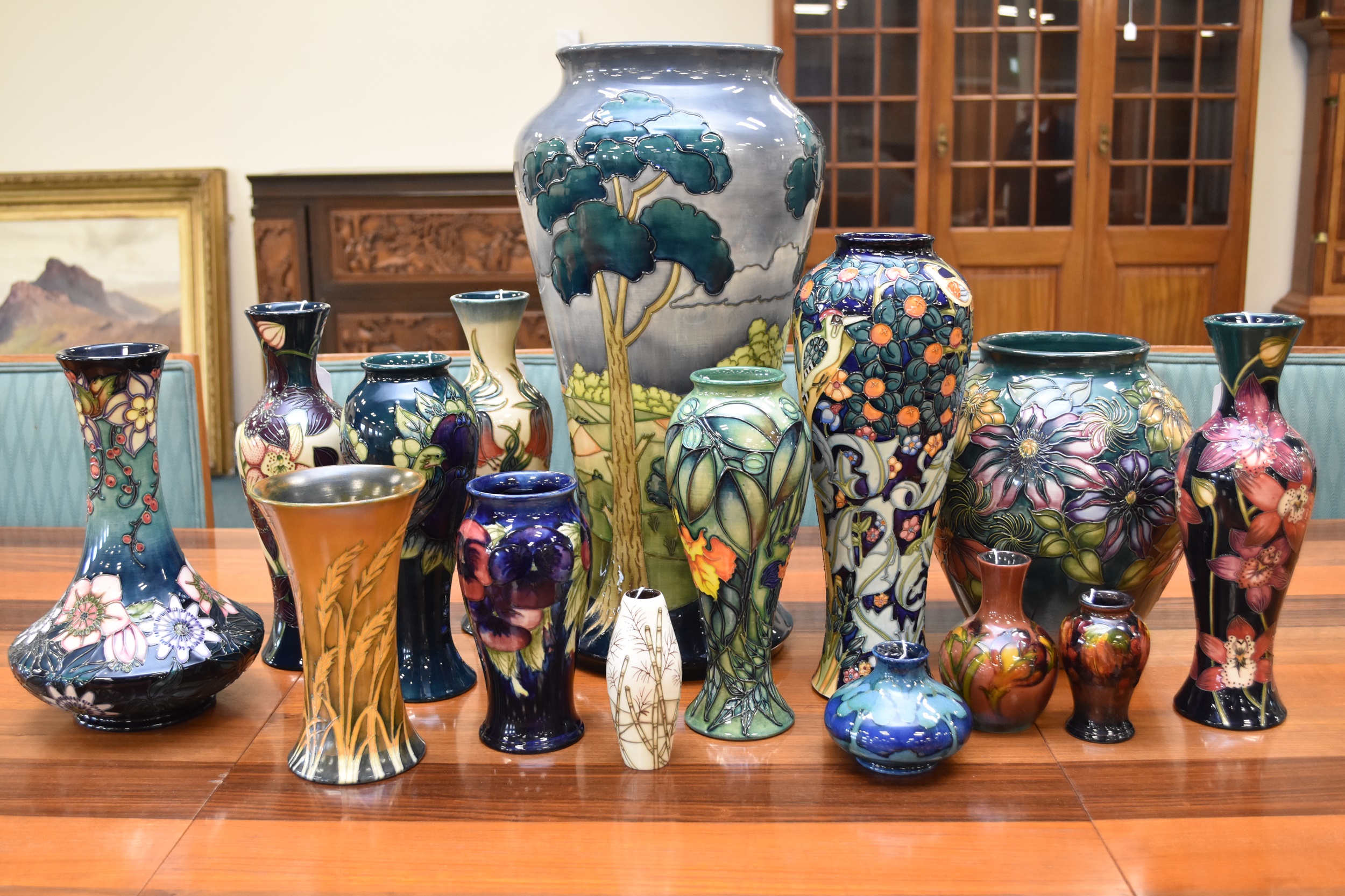 Halls Auctioneers are now welcoming entries to our forthcoming online timed Moorcroft pottery auction which  already includes over 200 lots of contemporary Moorcroft from a private collector.

The Moorcroft name is one with a rich and long history, with an appeal that has remarkably not diminished over time. This is in no small part due to a talented team of designers, who have succeeded in continually breathing fresh air into their work and seeking out new inspirations for patterns without ever appearing formulaic. It is for this reason that the factory in Stoke-on-Trent is a rare survivor of the now sadly, much-diminished, British ceramic industry and continues to thrive today.

The factory’s founder, William Moorcroft, showed promise from a very early age and undoubtedly took his inspiration from his father, who was a pottery and china designer and painter who specialised in flower painting. After studying at the Wedgwood Institute at the tender age e of twelve and later at the National Art Training School in Kensington and Royal College of Art, William entered into a relationship with the company James Macintyre & Co, Burslem.

It was this relationship that created the highly expressive and recognisable range of ‘Florian’ ware and these designs featured the delicate slip trailing that would soon become synonymous with the Moorcroft name and set the course for a factory which continues to be much loved and admired. Despite the eventual relationship breakdown between Moorcroft and Macintyre in 1913, he was not put off and went on to found his factory in Stoke-on-Trent.

Custom-designed and funded in part by the eminent retailer Liberty, this new working space gave William the facility and confidence to create some of the most desirable pieces of his career. The bold, rich work of his 1920s period includes patterns such as Eventide, Claremont and Hazledene and perfecting glazes such as his Chinese-inspired flambé wares. Items from this period in the sale include the evocative ‘Moonlit Blue’ and ‘Waving Corn’ vases.

William’s love of ceramics was clearly infectious and the factory stayed in the family when it was taken over by William’s son, Walter, after his death in 1945.

Following a difficult period during the 1980s recession, the factory was taken over and saved by Hugh Edwards and Richard Dennis. Dennis’ wife, Sally Tuffin, took over as the factory’s art director and it was her designs, several of which feature in this auction, which helped to secure Moorcroft’s future.

Notable pieces include the large variety of modern pin dishes, which are marketed at a very affordable level and offer the potential for new and old Moorcroft collectors alike to add new patterns to their collections. The majority of items in this collection are of small stature and therefore conform to modern tastes (and homes!), offering the chance to own a small slice of British design without compromising on space.

For those more inclined to the showcase pieces, the sale includes a large and impressive ‘After the Storm’ vase which was produced in a limited edition of 200 pieces and stands at an unmissable 51.5cm high.

Halls fine art auctioneers are now welcoming entries to auction (24th March – 4th April). This sale already includes a large collection of predominantly contemporary Moorcroft that was lovingly formed over many years by a private collector in Criccieth, Wales. As members of the Collector’s Club, Peter Richards and his wife Jean assembled over 200 different pieces which will now all be sold at the auction.

We are accepting consignments for this auction until the 6th of March and can offer no-obligation appraisals on individual pieces or large collections.

If you would like to discuss selling, please get in touch with Caroline Dennard at 01743 450 700 or via e-mail at carolined@hallsgb.com