These are a few of our favourite things...The Christmas Auction

Chosen by our specialists

This auction is our last of the year.  It has been a trying year but we have worked hard during lockdown to bring you an auction with an excellent mix of jewellery, silver, ceramics, watches, coins, art, clocks, furniture, paintings and more.  With just over a week until the sale we thought we'd share a few of our favourite lots with you.

Lot 424 - Great proportions and even the veneers on the stiles and rails are matched. Super.

I think that lot 427, the George I figured walnut chest on later, Restoration style stand will do well. Note the matched figured veneers, the use of feather-banding etc., originality and the colour and figuring are way above par. It should get a good result! Lot 433 is a really solid GII mahogany mule chest.  Again, the figuring and colour are great.  It should attract quite a few bidders.  Lot 424 is a really good lot. Chippendale style of course and of the period with great proportions, but again look at the choice veneers and even the veneers on the stiles and rails are matched. Super. 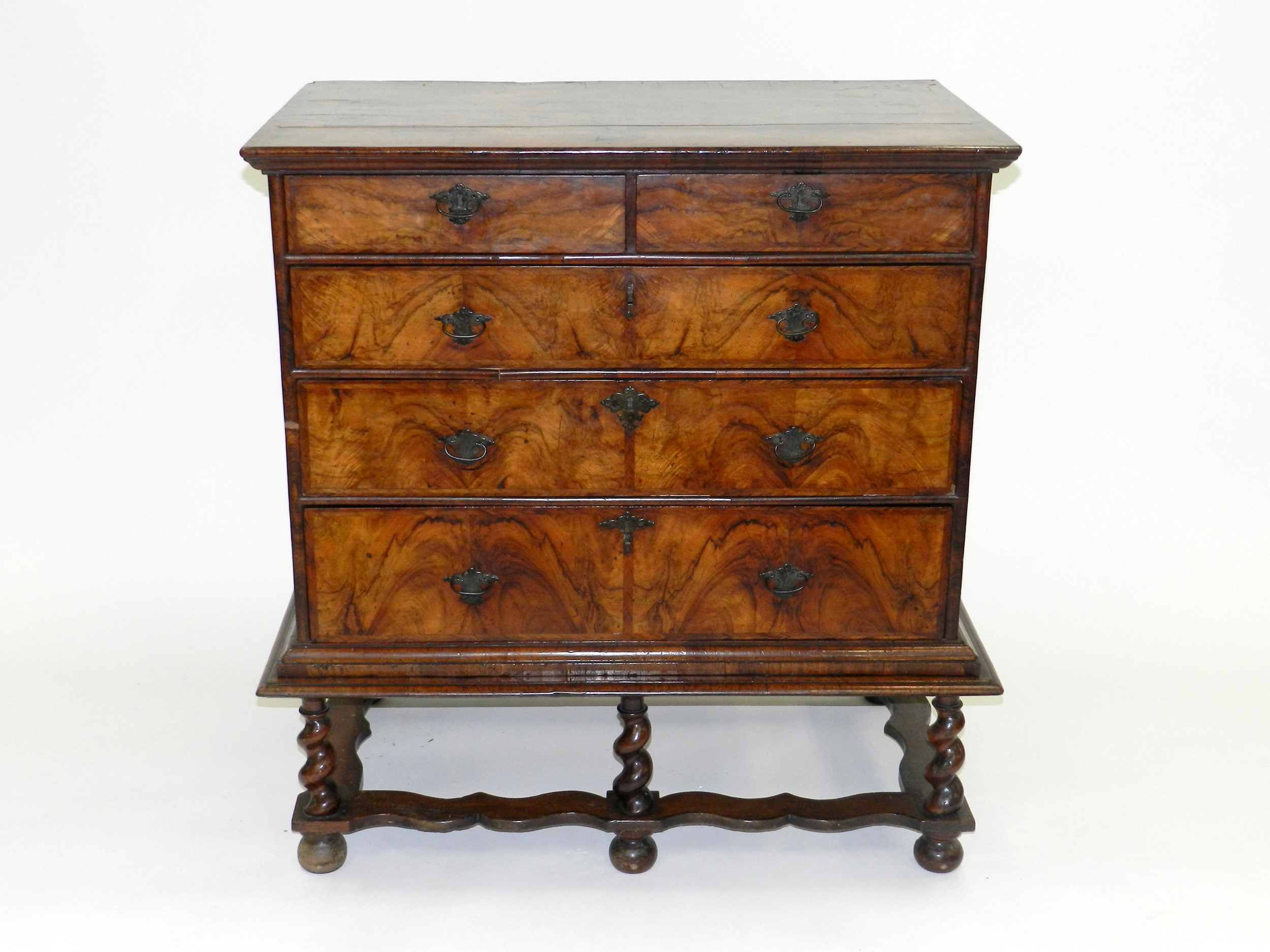 Lot 272 - That’s an exciting lot because it offers collectors the full Martinware experience
– but at a much more affordable price.

Martin Brothers, lot 272. That’s an exciting lot because as a small incised vase, it offers collectors the full Martinware experience – but at a much more affordable price than the likes of their grotesque birds, which regularly fetch £15,000+. At an estimate of £300-£400, this is the perfect lot for an entry-level collector to begin their journey collecting quality items from the important British Arts and Crafts movement.

Lot 9 - A stylish addition to the Christmas table this year.

A stylish addition to the Christmas table this year could be lot 9, a set of Cartier silver and gilt salt and pepper shakers. Presented within their original box, their simple yest stylish design will never go out of fashion. 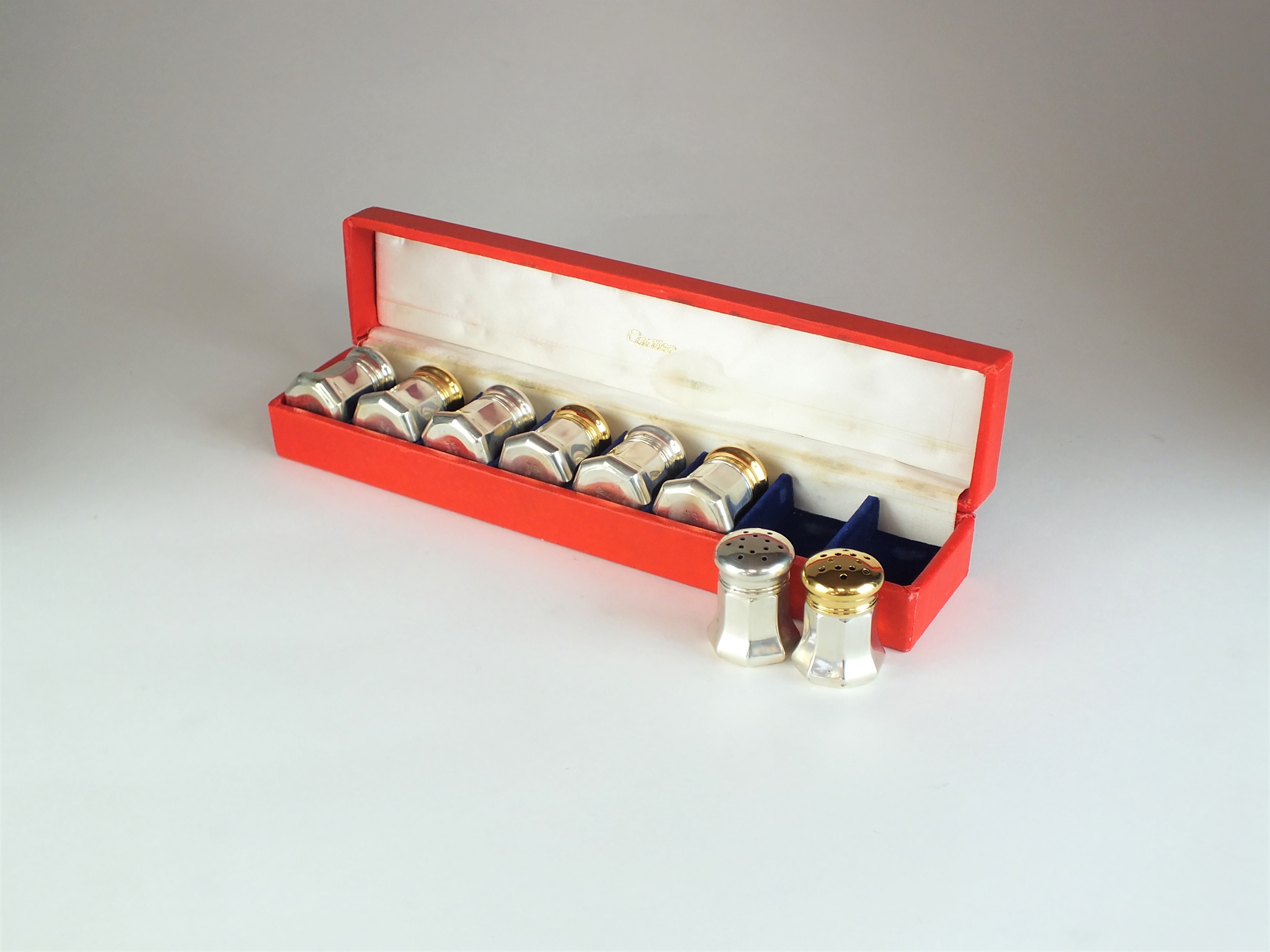 Dog lovers be at the ready, this little chap made of solid silver is sure to gain many admirers. Hallmarked for 1983 and modelled as a miniature Dachshund, at only 3cm high, anyone can make space to give it a new home! 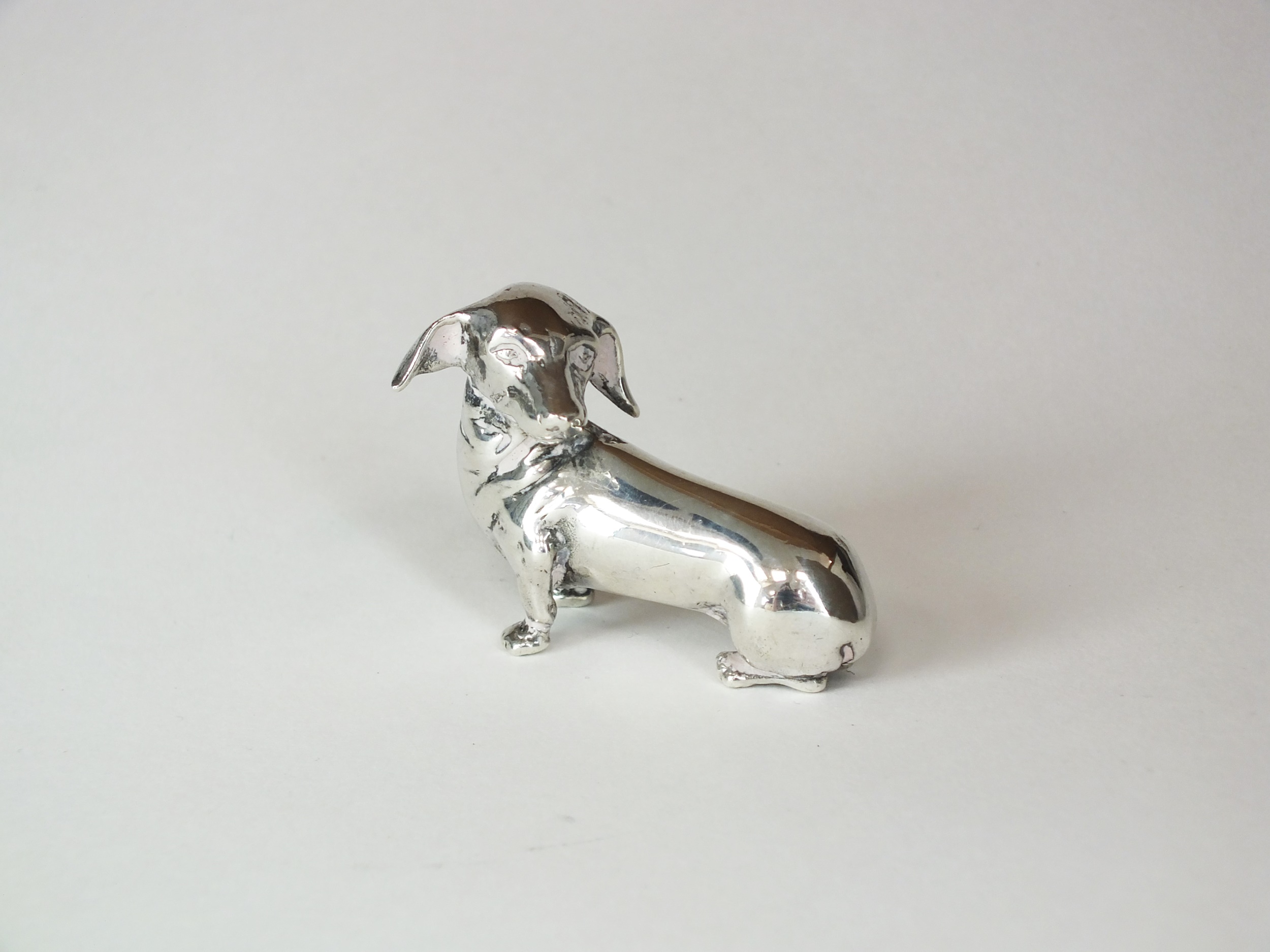 Lot 70 - Are you looking for a statement ring?

If you’re after a statement ring, this ruby and diamond abstract cluster is the perfect choice. Offered at £400-600 it is one of numerous rings within the auction ranging from £80 to £8000. 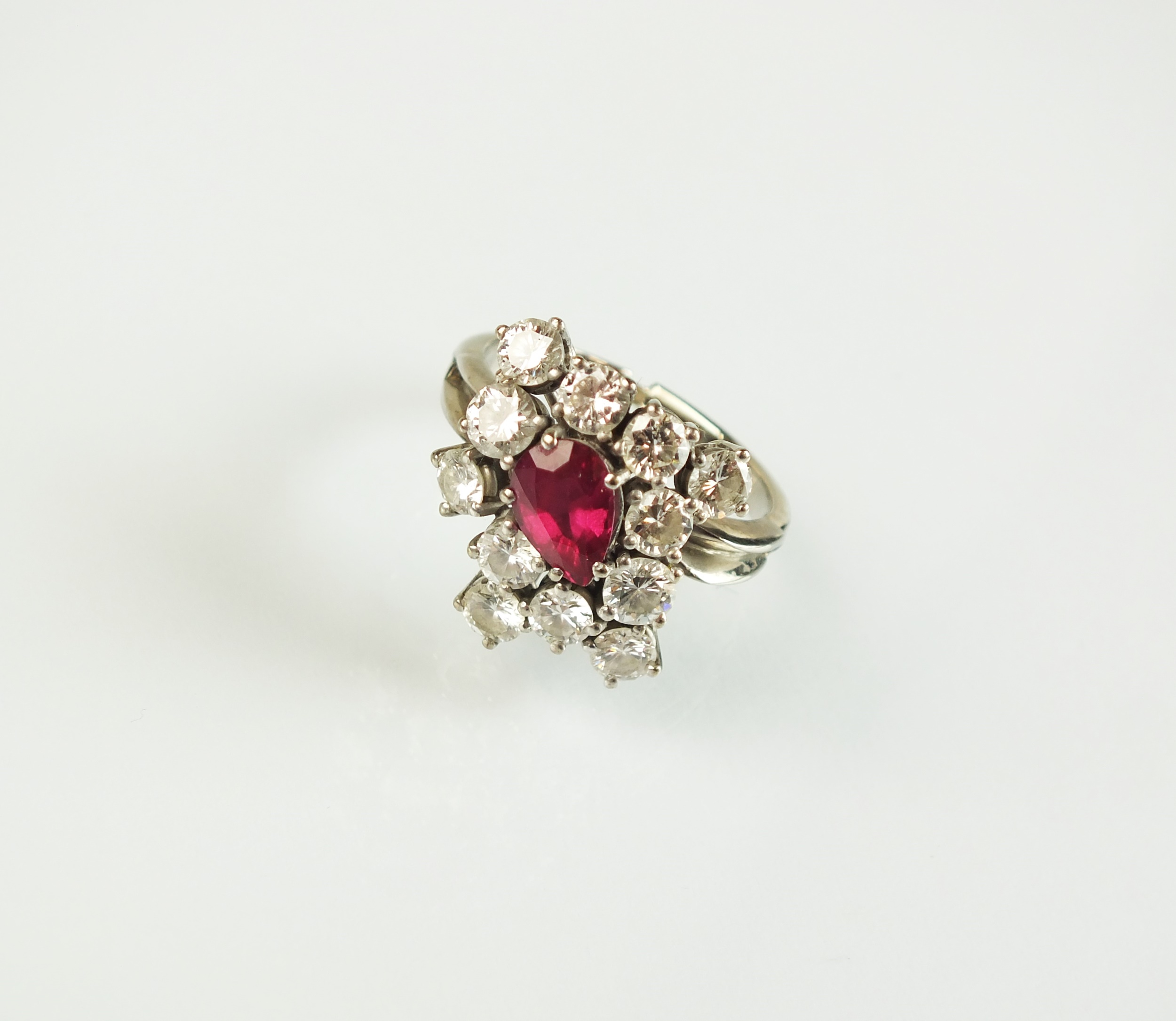 This is not the most valuable lot in the auction but is a charming example of soapstone carving, even though the head has been re-stuck.  Perhaps more remarkable is that its owner is over 100 years old and used to keep the figure close at hand in case she ever had to fend off an intruder – which happily never happened! 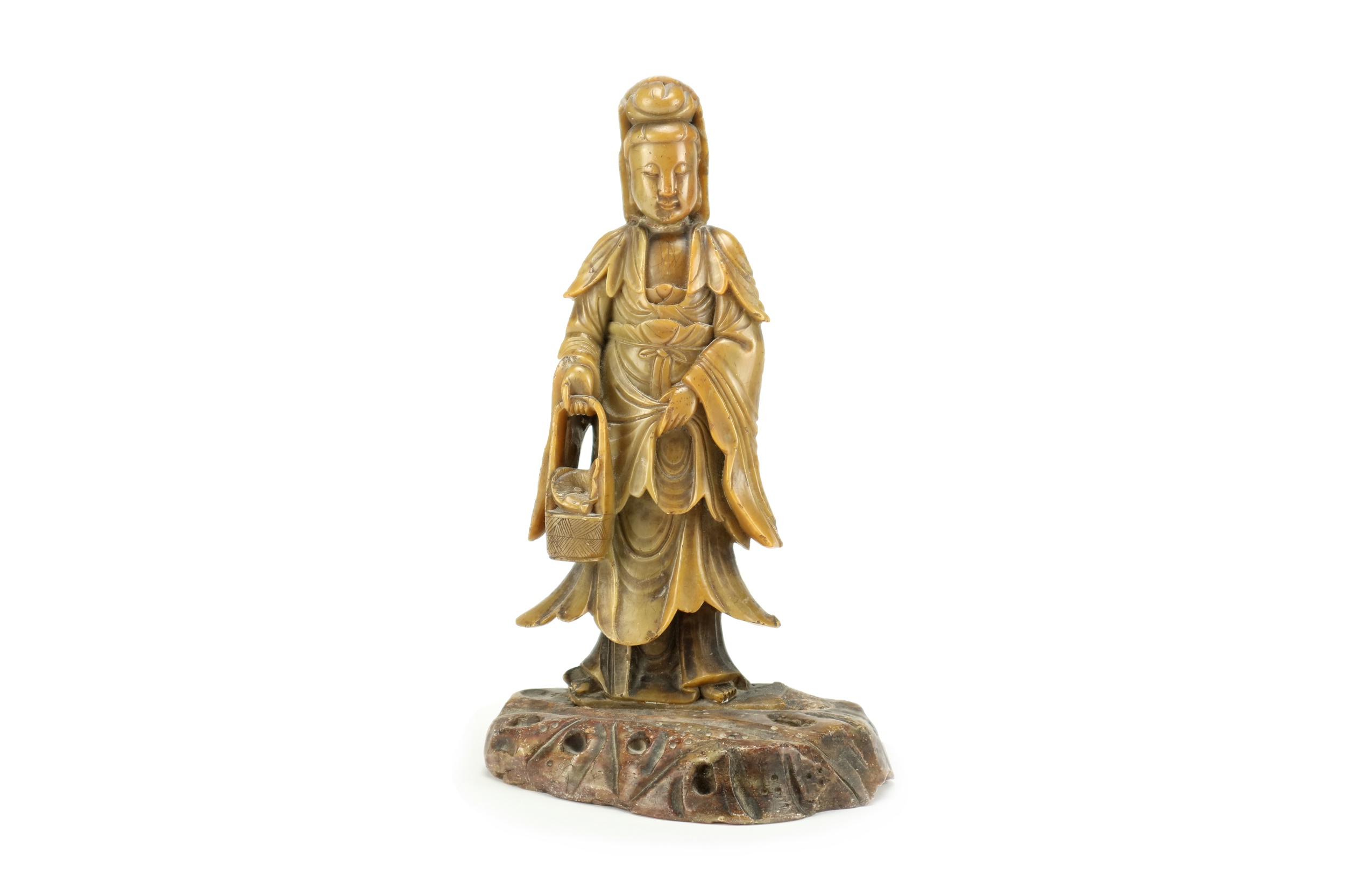 Lot 455 - The marquetry inlay is about the finest I've seen in my career.

The marquetry inlay to the top if this table, executed in the manner of Jan van Mekeren, is about the finest I have seen in my career.  Unlike so much British and Continental marquetry of the 19th century which, though beautiful, is rather one dimensional, this has incredible depth and movement.  In addition, the carved supports and x-form stretcher make this a really stylish table, found in original condition. 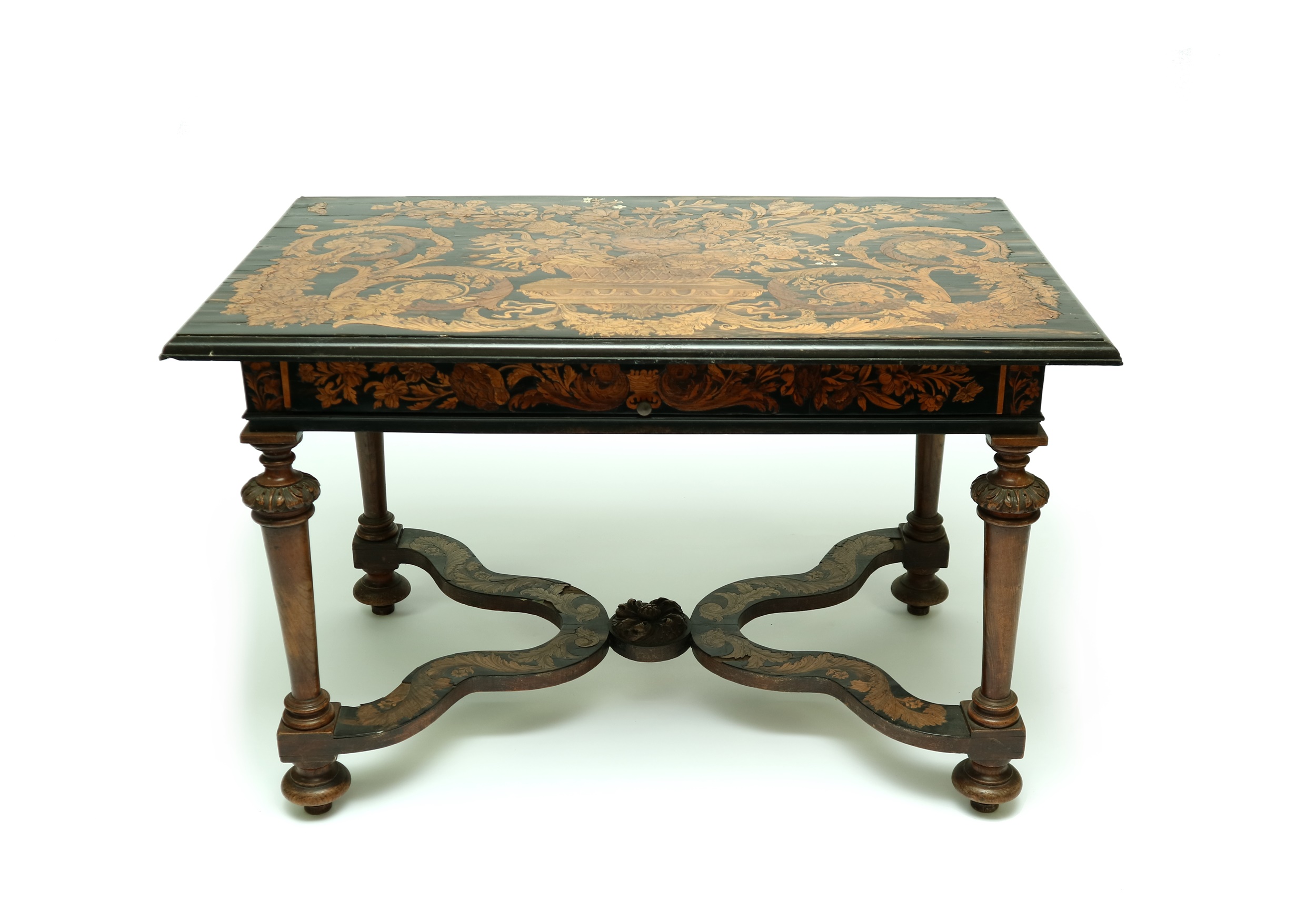 Another beautiful example of Continental furniture, this carved and painted chest from Italy bears a painted scene depicting the vestal virgin Tuccia bringing a sieve of water to the temple.  It’s a rare object with so much charm and in largely unrestored condition.

Lot 454:
A 17th century, Italian, Baroque style cassone
The lid painted with a central cartouche enclosing a tree, flanked on each side by grotesque-like decoration,
including masks, dolphins and foliate scrolls, the conforming sides with wrought iron carrying handles,
the inverse breakfront painted with a panel depicting the vestal virgin Tuccia bringing a sieve of water to the temple,
flanked on each side by a lion’s mask holding a fruiting pendant on carved mask feet.
128cm wide x 53cm deep x 65.5cm high
Estimate: £1,500 - £2,500

Lot 337 - Steeped in ceremony and cast with fantastic detail.

Objects made during the Ming Dynasty are always exciting, especially when they survive well and this gilt bronze buddha is a fine example.  Steeped in ceremony and cast with fantastic detail, this figure has retained most of its original gilding with just the right amount of patina.  They usually generate interest from collectors in mainland China as well as those in the West and so that often makes for an exciting round of competitive bidding. 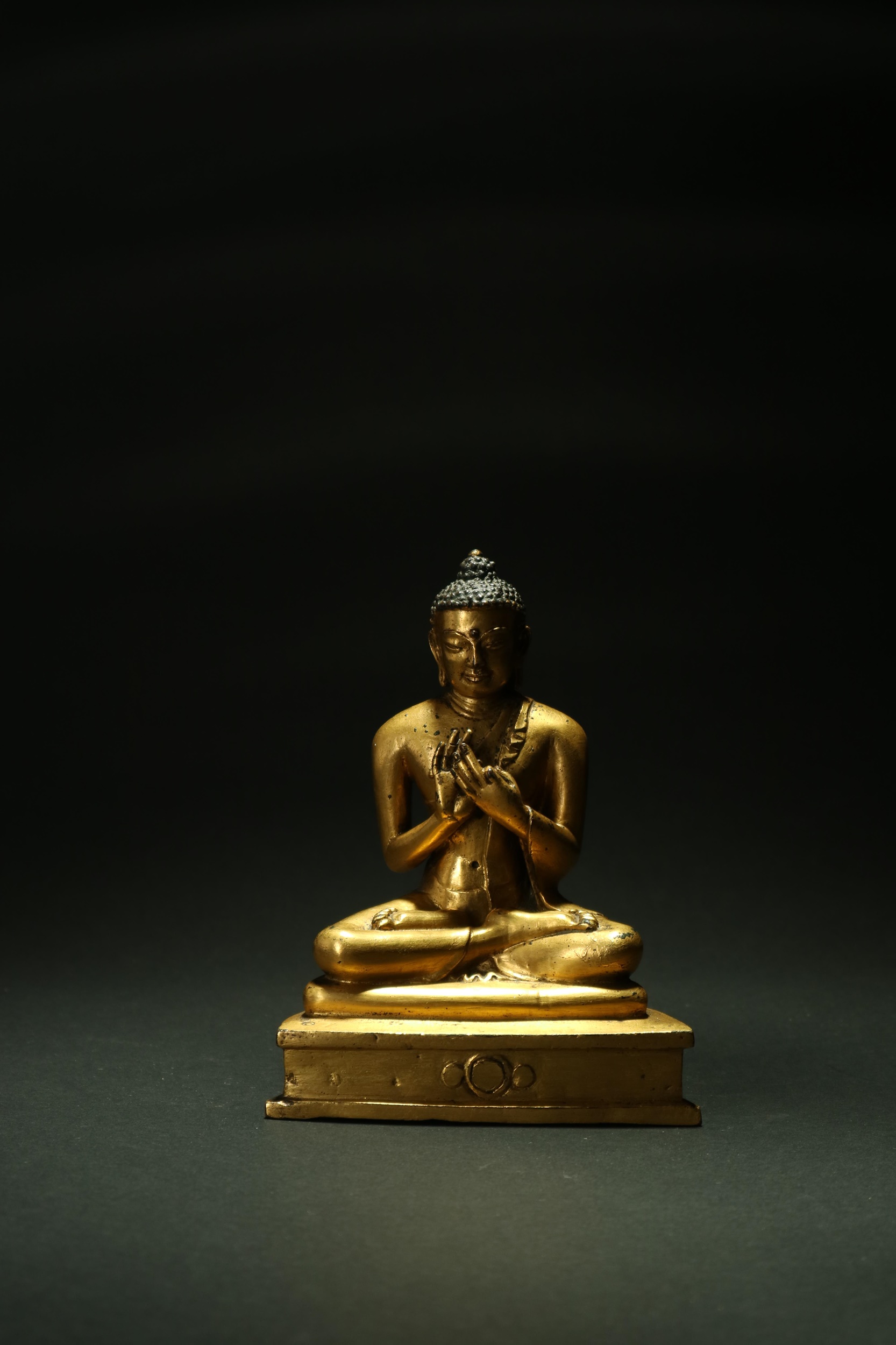 Lot 337:
A good Tibetan gilt copper alloy figure of Shakyamuni Buddha, 15th century
Finely modelled seated in dhyanasana on a shaped base,
the hands at the chest in dharma chakra mudra, wearing a sanghati draped over the shoulder and over the legs in folds,
the face with serene expression, the long ears cut with vertical holes, the hair arranged in tight curls surmounted by a domed ushnisha,.
17.5cm high
Estimate: £6,000 - £8,000

Lot 192 - A superb collection of half crowns. 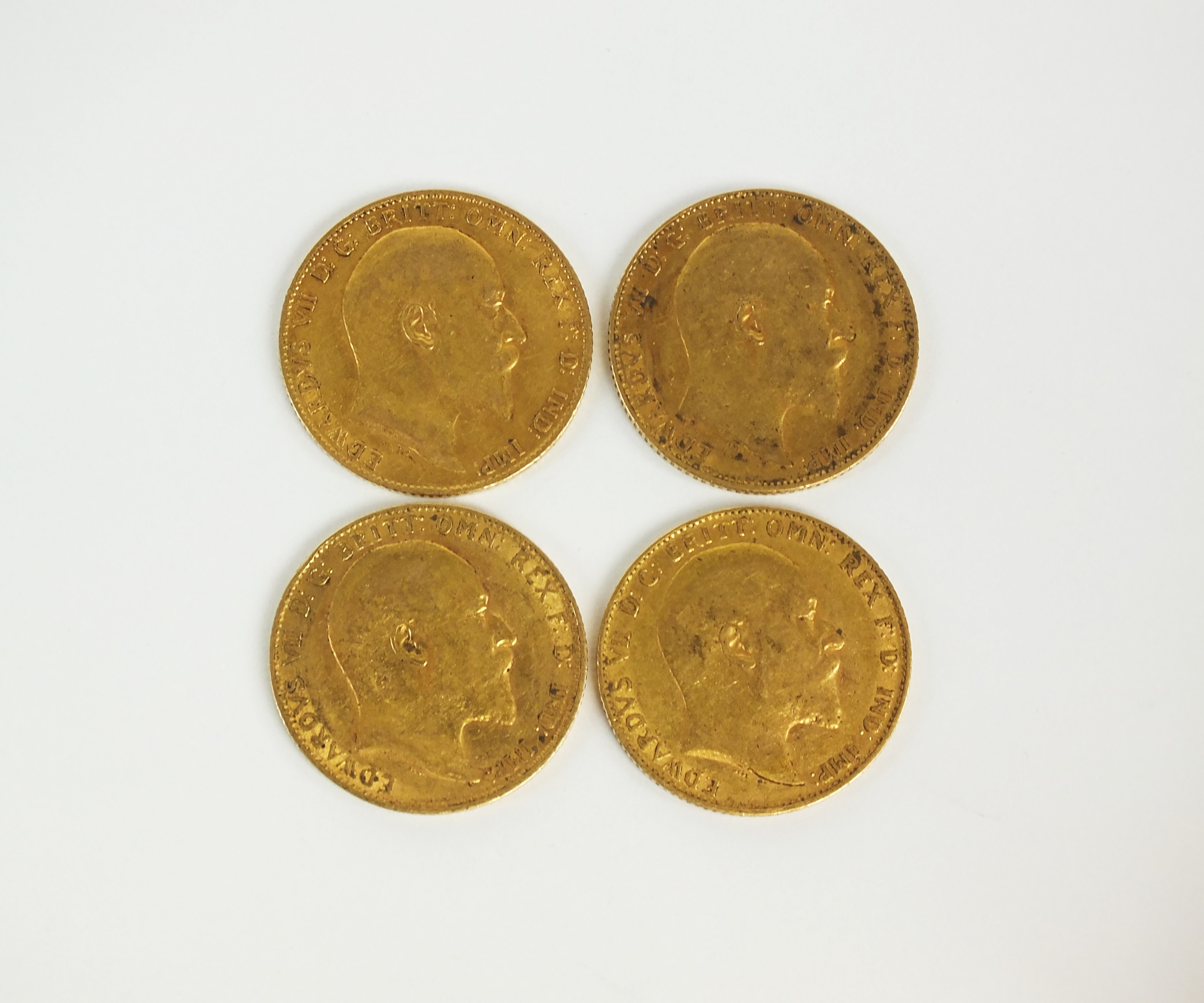 Lot 241 is a folio of etchings by French artist Auguste Lançon dated 1870-1871. This is one of my absolute favourite lots in the sale as the images he created are so expressive and haunting. He created a series of etchings based on his experiences of the Franco-Prussian war during which he was captured, spending 6 months as a Prisoner of War. Rather than celebrating the heroics and victories of the campaign, Lançon's  etchings convey the suffering of the civilians and soldiers, depicting the horrors of wartime through these very moving and emotive images. 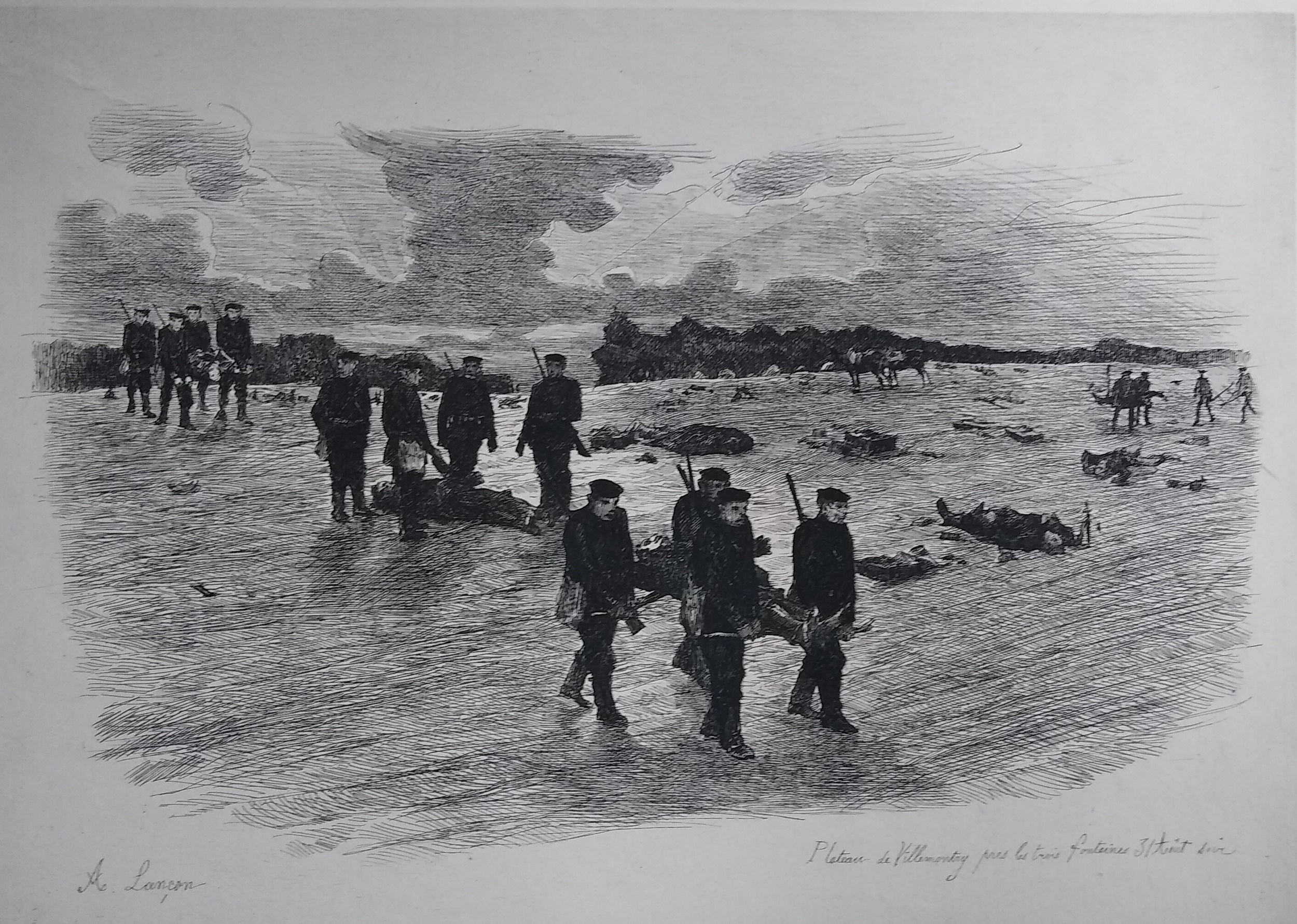 Auguste Lançon was a French artist known for his etchings of military scenes and animals. During the Franco-Prussian war 1870-1871 he was a sargeant of a batallion and was captured, spending six months as a prisoner of war. He created a series of 70 etchings based on his experience of the conflict and exposing the horrors of armed conflict.
Estimate: £300 - £500

Lot 217 - I love the way the artist has depicted the folds of material of the figure's cloaks, how they drape onto the floor.

Another of my highlights from the Christmas sale is lot 217, an oil on panel depicting Vertumnus and Pomona, which is attributed to Charles Victoire Moench (French 1787-1867). The tale of Vertumnus and Pomona is a myth of the Roman era, taken from Ovid's Metamorphoses. Vertumnus was a god of the seasons, gardens and fruit trees who was enamoured with Pomona, a beautiful wood nymph who dedicated herself to cultivating her orchard and rejecting all potential suitors. He disguised himself as an old woman in order to gain entry to Pomona's orchard and sought to convince her to choose the youthful and handsome deity Vertumnus. He then transforms and reveals himself in his true form in order to woo her.

I love the way the artist has depicted the folds of material of the figure's cloaks, how they drape onto the floor, combining light and shadow in a manner that gives the impression of texture and also alludes to outline of the figure beneath. The artist has incorporated a basket of apples next to Pomona, one with a cheeky bite taken out of it, as well as the mask and walking stick from Vertumnus' disguise lying discarded upon the floor. 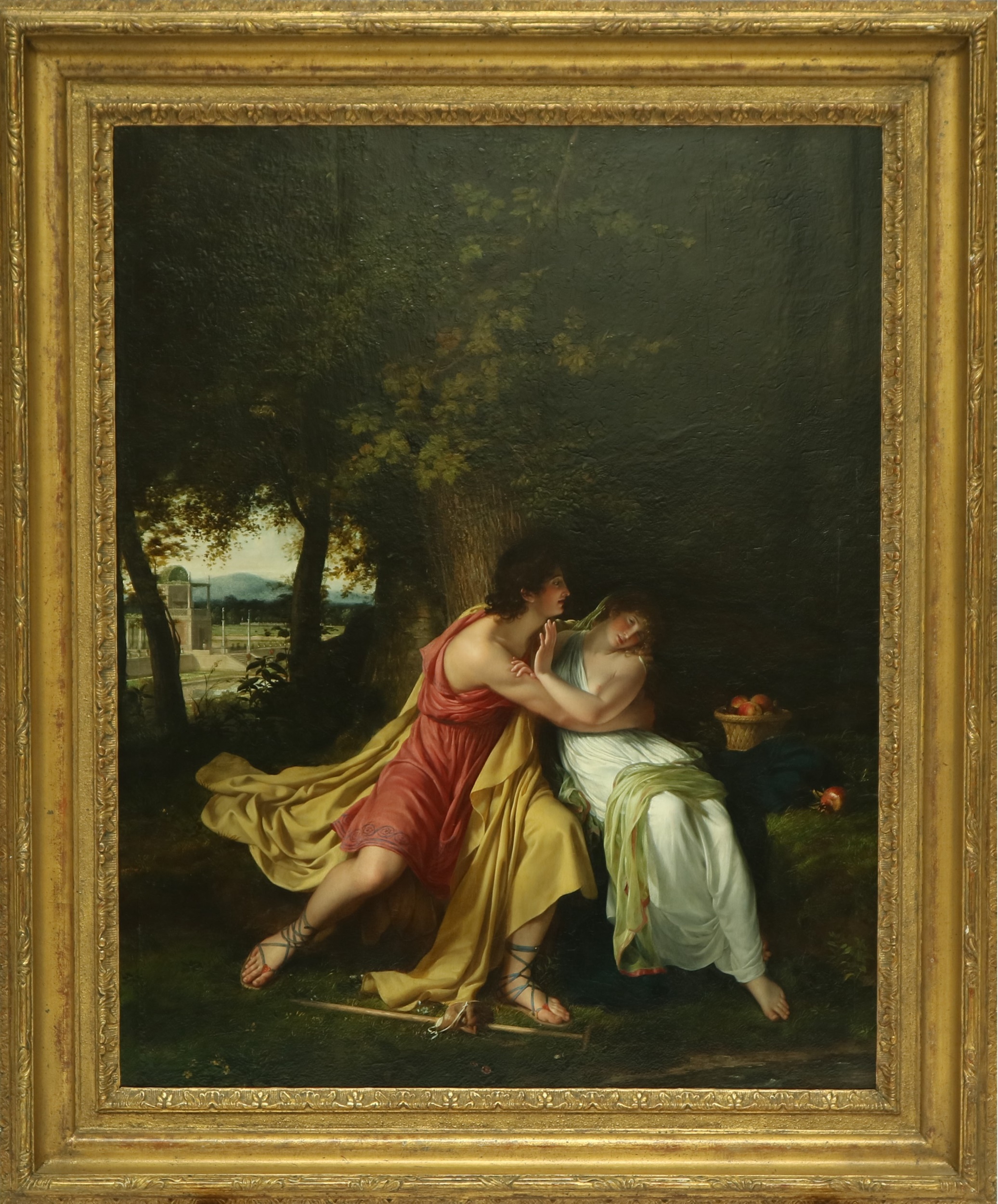