The Contents of Castell Gyrn

Senior valuer Alexander Clement takes a look inside a genuine Welsh Castle at the many luxurious bespoke pieces of furniture and works of art that will be coming up for sale in February.

There is a long tradition of building in historical styles, particularly when it comes to the grand enterprise of an imposing dwelling. Castell Gyrn, designed in the 1970s by architect John Taylor as his home, follows a line of descent including Lutyens’ Castle Drogo in Devon (1911-1930) and Walpole’s Strawberry Hill in Twickenham (1749-1776). Each looks as though it were built centuries earlier and with the passage of time, as they settle into their landscapes, the illusion only improves. In some cases, the illusion is paper-thin but in the case of Castell Gyrn it is as substantial and lasting as the genuine article. 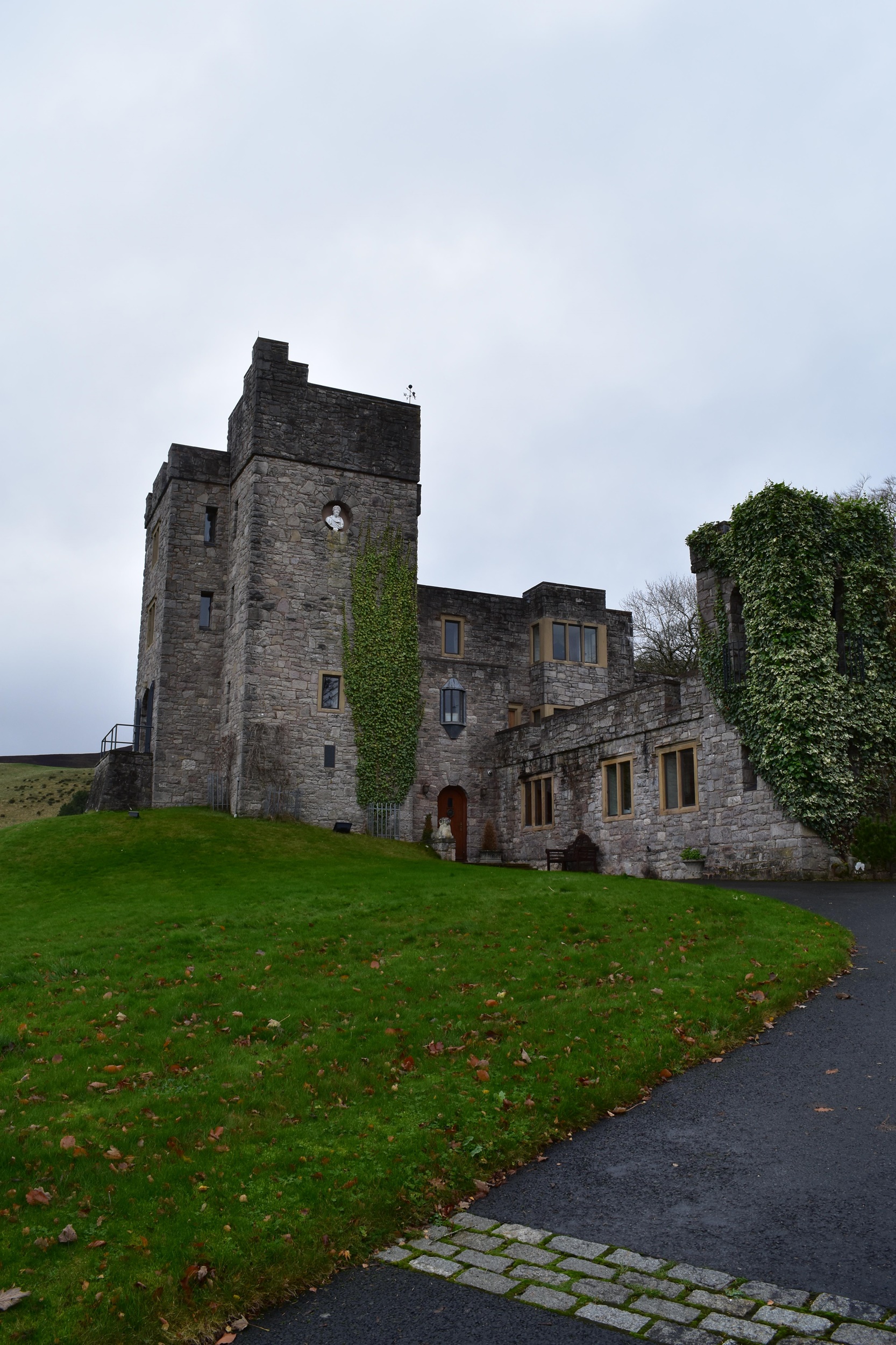 Castell Gyrn on approach from the main driveway

What surprises the most, perhaps, is the contrast between this picturesque castle and the other works in Taylor’s architectural oeuvre. As a senior partner of the Chapman Taylor practice, his firm designed and built the New Scotland Yard building in Victoria Street, and Caxton House in Tothill Street, London. But Taylor was an advocate of ‘architecture’ holistically and did not cling to a particular style. His genius was the ability to adapt to the style demanded by the brief but also with sensitivity to the surrounding landscape. He was a strong believer in local materials and at Castell Gyrn, nestled on a prominent hill in the Clwydian range near Ruthin, he utilised local granite for its construction. 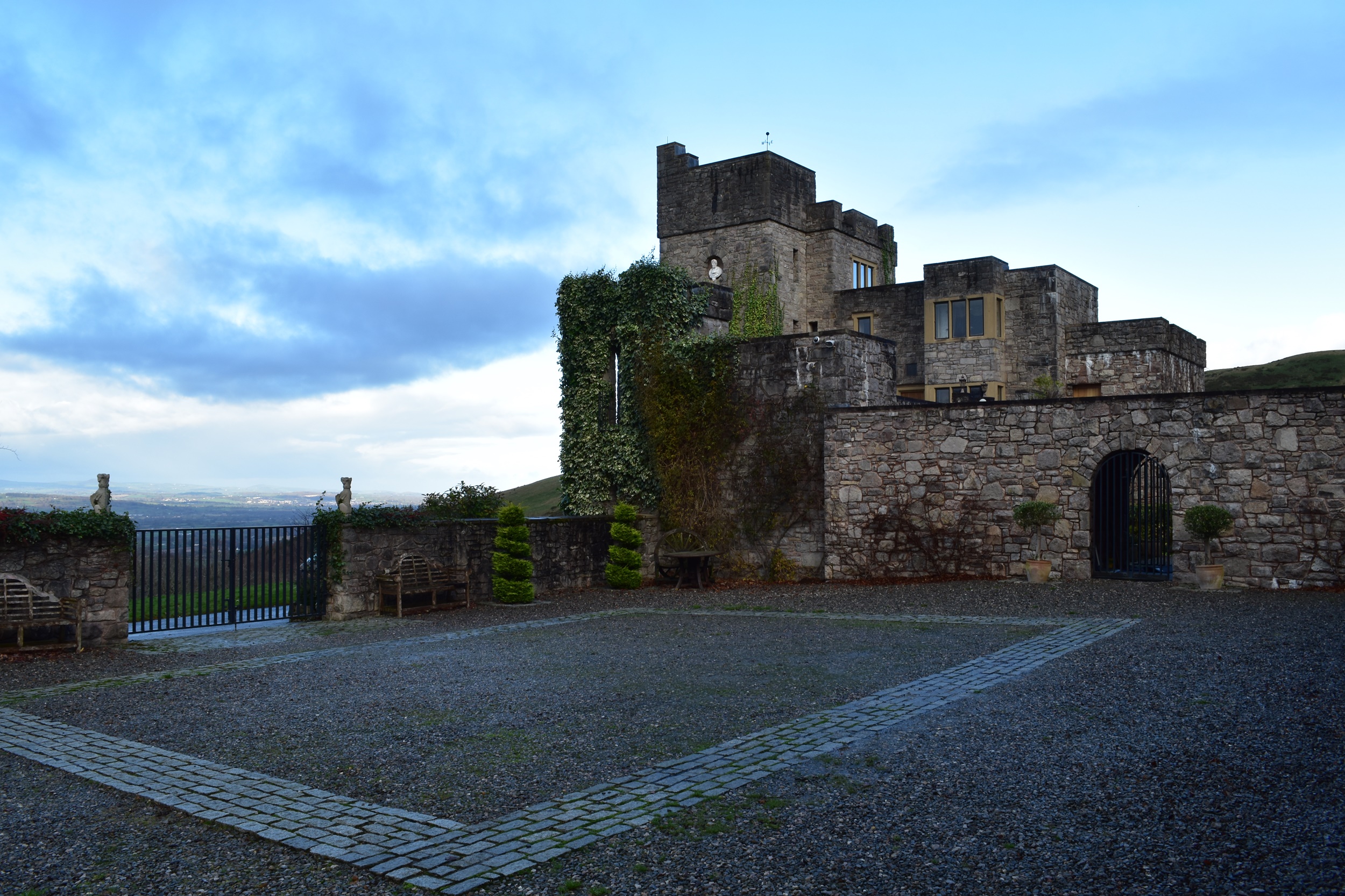 The enclosed courtyard with panoramic views beyond of the Clwyd valley

In addition, as the structure evolved, local artists and artisans were commissioned to add details and features like wrought iron gates and exterior sculptures. Looking at its beauty today, how it complements the site so well, one can scarcely believe that planning permission was originally refused and required an appeal, calling in the might of Clough Williams Ellis to see it granted. Even then, the use of battlements was rejected. Taylor was forced to invoke an ancient bye-law, the ‘License to Crenellate’ by petitioning HM The Queen. This, too, failed but a further appeal secured the permission needed to complete the building as a proper castle.

The castle’s most recent owner, and Halls’ present vendor, took on a project in need of further sensitive recommissioning and continued the tradition of using local artists and materials in the process. Determined to make it a home for many years, they fended off overtures from at least one international pop star as well as, according to the tabloid press, the then Manchester United manager Jose Mourinho who wanted to buy it. Cabinet makers and interior designers who were highly skilled at bespoke projects were selected over ten years to create the comfortable and luxurious setting demanded. Many of the pieces of furniture, as well as other features, were made by Clive Christian with others by Charles Barr along with purchases from renowned regional retailers. 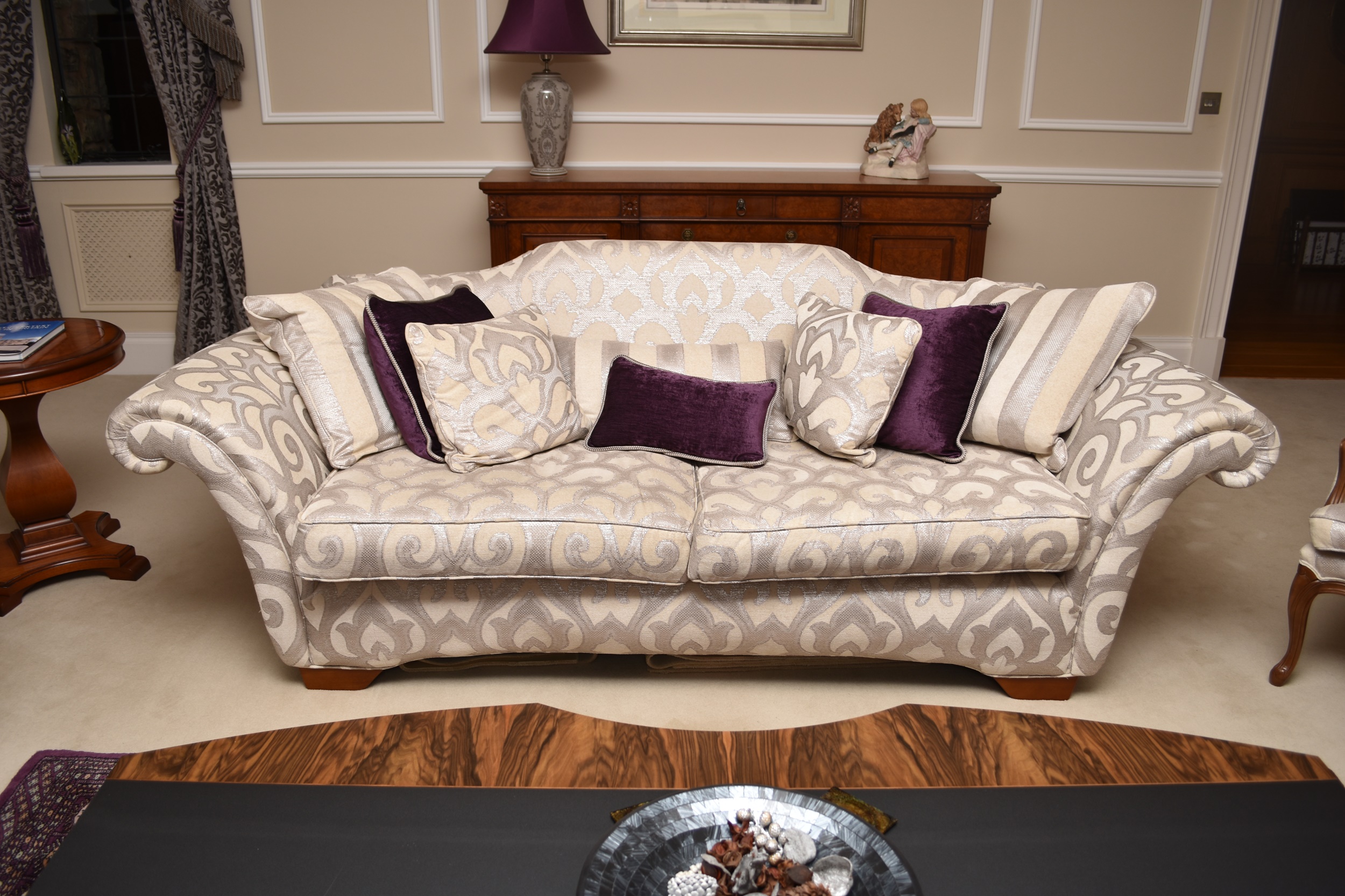 One of a pair of sumptuous hand-made three-seater sofas 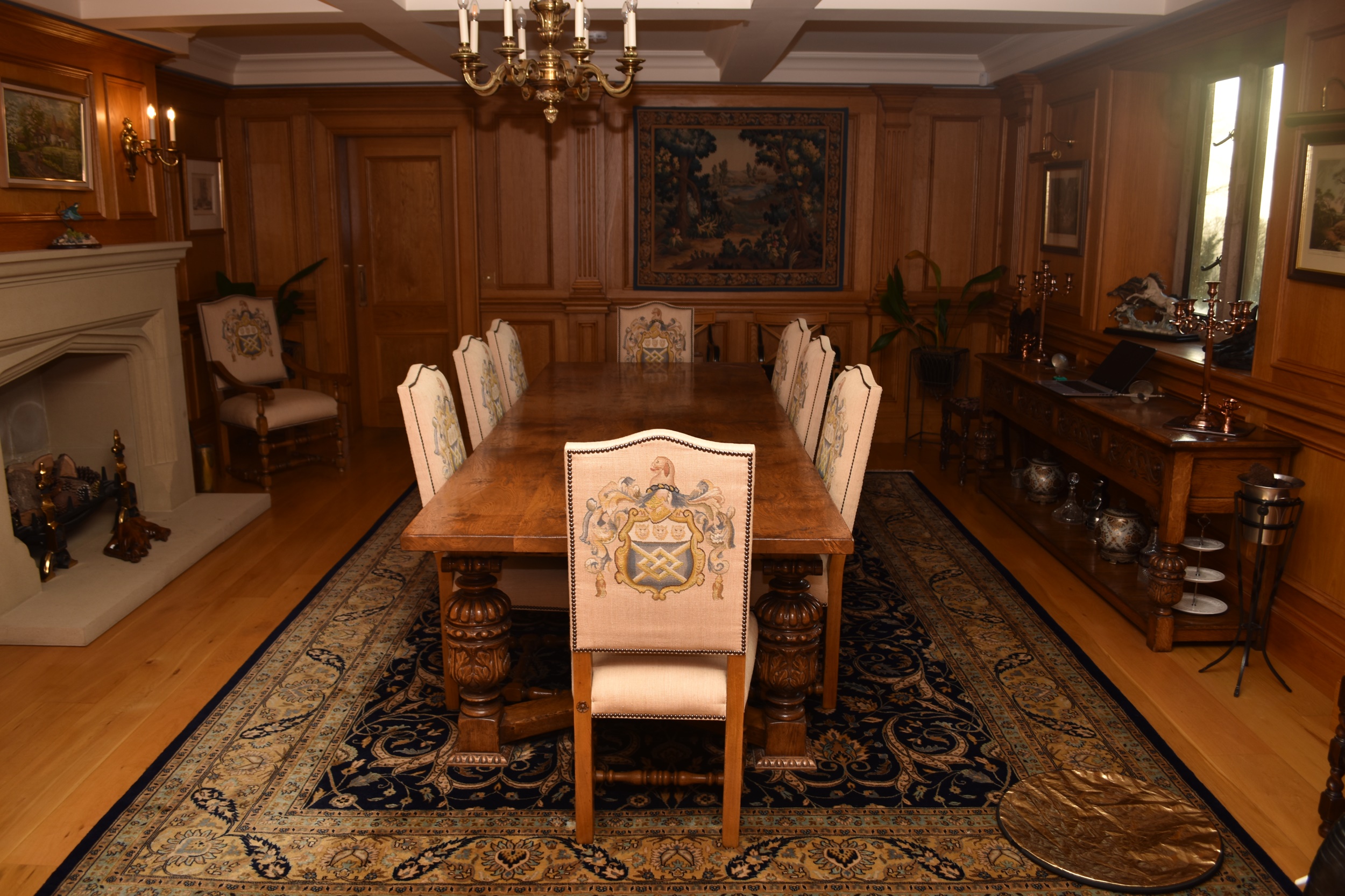 Now moving out of the area, our vendor has placed almost all the furnishings and many of the decorative features in auction, due to be offered on 3 February 2021. For anyone looking to furnish a new home or redecorate, there are some terrific prize pieces to bid on, all of which are in remarkable, almost showroom, condition. The benefit of hand-built British quality is its longevity and sturdiness, coupled with great style. And with auction hammer prices anticipated to be significantly below the retail cost, this is a great opportunity to buy the finest quality without breaking the bank. 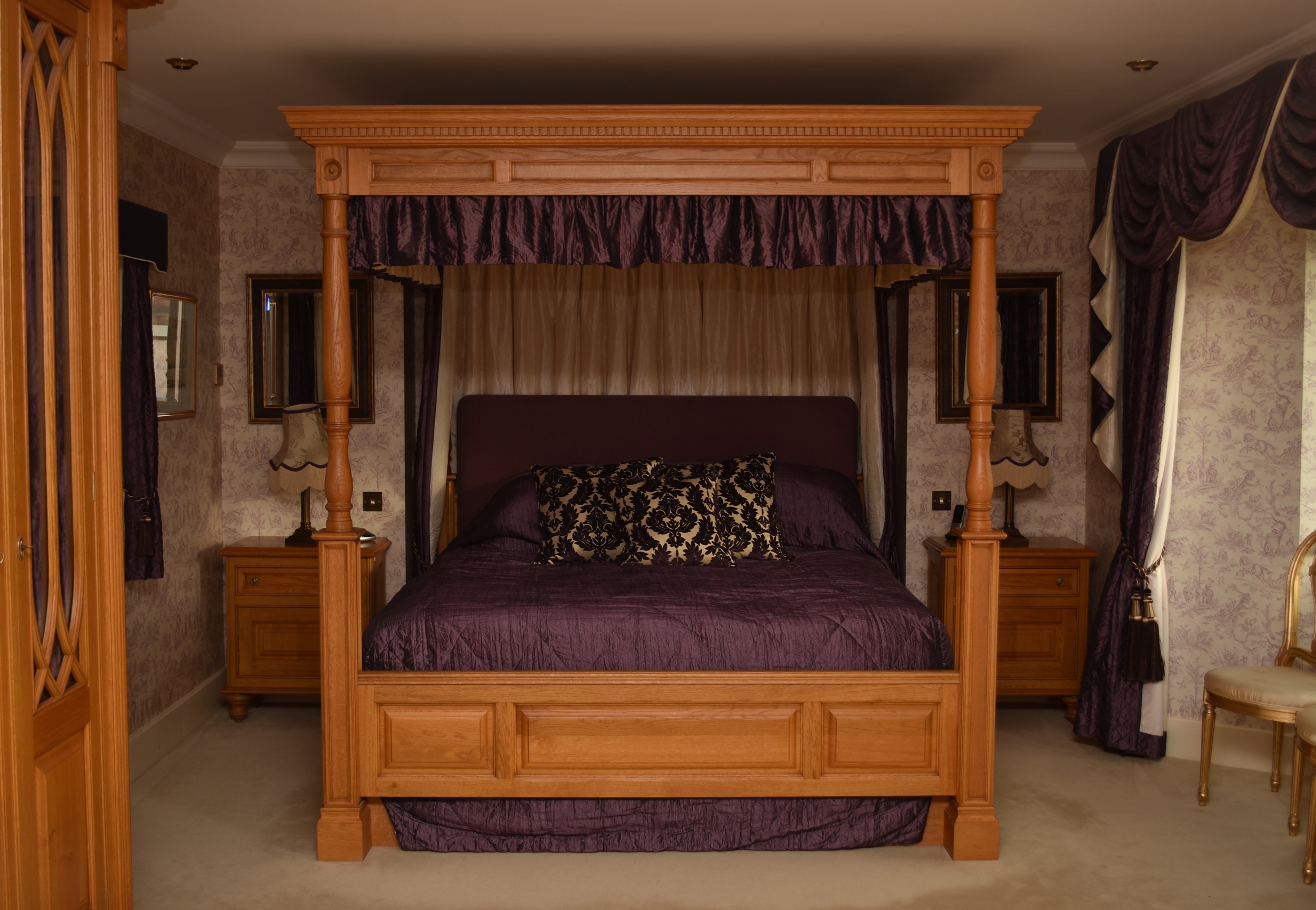 And if your home really is your castle, you can adorn it with accent and conversation pieces like a full suit of armour. The example offered here was bought from a BBC prop sale and so is likely to have seen some screen time in a costume drama or two. Or perhaps a set of three carved wood armorial figures of a lion, a unicorn and a dragon are more your taste. And there’s plenty of replica shields, swords and other features to choose from. 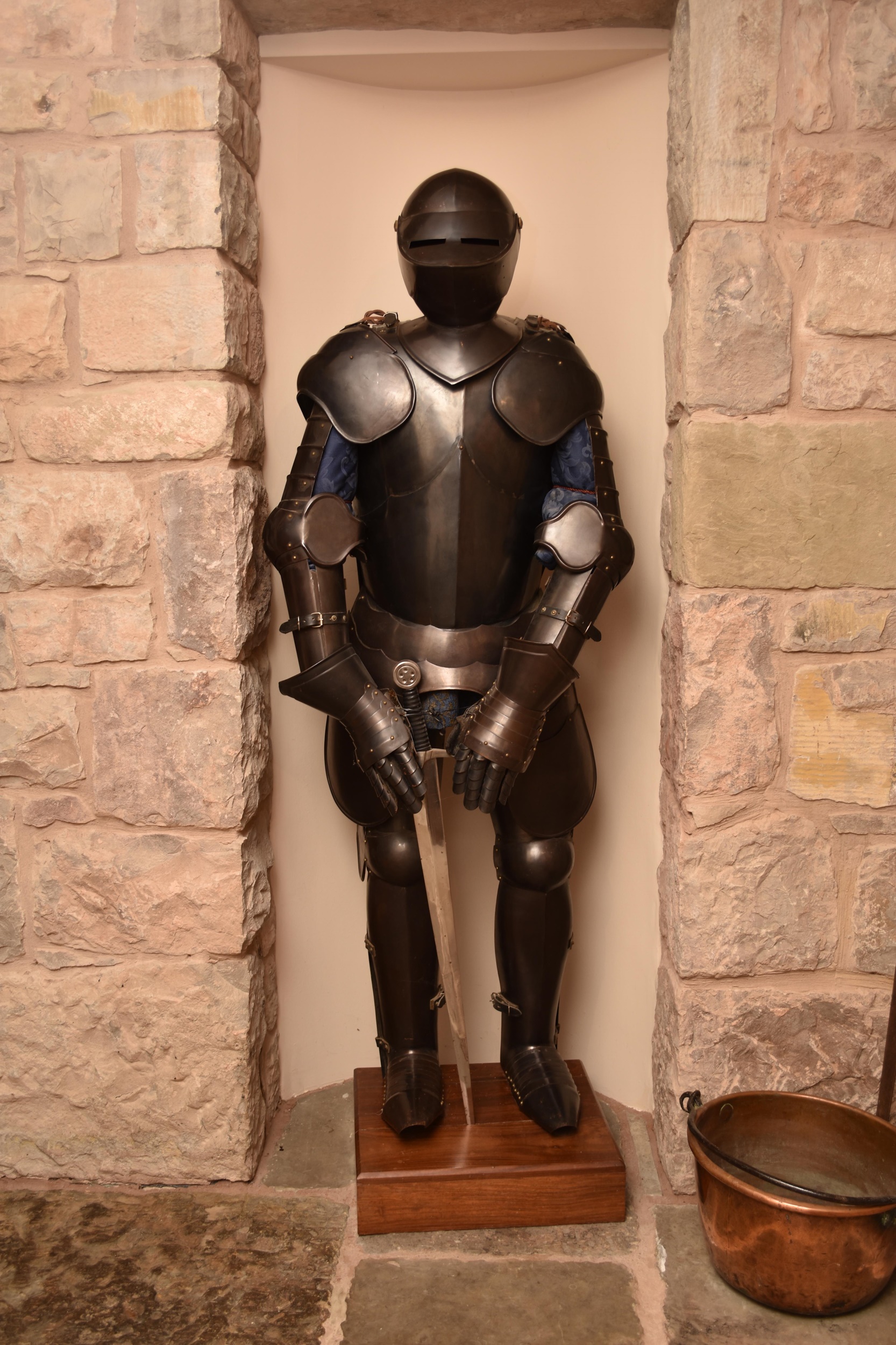 A reproduction full suit of armour, once the property of the BBC costume department