Table box belonging to Great Plague doctor to be sold at Auction.

A table box which reputedly once belonged to English physician Nathaniel Hodges, famous for his work during the Great Plague of London, is to be sold at Halls’ Fine Auction later this month. 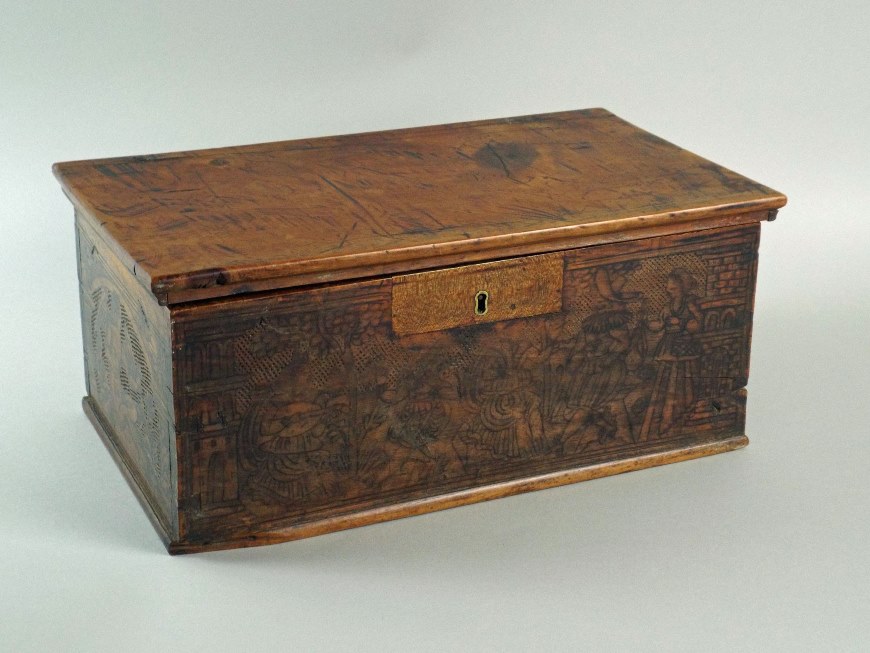 A table box which reputedly once belonged to English physician Nathaniel Hodges, famous for his work during the Great Plague of London, is to be sold at Halls’ Fine Auction later this month.

The 17th century cedar and penwork box, which is valued at up to £2,000, has been consigned to fine art auctioneers Halls’ auction of fine furniture, European ceramics and works of art on April 15 by relative of Dr Hodges (1629-1688).

The son of Dr Thomas Hodges, vicar of Kensington, Hodges was born in 1629 and studied at Westminster School, Trinity College, Cambridge and Christ Church. Oxford, where he took part in the activities of Oxford Experimental Philosophy Club.

He developed his ideas and theories on the Plague whilst it happened, as he resided in London throughout the disease’s lifespan. He compiled his findings in a detailed book “A Historical Account of the Plague in London in 1665’, which detailed symptoms and possible cures and remedies.

Crowds of patients were always waiting to be treated by him and he often didn’t return home until after 8pm. Twice during the epidemic, he is said to have felt as if the plague had infected him, but he escaped without serious illness.

In recognition of his services to the citizens during the plague, the city authorities granted him a stipend as their authorised physician. The College of Physicians elected him a fellow in 1672, he became censor in 1682 and delivered the Harveian oration the following year.

In 1666, he published an attack on quacks, ’An Apology for the Profession and Professors of Physic.’ Sadly, his medical practice did not continue to prosper and he was jailed in Ludgate Prison for debt and died there on June 10, 1688.

For more information about the table box or other lots in the auction, contact Halls on Tel: 01743 450700 or to view the catalogue online click here.