...Gifts us all a new and beautiful natural landscape, blowing away the cobwebs and dust from the winter months.

Flowers and trees will be blossoming and soon the fields will be filled with leaping lambs. Flora and fauna epitomises the spring months and the inspiration the natural world provides can often be seen in the world of jewellery and silver.

For hundreds of years, flowers and animals have been fashioned out of precious metals and stones to be worn or admired, and within our first jewellery and silver auction of the year we have a host of objects which demonstrate this custom.

Perhaps the most striking is a 19th century gem set snake necklace. Today, many people tend to have a fear of snakes, however in Victorian England, they represented eternal love and were often used in sentimental jewellery. Not only this, snakes, with their sinuous form, lent themselves perfectly to necklace, bracelet and ring designs that were especially popular throughout the 1840’s and 50’s which is when our piece dates from. This prime example is fashioned out of bright yellow gold links which are fully articulated to best emulate the ‘slithering’ movement and flow of a serpent’s body. The vivid hue provided by the gemstone turquoise was frequently used, as seen here mounted to the snakes head, not only as a bold statement but also to mimic the natural spectrum of colours seen in reptiles. Diamond accents and ruby set eyes complete this stunning creation. Presented within its original box, a work of art in itself, it bears an estimate of £3000-5000.

As the 19th century continued and through to the first part of the 20th century, simple bar brooches, which could be mounted with a countless array of individual designs, became increasingly popular. Animals were the perfect subject matter to present on the bars, where they could sit proudly on the wearer. A partridge, pearl set owl and a terrier are all displayed in the auction.

The use of animal motifs in silversmithing is also prolific. Snakes are often cast as handles on trophy cups or mugs and animal masks, such as rams and lions are used for additional embellishments on works of art such as candlesticks and table centrepieces. Items of silver are also often raised on stylised paw or hoof feet.

The use of flowers in silver design is also abundant. The art of repousse, which involves an object being struck form the reverse causing a raised decoration to the front, is often used to create floral patterns on objects such as teapots, trays, vases and boxes. It was particularly popular throughout the late 19th century, with floral designs often enveloping the body it was decorating. A small silver scent bottle, dated 1893, offered into our March auction, marries both the flora and fauna theme perfectly, with a decorative body showcasing an embossed bird within scroll and flower surround.

Floral inspired jewellery first became popular in the 17th century and its appeal has continued almost uninterrupted to the present day. Perhaps, this is due to not only the natural decorative nature of flowers but also their ability to convey meaning and sentiment. Large diamond floral sprays were favoured throughout the 18th and 19th centuries, with diamonds and coloured stones used to create opulent statement brooches, necklaces and tiaras. The move into the 20th century saw a change in fashion from large, almost ostentatious designs, to more delicate shapes and motifs. As we moved into the second half of the 20th century though, large statement pieces came back into fashion, gaining particular popularity in the 1970’s. 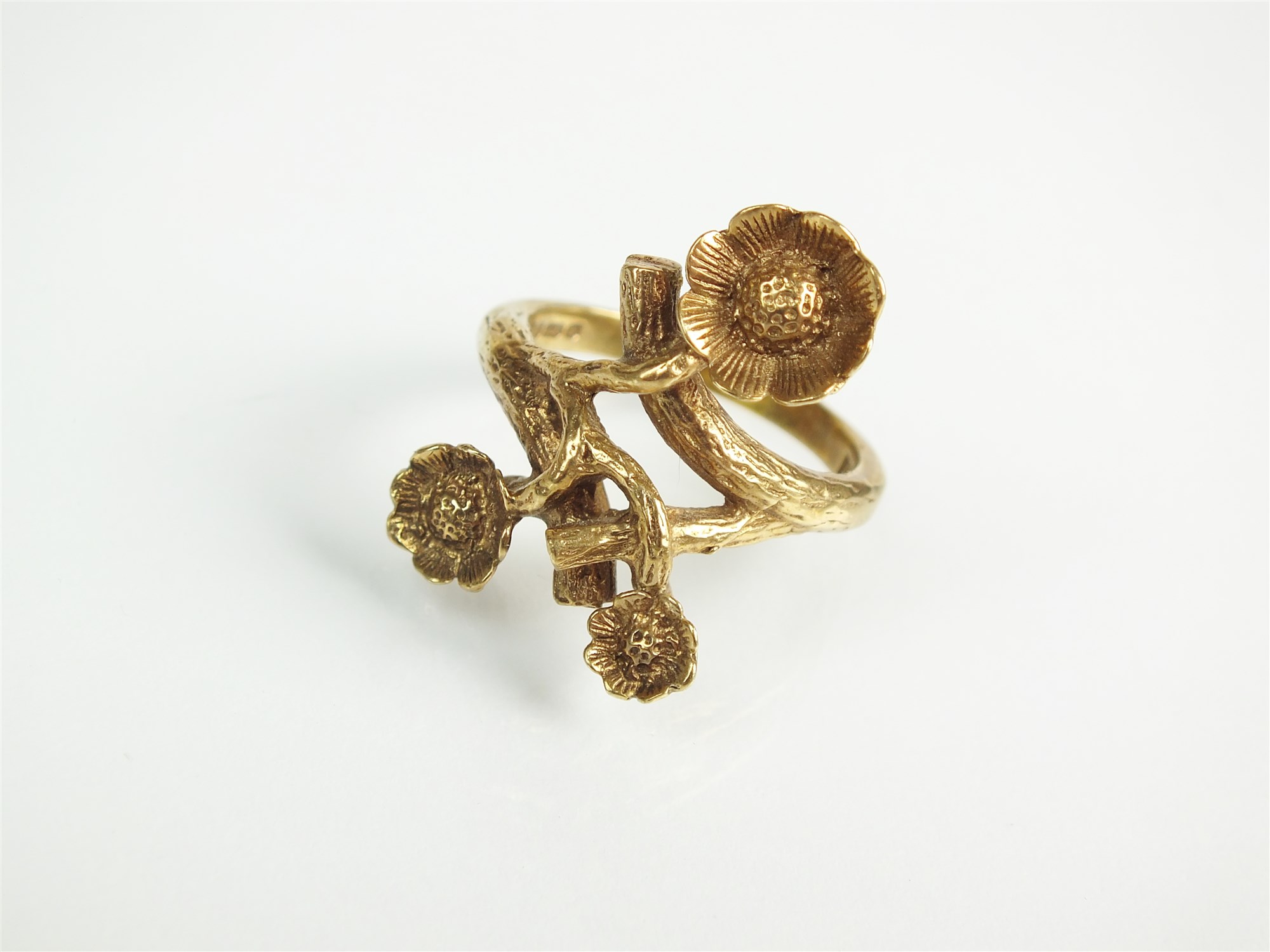 Over hundreds (if not thousands), of years, artists and designers have taken inspiration from the natural world that surrounds us. The new life spring brings will also bring with it new ideas and brand new creations which will become antiques of the future.