Sorting the Dogs from the Lions

Dogs and lions appear often in Chinese mythology and culture, which means they also enjoy plenty of attention from the applied arts 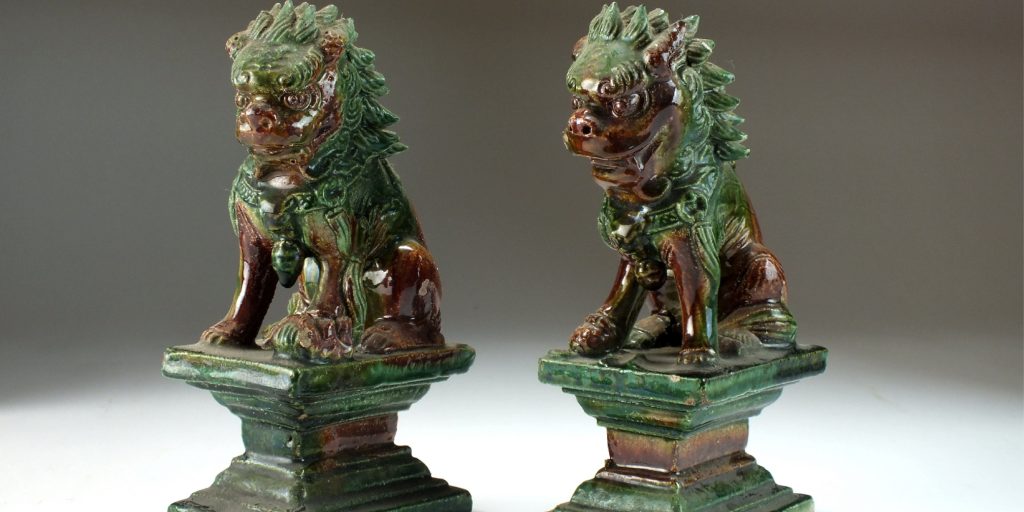 Dogs and lions appear often in Chinese mythology and culture, which means they also enjoy plenty of attention from the applied arts. In addition to turning up in paintings and prints, these creatures are found in pottery, porcelain, jade, bronze, wood, ivory and other materials. To Western eyes they all look very similar; seated or standing, snarling furiously and generally looking rather formidable, sometimes resting a front paw on a ball. But are you looking at a dog or a lion or a dragon or something else entirely? Here’s my guide to identifying these beasts and what significance they have.

These are frequently and confusingly referred to as dogs, lion-dogs, Fo dogs (or Fu dogs). They come in pairs, a male and female, and stand as guardians of house and home. Traditionally the female lion protects the inside of a home while the male protects the building itself. Telling them apart, the male lion rests a front paw on an embroidered ball while the female rests her paw on a playful cub. The principles of Feng Shui indicate they should be positioned with the female on the left and the male on the right as you face them and together they represent the opposing forces of yin and yang. The term ‘Fo’, ‘Foo’ or ‘Fu’ Dog is predominantly a Western invention and is derived from the Chinese word ‘Fu’ meaning blessing, fortune or prosperity. ‘Fo’ also refers to Buddha who was traditionally protected by a lion.

A Qilin, also known as a Kylin or Kirin, is a sort of chimera; a hybrid made up of part horse or deer and part dragon. They can usually be distinguished by having longer horse-type body and legs, horns or antlers, a curly mane of hair on their necks and a tail of flame-like plumage.

Another hybrid like the Qilin, a Pixiu is a winged lion. This strong protector beast is associated with wealth and fortune, given that it eats nothing but silver, gold and jewels. Like guardian lions, Pixiu are sometimes depicted as male and female, distinguished by a set of antlers: Female Pixiu, known as Bixie, have two antlers while the male, Tianlu, has one antler.

This is another term for a guardian lion or fu dog, derived from the Chinese ‘stone lion’. The word ‘Shi’ meaning ‘lion’ might give us a clue as to why we in the West refer to Chinese lions as dogs. Certain breeds of Chinese dog are named after lions such as the Shi-tzu which, literally translated, means ‘lion dog’.

For any advice or information on your Asian art or collection contact our specialist Alexander on 01743 450 700 or email alexander@hallsgb.com