A slice of British Second World War aviation history, in the form of a fascinating group of items that originally belonged to a pilot who flew 19 different aircraft, sold for nearly £2,000 at a Shropshire fine art auction house on Wednesday 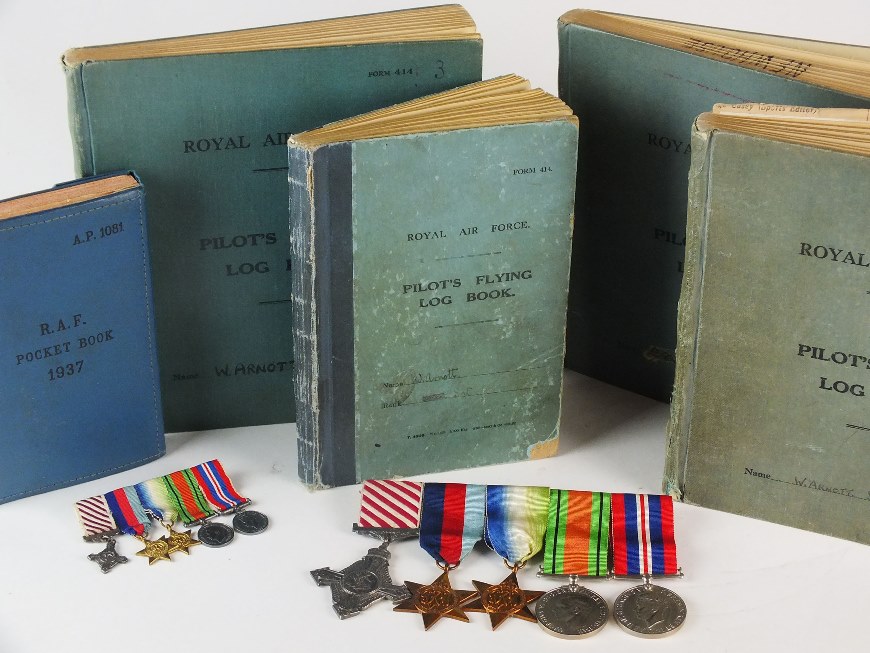 A slice of British Second World War aviation history, in the form of a fascinating group of items that originally belonged to a pilot who flew 19 different aircraft, sold for nearly £2,000 at a Shropshire fine art auction house on Wednesday.

The fascinating collection, which originally belonged to Pilot Officer W. Arnott, who flew planes for the Royal Air Force during the Second World War, was consigned to Halls’ militaria auction at the company’s Battlefield salerooms in Shrewsbury.

The group, which sold for £1,950, contained five medals, which included the Air Force Cross – one of only just over 2,000 awarded during this period – his set of miniature dress medals, four flying log books and his original brown leather flying helmet with goggles.

Caroline Dennard, Halls’ militaria specialist, described the collection, which was discovered at the company’s regular Monday morning free valuation clinic in Shrewsbury, as “almost the Holy Grail for collectors”.

After delving into the log books, which covered the periods from 1936 right through to 1948, she discovered that Pilot Officer Arnott had almost 4,800 documented flying hours and experience in flying a total of 19 different aircraft.

From 1940-’42, he was stationed at Woodley, Berkshire and was later twice stationed at Shawbury in a career which went on until his retirement in 1971.

“Having this documentation, alongside the physical awards he received for his actions during the war, offers a treasure trove of information and is invaluable to collectors,” she added. “It truly is a testament to him and his achievements that we were able to offer these medals for sale. By keeping the objects together it became an archive of both his life and service.”

Top selling lot at the auction was a rare collection of 50 photographs of captured and executed 19th century bandits in Southern Italy, which sold for £2,200 to an Italian Internet bidder.
The rather macabre Italian carte-de viste albumen photographs were taken by Raffaele del Pozzo in various poses of both capture and execution, each with annotation on the back, including names and dates. Photographer del Pozzo was born in 1828 in Gauro, which was home to a large number of bandits and brigands.

“Bands of brigands were formed mainly by former Garibaldi’s ‘Red Shirts’, former soldiers of the Bourbon army, farm-labourers, waged peasants, who lived in utter poverty, and also by their women, who were as valiant as the men,” explained Miss Dennard.
“They were groups of outlaws who gathered in an area around a leader and attacked people and property. They became thieves, murderers, criminals and saw armed revolution as the only way to gain political rights and fight poverty.
“For the first time in the 1860s and ‘70s, photography was being used as a tool of mass communication. Italian leaders, such as La Marmora and General Pallavicini, understood that these bands of raiders in Southern Italy could threaten to undermine the unification process.
Photographers, like del Pozzo, were recruited and used as a means to generate negative images of these robbers. They would be called to scenes of clashes or battles after the bandits had been either executed and captured, and asked to take photographs. The hope was to break the ongoing myth that these robbers were uncatchable.”
Another interesting lot was an essay by Captain Horace Hood, commander of H.MS Hyacinth on April 21, 1904, dated Sunday, May 3, ’04, detailing the destruction of Fort Illig and the battle against the Illig Dervishes of Somaliland.

Written on four sides, the pages included two small sketches of relevant positions during the battle and eclipsed their estimate to sell for £580.

Rear Admiral Sir Horace Lambert Alexander Hood was a British Royal Navy admiral of the First World War, whose lengthy and distinguished service saw him engaged in operations around the world, frequently participating in land campaigns as part of a shore brigade.

His death, at the age of 45, at the Battle of Jutland in the destruction of his flagship HMS Invincible on May 31, 1916 was met with mourning and accolades from across Britain.

In July 1903, he was promoted to full captain and placed in command of HMS Hyacinth, flagship of Admiral G. L. Atkinson-Willes on the East Indies Station. In April, 1904, Hood was given his first independent command as he led a force of 754 sailors, marines and soldiers of the Hampshire Regiment against the Ilig Dervishes of Somaliland.

Landing his men on an opposed beach in the dark, Hood led from the front, personally engaging in hand-to-hand combat and driving the dervishes into the hinterland, for which he was awarded the Distinguished Service Order, and it is in this essay that he gives his own personal account of the action.