Shrewsbury auction house is a magnet for amber bead necklaces 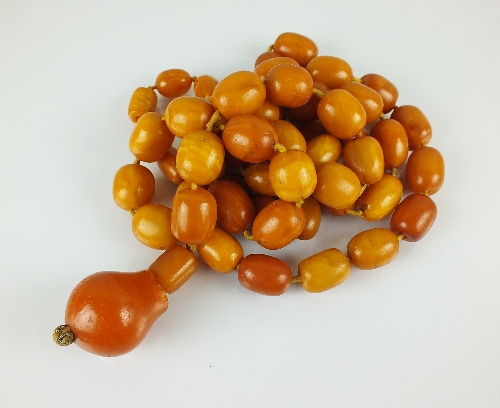 Take Wednesday’s £250,000 fine paintings, silver, jewellery and watches at Halls’ Battlefield salerooms in Shrewsbury for example, which had 26 amber necklaces and a bangle on offer from vendors across the UK.

All but three of the necklaces on offer sold for a combined sum of £41,500 to internet and telephone bidders, with prices ranging from £10,000 to £220. Top price went to a necklace comprising 59 graduated opaque-translucent butterscotch oval amber beads with a large, circular baluster pendant drop.

Another necklace with 28 oval butterscotch amber beads sold for £9,000.

The striking front cover lot on the auction catalogue, a rare archaeological revival gold Pharaoh brooch within its original box, made by noted 19th century London goldsmith John Brogden, sold for £4,200 to a London buyer who held off a rival bidder from America.

The brooch, naturalistically modelled Pharaoh’s head bearing a textured nemes with raised hieroglyph decoration, was consigned by an Australian couple. Brogden exhibited jewellery at the 1851 Great Exhibition and won various awards at exhibitions in Paris and London from the 1850s-‘70s.

Other leading prices in the jewellery section included £3,000 for a pear shaped solitaire diamond ring, £2,300 for a two stone diamond cross over ring, £2,200 for a Faberge enamelled egg pendant and £2,000 each for an Art Deco style diamond set cluster ring and late 19th century diamond and enamel bracelet.

Star of the silver section were an eye-catching Walker and Hall Victorian silver centrepiece, originally part of The Leverhulme Collection. Which sold for £2,900. The centrepiece was presented to William Hesketh Lever by Birkenhead Liberals after fighting but losing the General Election in 1892.

Other excellent results included a tortoiseshell and silver mounted tea caddy, hallmarked Martin, Hall and Co, 1890, at £1,100, an 18th century silver mounted coconut cup and cover by Ebenezer Coker at £1,000, a comprehensive canteen of silver plated cutlery at £950, an Edwardian silver butt marker case with ivory pegs at £800 and a novelty silver vinaigrette in the form of a walnut, which made a cracking £540.

Maryanne Lineker-Mobberley, head of Halls’ silver and jewellery department, said: “We are attracting so many necklaces because Halls has built a reputation for achieving some of the best regional results in the UK for selling amber.

“Amber is still selling well and we already have another necklace, valued at up to £3,500, consigned for our March auction. Butterscotch amber, which has a milky, less translucent appearance, is now very much in vogue, having captured the eye in Asia and the Middle East.

“This auction proves that having a collection to amber necklaces attracts international buyers and sells well”.