Set of ‘Braaq’ paintings sells for £12,500 at Shrewsbury auction

A set of four oil paintings by popular modern British artist Brian Shields attracted interest from art collectors across the UK as they sold for £12,500 at auction in Shropshire on Wednesday. 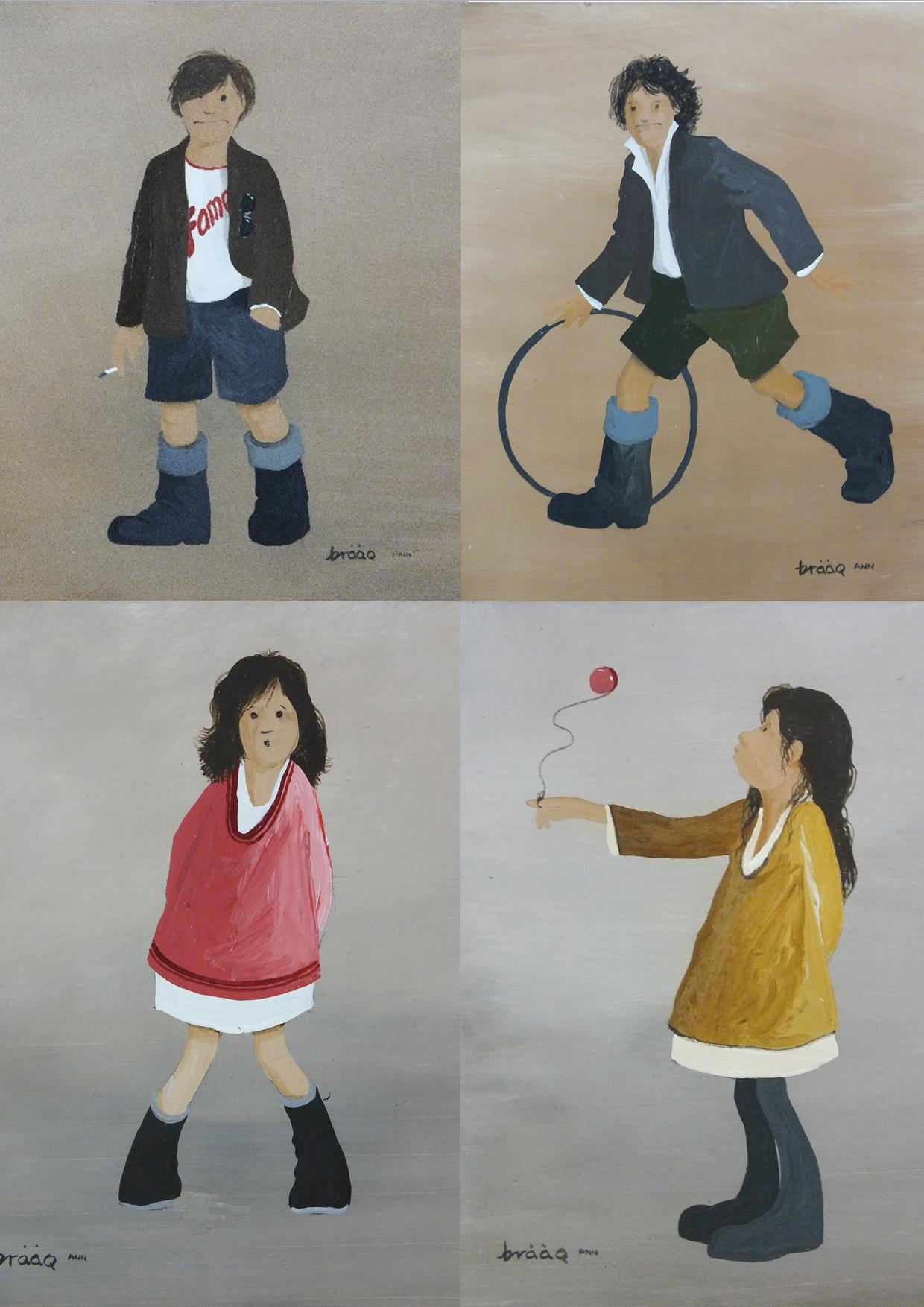 A set of four oil paintings by popular modern British artist Brian Shields attracted interest from art collectors across the UK as they sold for £12,500 at auction in Shropshire on Wednesday.

The small paintings by the artist, nicknamed ‘Braaq’, were consigned by a South East England collector to Halls’ £250,000 fine pictures, silver and jewellery auction at the Battlefield salerooms in Shrewsbury where they doubled their pre-sale estimate.

Allan Darwell, head of the paintings department at Halls, believes two of the paintings may be of Brian Shields (1951-‘97) and his sister, Ann, as children. The paintings depict a young boy with a hoop wearing wellington boots, possibly the artist, a young boy smoking a cigarette wearing a ‘Fame’ teeshirt and wellington boots, a young girl playing with a small balloon, possibly the artist’s sister and a young girl wearing a pink jumper. They are all signed ‘Braaq’ and inscribed ‘Ann’.

Born in Liverpool, Shields is renowned for producing industrial scenes of Northern life, which has led to his being referred to as the “Liverpool Lowry”. He acquired the nickname ‘Braaq’ in his school days, on account of his artistic talent after the French painter Georges Braque.

In the late 1970s tragedy struck when his sister, Ann, died at the age of 20 and many of his subsequent paintings were not only signed but inscribed ‘Ann’ in her memory.

Shields is also renowned for painting himself into many of his pictures, wearing wellies and invariably a black and white striped cotton jumper, apparently the jumper was the only “new” item of clothing he ever remembered receiving as a young boy.

“Although successful he was often faced with financial difficulties and was declared bankrupt towards the end of his career,” said Mr Darwell. “He sadly died of a brain haemorrhage at the age of 46 and his works are now extremely popular. "I am delighted that the set of four of his paintings sold so well in our auction and hopefully we can attract more of his work for auction in the new year.”

Works by popular contemporary artists, including Jonathan Armigel Wade and Sir Terry Frost, were sold alongside oils and watercolours by Benjamin Williams Leader, Eugene Galien-Laloue and other famous names from the Victorian era. A summer river landscape, possibly the River Lledr in North Wales, by Leader (1831-1923), attracted keen competition before selling for £8,200 while a watercolour of a Parisian street scene by influential French artist Galien-Laloue (1854-1941) found a new home for £7,000.

A pair of watercolours of ‘Constantinople’ attributed to Antoine Ignace Melling (1763-1831) proved the surprise of the auction as they eclipsed their estimate to sell for £6,500.

Great pre-sale interest was converted to competitive bidding as a recent work by contemporary artist Jonathan Armigel Wade, titled ‘After the shooting lunch’, which appealed to shooting enthusiasts, sold for £3,000.

Two oil paintings sold for £2,700 – ‘The Battle for Trafalgar’ by an artist in the circle of William Evans Dutton Stuart (1826-’73) and a white peacock and other birds in a classical garden by an artist from the school of Melchior D’Hondecoeter (1636-’95).

Halls’ fine art director, Jeremy Lamond, said he was delighted with the results achieved in all sections of the auction. “Quality items sold well and achieving five figure results in the jewellery and picture sections shows the strength of the market,” he added.