The sale of a yellow Rolls Royce Silver Spur, purchased by late extrovert millionaire publisher Felix Dennis to celebrate making his first million, sold for £15,500 as the curtain fell on a memorable three-day auction of his diverse collection last night 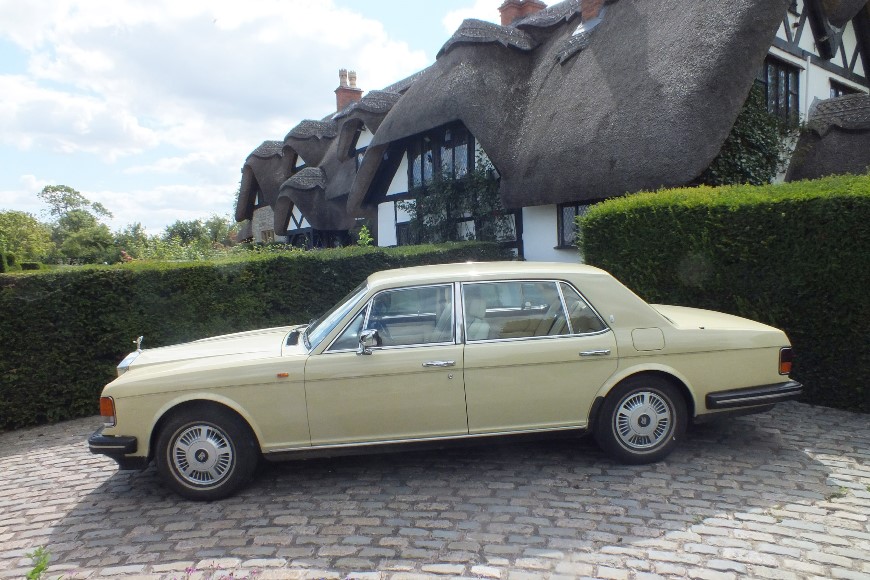 The sale of a yellow Rolls Royce Silver Spur, purchased by late extrovert millionaire publisher Felix Dennis to celebrate making his first million, sold for £15,500 as the curtain fell on a memorable three-day auction of his diverse collection last night (Thursday).

The 7,650cc luxury car, which had the personalised registration number 9999 FD, claimed the second highest price on the final day of the successful auction held on Dennis’ estate in Dorsington, near Stratford upon Avon. First registered in 1987, the Rolls Royce had travelled 219,400 miles.

Top seller was a 20th century garden water feature entitled ‘Dark Planet’, which sold for £15,750, while wines and spirits peaked at £1,400 for a bottle of 1988 Montrachet Leroy Domaine de la Romanee-Conti.

Possessions from the 12 homes around the world owned by Dennis, publisher, planter of trees, poet and entrepreneur, were assembled in a 20,000 square foot marquee for the 2,300 lot auction conducted jointly by Halls of Shrewsbury and Bigwood Fine Art Auctioneers of Stratford-upon-Avon.

The proceeds will go to Dennis’ estate and the major beneficiary is The Heart of England Forest Charity. In 1989, Dennis had a vision to create a 30,000 acre contiguous forest in the heart of England, from the ancient Forest of Arden to the Vale of Evesham. The one millionth tree was planted around two years ago.

The final day of the auction featured a diverse collection of lots, which reflected the millionaire’s colourful life. Cannons and weapons, garden statuary, gym equipment, Segways, musical instruments and equipment, fine wines and spirits, Bonsai trees, ceramics, glass and hats were snapped up by enthusiastic bidders both in the marquee, on the Internet and on telephone lines.

Cannons and weapons achieved some of the day’s highest prices with a pair of George III English bronze barrelled examples blasting to £11,800 and a pair of early 19th century 5.5 inch bronze mortars on carriages shooting to £7,500 and a late 18th or early 19th century iron cannon on a naval gun carriage selling for £5,000.

Garden statuary produced an excellent series of results with a Desmond Fountain (born 1946) life size partial bronze of a girl seated upon a chair making £5,000 while his bronze sculpture of entitled ‘Ashley’, depicting a girl seated on the arm of a garden bench, sold for £3,700.

In the same section, a 20th century stone garden arbour in the form of a classical temple and a pair of 19th century bronze recumbent lions made £4,500 each and a 20 century single span arched bridge sold for £3,500.

Animals sculptures were prominent in the collection with a pair of 20th century bronze cranes making £3,300 and a pair of stone lions making £2,000.

In the musical equipment section, a set of four limited edition canvas prints after Sebastian Kruger, depicting caricatures of The Rolling Stones, attracted competitive bidding up to £3,500, while a ‘Rock-ola’ jukebox hit the right note at £2,600 and Dennis’ drum kit found a new home for £1,100.

Collectables included a distressed leather two-piece suite and a John Nethercott light oak dining suite at £2,500 each and a Pierre Diamantopoulo bronzed steel sculpture of a running mad March hare at £1,900.

Pick of the porcelain and ceramics were £2,000 for an exhibition piece Moorcroft vase, £1,100 for a Lyn Chase Designs part tea and dinner service and £1,000 for a late 20th century Nick Mackman Raku-fired warthog.

David Bliss, manager of Dennis’ estate and an executor, said the proceeds of the auction would continue his former employer’s legacy.

Dennis’ mission to plant 300 acres a year with 120,000 oak trees continues under the leadership of Mr Bliss, who heads The Heart of England Forest Charity, which is planting five per cent of all the trees planted in the UK.

“I was lucky enough to have Felix around to know how he wanted to create the forest,” he added. “We buy farms and slowly convert the Grade 3 agricultural land to woodland. I’m passionate about his legacy and it’s such an exciting project creating a forest in the Heart of England.”