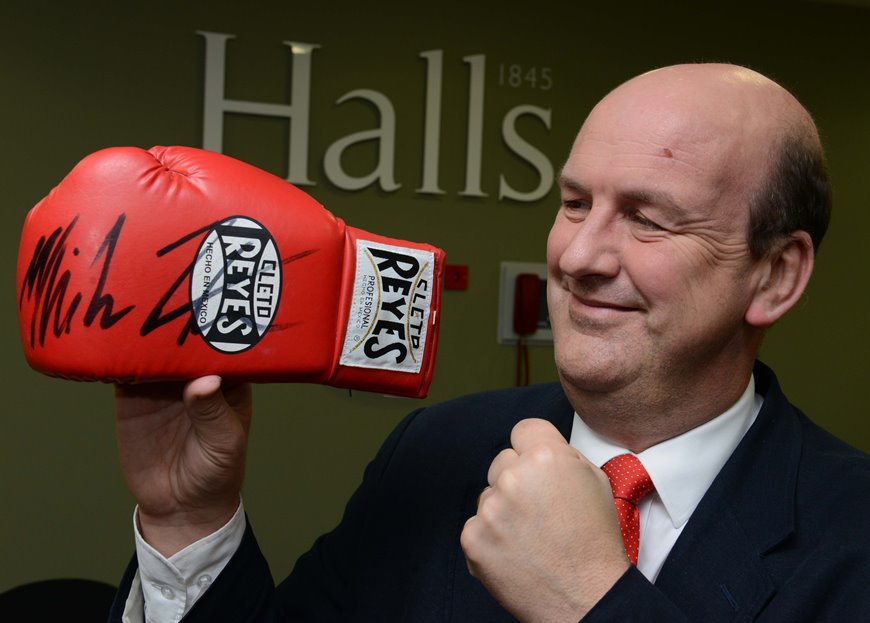 A signed Mike Tyson boxing glove belonging to Shropshire’s former world super-middleweight champion RichieWoodhall went under the hammer for £120 this morning at Halls last Interiors Auction of 2015. What a great end to a fantastic year for Halls Fine Art!

The money will go to the Lingen Davies Cancer Fund and is the first item in the sale of sporting memorabilia owned by Mr Woodhall.

It was sold at our Interiors auction today at our saleroom in Bowmen Way in Battlefield on the outskirts of Shrewsbury this morning.

The glove is the first of several items from Mr Woodhall’s boxing memorabilia collection that will go under the hammer over the coming months.

Mr Woodhall, of Lightmoor in Telford, will sell several more items from his collection at future auctions.

They include a 6ft 6in vinyl roller blind poster signed by WBC International and Commonwealth heavyweight champion Anthony Joshua, and a print of a fight between Joe Calzaghe and Jeff Lacy, which has been signed by Calzaghe.

A poster for last year’s second fight between Karl Froch and George Groves, which has been signed by Froch, will also be going under the hammer.

A print of the semi-final at the 1988 Seoul Olympics, between Richie and Roy Jones Junior, which has been signed by both fighters, will also be up for grabs, as well as a glove signed by former world middleweight champion Jake LaMotta.

A glove signed by Roberto ‘Hands of Stone’ Duran and a pair of gloves signed by Thomas ‘The Hitman’ Hearns and his trainer Emanuel Steward will also be auctioned.