Rare silver porringer one of the stars of £200,000 auction

Rare silver porringer one of the stars of £200,000 auction 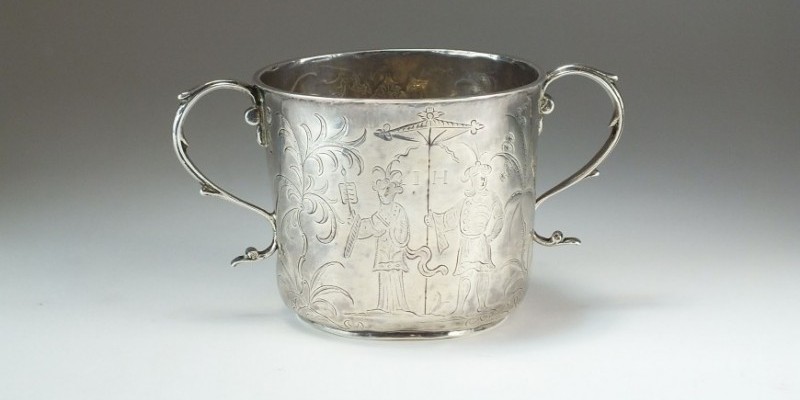 A rare 17th century provincial silver porringer, or silver bowl, sold for £6,000 when it went under the hammer this week.

A previously unrecorded piece made by Chester silversmith Ralph Walley (1661-1703), the porringer was decorated with chinoiserie figures typical of the Charles II period and was consigned to Halls’ £200,000 silver, jewellery and pictures auction in Shrewsbury. The buyer was a Cheshire collector.

Maryanne Lineker-Mobberley, head of Halls’ silver and jewellery department, said the maker’s mark suggested that the porringer was made before 1685 by Walley, a Freeman of Chester.

“The porringer, which originally would have been used for porridge, gruel or pottage, was entered in the auction by a brother and sister from North Shropshire whose family has Cheshire links,” she explained.

“Their father bought the porringer more than 50 years ago in a job lot of silver at a provincial auction house not knowing its true value. Following his death, his widow took it to a silver specialist who was very enthusiastic about it. There are only nine previously recorded pieces made by Walley in the era.”

Heading up the pictures section were three oil paintings. A work titled ‘A candlelit embrace’ by Petrus Van Schendel (1806-1870) sold for £6,000 and a striking work attributed to Pieter Dubordieu (1607-1678) of a seated gentleman wearing a large white ruff sold for £5,000.

A watercolour portrait by George Richmond of famous Shropshire soldier Lord Rowland Hill is returning to the family’s ownership after being purchased for £2,500. Lord Hill was one of the Duke of Wellington’s most trusted generals in the Battle of Waterloo and was nicknamed Daddy Hill for looking after the men under his command.

Born in 1772 near Weston-under-Redcastle, he joined the army in 1790 and went on to become one of Shropshire’s most distinguished soldiers, holding the post of Commander-in-chief of the Army from 1828 until his death in 1842. He served in France, Egypt and Germany before he distinguished himself during the Peninsular Campaign. A memorial to him stands near the Shirehall, Shrewsbury, known as Lord Hill’s Column, the tallest Doric column in the world.

There was virtually a 100 per cent sale rate in the coins section, where a Victoria Gold Jubilee 1887 specimen set sold for £2,000.

Maryanne Lineker-Mobberley said she was delighted by a series of excellent results in the silver, jewellery and watches sections. She was particularly pleased with the prices achieved for three pieces of 19th century opal jewellery, which included a hinged bangle at £1,900.

“They were three very nice pieces of early jewellery,” she added. “People like jewellery that has some age to it, is in good condition and the opals had a good play of colour.

“The watches did very well and it proves again that famous names, such as Rolex and Cartier, attract good prices.”

James Forster, head of Halls’ pictures department, said there were some notable highlights in the auction and he was delighted that the small collection of paintings by Edwardian artist Frank Moss Bennett had sold well.

“The auction demonstrated that pictures fresh from country houses with good provenance still sell well,” he added. “The portraits sold because they were quite informal and personal, which is what people liked about them.”