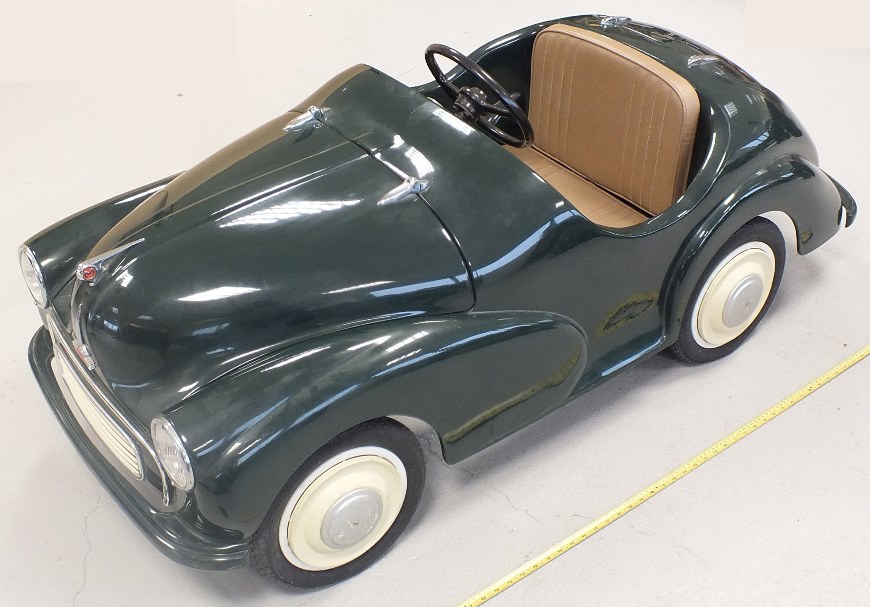 The pedal car, one of only 56 ever made in 1993 and in excellent condition, tripled its pre-sale estimate to sell for £3,600 to telephone bidder from Lancashire at fine art auctioneers Halls’ successful toys and collectibles auction in Shrewsbury.

Stewart Orr, Halls’ toys specialist, remembers the pedal car being launched at the Motor Show at Earls Court, London in 1993, as he was representing Matchbox on the next stand.

“It attracted a huge amount of interest at the show but never really took off because it was too expensive at £800. I hadn’t seen any sign of the car from that day until one arrived in Halls’ saleroom and I had often wondered what had happened to them. It was a bit of white elephant because it was too big to keep in the house.

“The price achieved at auction was way beyond our expectations and I think it’s a world record. One of the women who works for Halls actually bought a real one for less.”

Made by the Morris Minor Centre of Bath, it was modelled after the J-40 pressed steel pedal car manufactured by Nuffield Group in the 1950s. The updated version used lighter materials and was closely modelled on the Minor 1000 with treadle action pedals and opening boot and bonnet, which revealed a dummy engine and six volt battery to operate lights and horn.

Elsewhere in the saleroom, a rare 1937 Hornby ‘O’ gauge No 4 Eton Schools Class locomotive sold for £500, a group of three boxed Matchbox miniature army vehicles made £480, a 1920s Moko tinplate model of a light limousine made £360 and a 1933 Meccano constructor car made £340.

A quantity of dolls house furniture and accessories sold for £700 and two pre-war German dolls, including one by Kammer and Reinhart, made £270.

A first production run Corgi model of The Batmobile, complete with its original box, operating instructions and firing rockets, sold for £240. It was one of 15 Corgi lots consigned by a Shropshire collector, which sold for £1,600.
The collection included other collectable models such as the Man from Uncle car and the Green Hornet Black Beauty car which sold for £130 each.

Halls’ fine art director Jeremy Lamond was delighted with the sale result. “There was a high selling rate for toys, especially unusual and rare examples and we achieved some excellent prices, with a lot of bidding activity on the internet and in a full saleroom,” he said.

Halls’ next toys auction is on May 20 and Mr Orr is now accepting entries. Now seems to be the time to sell vintage toys and collectables!