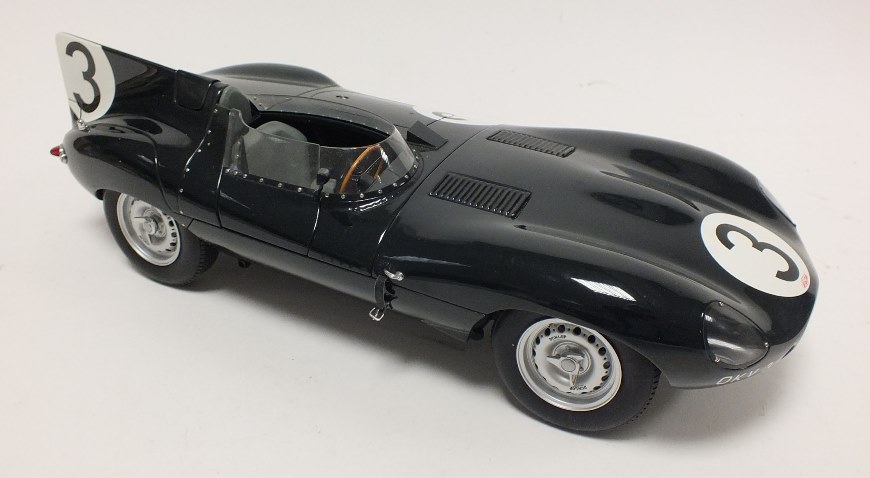 A rare and stunning scale model of the Jaguar D-Type racing car driven to victory in the famous 1954 Reims 12 Hour race by Ken Wharton and Peter Whitehead accelerated to £420 at a Shropshire auction yesterday (Wednesday).

Doubling its pre-sale estimate as selling to an internet bid by a North England collector, the high quality model was consigned by a Cheshire collector to Halls’ successful toys and collectibles auction at the Battlefield salerooms in Shrewsbury.

Halls’ toys specialist Stewart Orr was not surprised by the competitive bidding for the model, which he described as one of the best ever made and highly sought after by collectors.

The bulk of the auction was taken up by a collection of scale ‘N’ Gauge model trains, which sold for £4,700. Consigned by the widow of an avid model railway enthusiast from Shrewsbury, the collection comprised literally dozens of locomotives, carriages and rolling stock of all types.

“N Gauge is becoming very popular with modellers because its small size – a fully working locomotive is only five inches long – means that a realistic layout can be made within a small area and also that large numbers of coaches can be pulled along just as in real life,” explained Mr Orr.

“Recent advances in the gauge allow the use of microchips to produce sound, lights and steam as well as the ability to run two trains on the same track independently.”

The auction’s top selling lot was a British 1960s Sasha blonde doll with no philtrum – the groove in the middle area of the upper lip – which sold for £1,200. Earlier this year, a similar Sasha doll sold for £1,250 at Halls.

Other notable lots include a little used 1922 Meccano set number 6A, which contained a number of rare parts and a beautiful set of Britain’s lead farm animals from the ‘Model Home Farm Series’, which sold for £270 each.

“Britain’s is best known for making toy soldiers but, due to the reaction against war-like military toys after the First World War, they decided to start making more pastoral subjects,” explained Mr Orr.

“The farm set that we had in the auction was extensive and even included a model of the village idiot, which was reputedly added in response to a comment by Queen Mary when she visited the Britain’s stand at the 1927 British Industries Fair. She is claimed to have said ‘Britain’s farm set had everything but the village idiot!’.”

Other leading prices were £320 for two Minichamps models of Bentleys – a ‘Blue Train Special’ and an L model Le Mans 1930 – £250 for a Wilesco steam engine mounted on a display board and £230 for a 1910 tinplate clockwork carousel attributed to Hoch and Beckmann.

Already consigned to the company’s next toys auction on January 28 is a 1932 tinplate saloon car by German company Tippco, which was presented to the elderly owner for his Sunday School attendance and is valued at up to £500.

Also consigned is a collection of 160 Corgi lorries in the livery of British haulage companies. Mr Orr appealed is now accepting entries for the auction and can be contacted on Tel: 01743 450700