Rare Chinese Horses Have An Unlikely Connection To The Big Screen 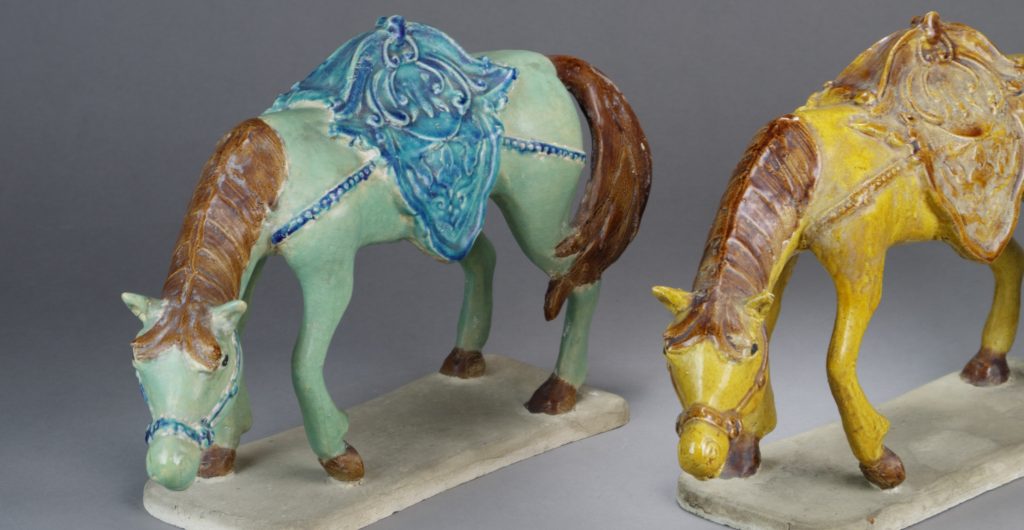 Halls Fine Art has been instructed to sell a pair of Chinese stoneware horses that have a unique story. Halls Auctioneers in Shrewsbury are offering the late Qing Dynasty horses with an estimate of £2,500-£3,500, a price that is not only justified by their provenance but by a famous connection.  Auctioneer and Asian Art specialist at Halls, Alexander Clement, says ‘These figures are of exquisite quality and to have such a heartwarming story associated with them only makes them more desirable.’

John O’Gorman (1911-1977) was a British makeup artist for the motion picture industry, a career which began in 1947 with Mine Own Executioner starring Dulcie Gray. Among no fewer than 69 film credits O’Gorman worked on the first James Bond picture Dr. No (1962) with Ursula Andress as well as Charade (1963) with Audrey Hepburn, There’s a Girl in my Soup (1970) with Peter Sellers, the Beatles vehicle A Hard Day’s Night (1964) and The Yellow Rolls-Royce (1964) with Ingrid Bergman. Such did his reputation become as an expert in his field that actresses like Ingrid Bergman, Ursula Andress and Raquel Welch specifically requested him to do their makeup on shoots.

It was during the filming of The Yellow Rolls Royce with Ingrid Bergman on location in Rome that O’Gorman spotted a pair of Chinese glazed stoneware horses in an antique shop. Though he admired them greatly they were just beyond his means. He mentioned them in passing to Bergman while continuing to work but thought no more about them until the shoot wrapped and everyone was leaving. Ingrid Bergman took O’Gorman to one side and said that there was a crate waiting for him with a present inside. On opening the crate he was delighted to discover the Chinese horses he had so wanted.

The horses remained in the family and were passed down to his son and daughter on his death in 1977. Reunited for this auction, Halls is pleased to offer the O’Gorman-Bergman horses as lot 71 in its Asian Art sale on April 25th.

If you would like further information on this lot please call 01743 450 700 or email Alexander Clement alexander@hallsgb.com