Rare Beswick figure of Duchess has flower power at auction. 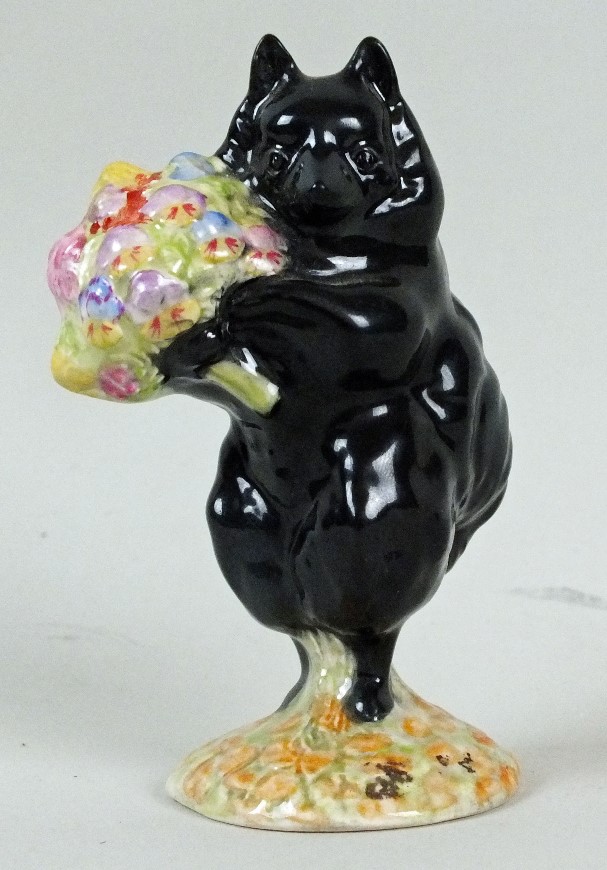 Standing at 10cms high, Duchess with Flowers, modelled by Graham Orwell as a black dog holding a bunch of multi-coloured flowers, was consigned by an Aberystwyth vendor to Halls’ collectable ceramics and interiors auction in Shrewsbury where it was secured by a telephone bid after keen online bidding.

“Most of the Beswick Beatrix Potter figurines were in pastel shades and then along came Duchess in jet black,” said Caroline Dennard, Halls’ European ceramics specialist. “She was produced for a very short period because she proved fairly unpopular, but subsequently she has become popular with collectors.”

The first part of a huge collection of Royal Doulton ‘Winnie the Pooh Storybook Collection’ figures, which extended to more than 150 pieces, sold to buyers from as far away as New Zealand.

A Shelley Art Deco Mode design tea service from 1930-’31 sold above estimate for £500. Miss Dennard said buyers liked the shape of the Mode design and this particular tea service was rare as it didn’t match the Shelley pattern book.

Other leading prices were £420 each for a Coalport cabaret set from 1875-’81 and a rare and early W. H. Goss figure titled ‘The Crossing Sweeper’, £315 for a complete set of 11 Beswick/Royal Doulton Alice in Wonderland Series figures, £300 for a seven pieces of Clarice Cliff for Newport and Wilkinsons and £240 for a W. H. Goss model of Feathers Hotel, Ledbury.

Miss Dennard said the auction attracted collectable ceramics collectors from Lancashire and Cheshire and she estimated that 60 per cent of the lots sold for private buyers.

“The collectable ceramics market is buoyant because people now appear to be prepared to invest again in things that they like,” she added. “Animals figures and themed ceramics sold very well which bodes well for our next auction on August 26.”