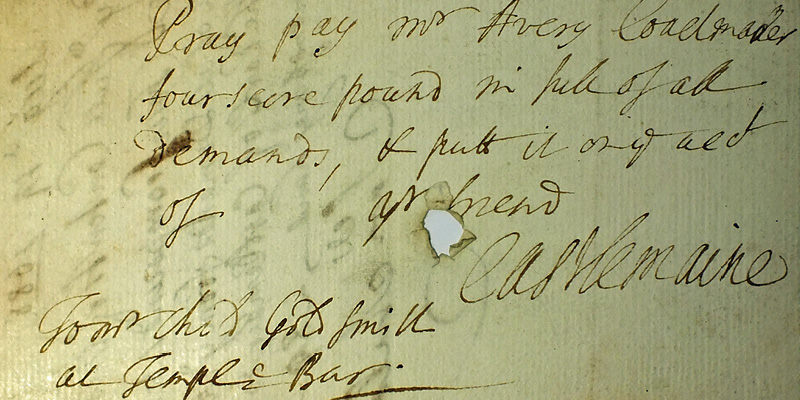 />Three 17th century cheques signed by Roger Palmer, 1st Earl of Castlemaine and the grandson of the 1st Lord Powis, are set to go up for auction next month.

Roger (1634–1705) was married to Barbara Villiers, Duchess of Cleveland, who was famously a mistress of Charles II and mothered five of the king’s children.

After separating from his wife in 1662, Roger travelled in France and Italy. By 1664, he was in the Levant, serving as an officer in the fleet of the Venetian Republic, commanded by Admiral Andrea Cornaro.

A portrait of him hangs in Powis Castle, a National Trust property in Welshpool and has been attributed to Venice’s leading portrait painter at the time, Sebastiano Bombelli.

Roger’s parents were Sir James Palmer and Catherine Hebert, daughter of the Earl of Powis. An English courtier, diplomat, politician who sat in the House of Commons and Catholic writer, Roger was educated at Eton College and King’s College, Cambridge.

He was elected MP for Windsor in 1660 and King Charles II made him Baron Limerick and Earl of Castlemaine in 1661, a humiliating title that was limited to his children by Barbara, which made it clear that the honour was for her services in the king’s bedchamber rather than his personal recognition. Roger didn’t want a peerage on these terms, but it was forced upon him and he never took his seat in the Irish House of Lord.

As a prominent Roman Catholic, he came under suspicion at the time of the Popish Plot between 1678-’81 and was committed to the Tower of London and subsequently tried for high treason, but was acquitted.

He became a member of the English Privy Council in 1686, following James II’s accession to the throne and was appointed Ambassador to the Vatican. After the Revolution of 1688, Roger took refuge in Llanfyllin, but was arrested in Oswestry and spent 16 months in the Tower until 1690 when he was freed on bail.

He was arrested and sent to the Tower again in 1696 after failing to attend the Irish Parliament but was released five months later. He died in Oswestry in 1705 at the age of 70 and was buried in the Herbert family vault at St Mary’s Church, Welshpool.

Derek Ainsworth, our coins specialist, described the cheques as interesting and rare, explaining that few examples had survived since the 17th century.

In the same auction, two 18th century French banknotes issued by Scottish economist John Law (1671-1729) will also be sold. The two Le Banque Royale notes are expected to sell for more than £200 each.

Born into a family of bankers and goldsmiths from Fife, he was imprisoned for killing a love rival in a sword duel in 1694 but escaped to Amsterdam. He went on to be appointed Controller General of Finances of France under the reign of Louis XV and in 1716 established the Banque Generale, the nation’s first central bank which collapsed in 1720.

Granted a pardon in 1719, Law returned to London for four years and then moved to Venice where he contracted pneumonia and died a poor man in 1729.

Also included in the auction is a set of eight 18th century banknotes prepared for but never issued by Stockholm Spinnhus, a female prison. The set is valued at in excess of £200.