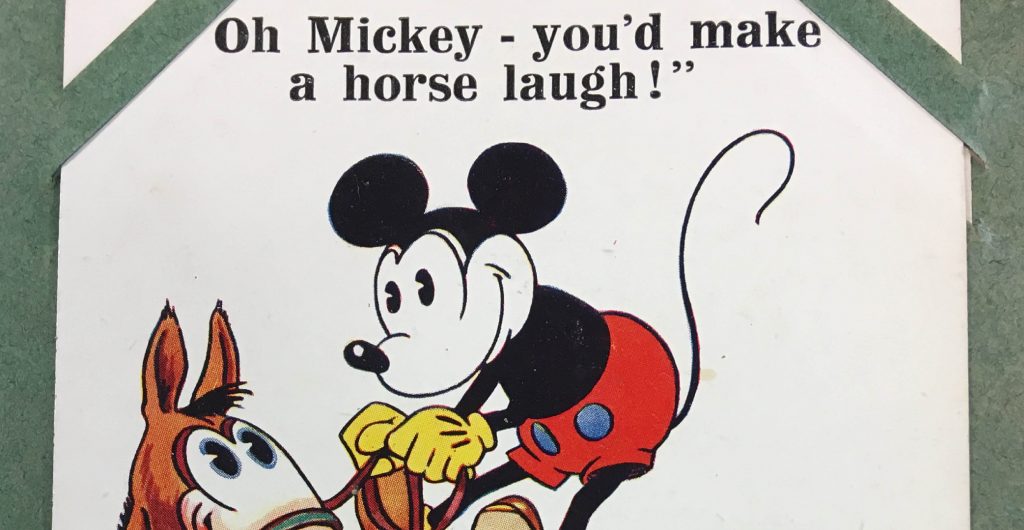 As Halls’ Postcard specialist Caroline Dennard is busy putting lots together for her next auction on 22nd November, we ask her about a particularly interesting collection that is set to create a buzz in the saleroom.

So Caroline, tell us about this fantastic collection that you are so excited about?

This is a broad archive of postcards, all consigned from private hands and which have, until now, often been cherished by the same family of the original collectors and compilers of the albums. Numbering over a 1000 postcards in total, the numerous albums represent what was, in the late 19th and early 20th century, the reliable mainstay form of communication between friends and family. The scope is huge, with cards ranging from humorous cartoons, to topographical, and even real photographic including famous accidents. Even the albums which they are contained in are works of art in themselves, demonstrating the artistic style of the Art Nouveau to the Art Deco.

Are there any cards that really stand out in the collection and why?

Being a nation of romantics at heart, the cards which appeal most to collectors are ones depicting scenes which we could not so easily find today. From early motoring history, to changing landscapes in towns and city centres, and even shots of people going about their daily lives all hold interest. Included within the postcard collection are a large number of early 20th century theatre related cards. Documenting a bygone era of classic glitz and glamour almost unheard of in today’s society, many cards show the stars dressed in their luxurious costume or in their roles as actors and actresses. Many of these are even signed, adding only further excitement to the collection.

Do you as a specialist have a personal favourite?

My personal favourite is the early postcard which is a portrait of Winston Churchill as a young man. For Churchill collectors simply the date of the photograph holds enough interest alone, possibly being the earliest known portrait of Churchill to feature on a postcard. Even more excitingly however, this card is signed by the man himself. Fervour and intrigue around Churchill remains at an all-time high, and such a rare combination of factors means that we are guiding this postcard at a conservative £400-£600.

A signed portrait of Winston Churchill.

Who will the collection appeal to and why?

The collection has an exceptional amount of cross-appeal. The beauty of postcards as an ‘affordable work of art’ means that it is possible to collect a great many topics in this format. Military enthusiasts can collect cards related to their specialism, social history buffs can collect scenes documenting people, places, and animals – even greetings cards are represented strongly here, with one album dedicated to late Victorian greetings cards, some of which I have never seen before, and which even for somebody with no particular previous interest in postcards are still bound to melt the heart.

What is the collection worth as a whole? How will it be lotted?

The collection overall is worth over £2,000. Generally each album is sold individually. Some benefit from an overall theme by the original collector, some are a mixed lot which document the vivacity and sense of fun that could be had living in the early 20th century, with amusing notations and missives noted to each reverse.