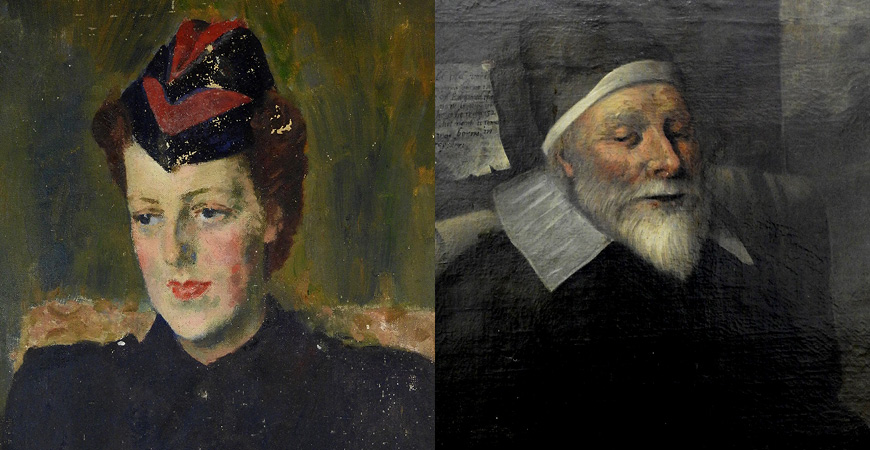 The portrait of a courageous woman who was awarded the George Medal for gallant conduct during the Second World War Blitz sold for £1,700 last week.

The unframed, half-length oil painting of Gillian Kluane Tanner, wearing the uniform of the Auxiliary Fire Service’s London branch, went under the hammer on the first day of our £300,000, two-day auction of pictures, silver, jewellery, coins and medals.

Gillian Tanner was awarded the George Medal while stationed as an auxiliary fire officer at Dockhead Station, Bermondsey during the Blitz. A letter from the Ministry of Home Security stated in 1941, the award was made for “gallant conduct on 20th September 1940 when for three hours you drove a lorry from fire to fire replenishing petrol supplies during intense bombing”.

The London Gazette of January 31, 1941 reported: “Six serious fires were in progress and for three hours Auxiliary Tanner drove a 30-cwt lorry loaded with 150 gallons of petrol in cans from fire to fire replenishing petrol supplies, despite intense bombing at the time. She showed remarkable coolness and courage throughout.”

Included with the painting were portraits of her mother, Mignon Margaret Muirhead Gould and grandmother, Emily Gertrude Lilias Muirhead.

Top price in the pictures section was £3,800, which was shared by an 18th century Italian School portrait of Henry Benedict Marie Clement Cardinal Stuart, Cardinal of York (1725-1807) and a portrait of a nobleman in armour by a follower of Sir Peter Lely (1618-1680).

Henry Stuart was the younger son of King James III and VIII and of his wife Maria Clementina Sobieska. In 1745, he attempted to support his brother Charles Stuart (Bonnie Prince Charlie) in the 1745 rebellion from France by raising troops.

He saw military service at the siege of Antwerp in 1746 but otherwise followed a career with the Catholic Church in Italy. On the death of his brother in 1788, he was recognised as ‘King Henry IX’ by the Jacobites. He died in Frascati in 1807.

An 18th century portrait of Shropshire farm labourer Thomas Parr, who is reputed to have lived for nearly 153 years and is buried in Westminster Abbey, sold for £850.

Born in the village of Winnington near Shrewsbury, Thomas found fame because of his longevity Thomas and was taken to London to meet King Charles I. He lived for 152 years and 9 months through the reigns of 10 monarchs and was buried in Westminster Abbey by order of the king. It was said that but the change in diet, with rich wines and the city pollution were too much for Old Parr who died within a few weeks of arriving in London.

A collection of 50 maps, amassed over a period of 25 years by Shropshire collector Gordon Hillier, attracted a good following as they sold for £20,000.