It was full steam ahead for a piece of railway history from Mid Wales and borders as it sold for £4,100 on Wednesday. 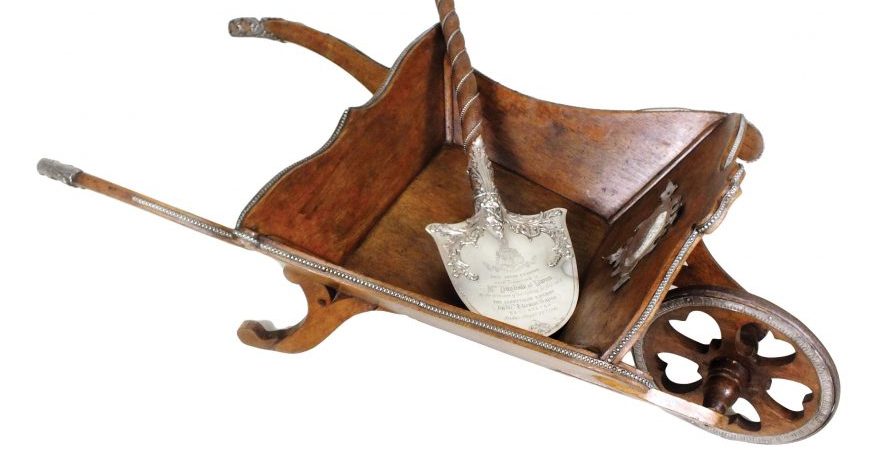 It was full steam ahead for a piece of railway history from Mid Wales and borders as it sold for £4,100 on Wednesday. The commemorative oak silver mounted wheel barrow and spade, presented to Mrs Dugdale of Llwyn, Llanfyllin by contractor Thomas Savin to mark her cutting the first sod of Llanfyllin Railway on Friday, September 20, 1861, was secured by a mid Wales bidder at our successful country house auction.

Made by Stephen Smith and William Nicholson, Duke Street, Lincoln Fields, London 1861, the wheelbarrow and spade also included a song sheet with lines composed by I. Glan Abel and attracted keen interest from specialist collectors.

Llanfyllin Railway opened from Llanymynech via Llansantffraid, Llanfechain and Bryngwyn in 1863 to allow access to limestone quarries and the main line from Oswestry to Newtown. The branch line to Llanfyllin closed in 1965 under British Railway’s Beeching axe.

Thomas Savin was a controversial Victorian industrial entrepreneur and former Mayor of Oswestry who went bankrupt after developing much of the Mid Wales railway system.

In 1857, he formed a partnership with David Davies to build the Vale of Clwyd Railway and the became principle contractor for many of the lines that became the Cambrian Railways. The partnership was dissolved in 1860.

He also had an interest in or worked on a number of other railways, including Corris, Kington and Eardisley and Bishop’s Castle. Savin’s bankruptcy in 1866 led to the stalling of Aberystwyth and Welsh Coast Railway, which became a part of Cambrian Railways.

“Railway heritage items with this level of provenance always attract great interest from collectors and we were delighted with the price it realised,” said fine art director Jeremy Lamond.

It proved a good day for rare and unusual pieces. A Copeland earthenware platter from a service made for the ward room on HMS Discovery during the British Arctic Expedition of 1875-’76, which was discovered at a valuation event on Anglesey, sold for £1,150 to a Cumbrian buyer.

The platter was made for HMS Discovery to mark the British Arctic Expedition led by Admiral Sir George Strong Nares (1831-1915), which was sent by the British Admiralty to attempt to reach the North Pole via Smith Sound. Two ships, HMS Discovery and HMS Alert, sailed from Portsmouth on May 29, 1875.

Although the expedition failed to reach the North Pole, the coasts of Greenland and Ellesmere Island were extensively explored and large amounts of scientific data were collected.

There was also a Royal flavour as a boxed piece of wedding cake from the marriage of Prince Charles and Lady Diana Spencer at St Paul’s Cathedral on July 29, 1981, accompanied by range of ceremonial and souvenir programmes, commemorative coins and related stamps, sold for £700.

An autograph book that belonged to James Bond author Ian Fleming (1908-1964) sold for £420. The book contained a range of autographs together with a pen and ink cartoon doodle of cowboy silent movie star Tom Mix in a ten gallon hat with two six shooters and his horse, which was signed ‘Tom Mix arrives’ Ian L. Fleming, Eton’.

Mr Lamond surmised that Tom Mix might have been the inspiration for Fleming to create James Bond.

“It was a lively and well attended auction with some interesting lots which was reflected in the above estimate prices that we achieved,” said Mr Lamond. “The niche market lots in the auction did very well.”