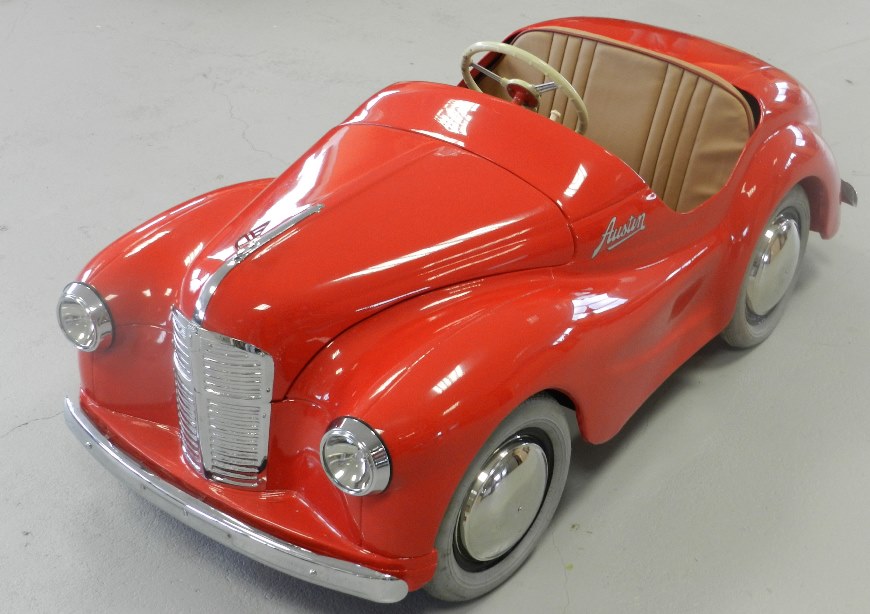 Fine art auctioneers Halls are anticipating a surge of interest from collectors when two Austin J40 pedal cars go up for auction in Shrewsbury next week.

Fondly known as the Joy Car or Junior Austin, the car was manufactured from 1955 to ’71 by disabled miners at a factory in the village of Tiryberth, near Bargoed in South Wales.

The car was built at the instigation of Lord Nuffield, owner of BMC, soon after the Second World War and were sold in Austin salerooms for £20, which was a considerable price at the time. It has a dummy engine with spark plugs, a handbrake and electric lights and a horn.

One of the two examples that will be going under the hammer in Halls’ Toys and Collectibles Auction on Wednesday, September 23 has been restored to pristine condition by a former Shropshire motor service parts manager and is valued upwards of £2,000.

“You wait for years for an Austin J40 to come along, then ironically two turn up on the same day,” said Stewart Orr, Halls’ toys specialist. “They made 16,000 of these cars but many ended up in scrapyards and they were also used on fairground rides.

“There is a big collectors’ market for these cars and people love to buy them in unrestored condition. They were made of substantial sheet metal to the point where they are almost too heavy for children to pedal easily.”

Also included in the auction is a fully restored 1920s dapple grey rocking horse by Ayres, considered to be the premier manufacturer, which is expected to fetch around £1,500. The owner has pledged to donate the proceeds from the sale to charity.

The second part of a huge collection of Hornby model railway ‘00’ locomotives from a Shropshire collector will also be up for sale. The first part sold for £1,200 in July.

Looking forward to Halls’ next toys auction November 18, Mr Orr expects to include a lifetime’s collection of around 1,000 comics, including Star Wars and Star Trek, from a late collector in Southport.

The Battlefield saleroom will be open for viewing on Tuesday from 9.30am to 4.30pm and on the morning of the auction. For more information about the auction, contact Halls on Tel: 01743 450700 or view the catalogue online at: www.hallsgb.com/fine-art .