Paintings by noted French artists for auction in spring

Two oil paintings of Venetian scenes by noted French artist Mark Aldine and a watercolour and gouache by Parisian artist Eugene Galien-Laloue have been entered in Halls March auction. 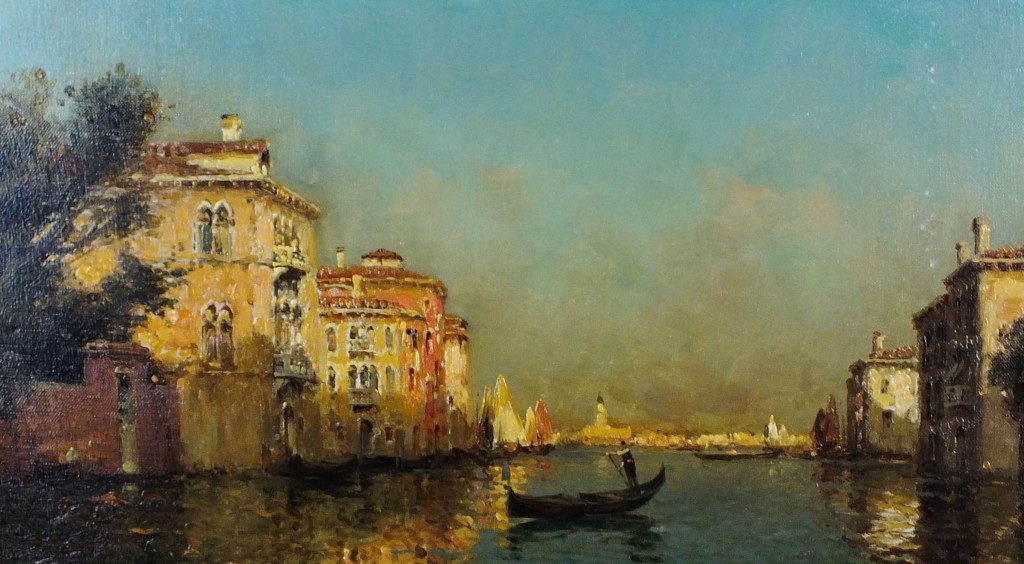 Two oil paintings of Venetian scenes by noted French artist Mark Aldine and a watercolour and gouache by Parisian artist Eugene Galien-Laloue have been entered in Halls March auction.

The paintings by Aldine, the pseudonym for Antoine Bouvard (1870-1955), have been consigned by a Derbyshire art collector and are expected to fetch around £25,000 at auctioneers Halls’ auction of paintings, silver and jewellery in Shrewsbury on March 18.

Both paintings are of Venetian canal scenes with a figure in a gondola, sunlit buildings and fishing boats in the distance. One carries an estimate of up to £15,000 while the other is expected to realise up to £12,000. The owner paid £37,000 for them at the height of the market some years ago.

The Parisian street scene by Galien-Laloue has been entered by a South Shropshire art collector at an attractive pre-sale estimate of £5,000, having originally purchased the painting from a Midlands art dealer for £22,000.

“Mark Aldine is renowned for having specialised in Venetian scenes and the two pictures we have are typical, beautifully painted examples, capturing the very essence and atmosphere of that city,” said Allan Darwell, head of Halls’ art department.

“His pictures show the influence of Felix Ziem, capturing the warmth and beauty of Venice. One of the paintings is sold together with copies of the original invoice from the gallery and the insurance valuation of £25,000.

Bouvard, alias Aldine, was born in St.Jean-de-Bournay in L’Isere, trained as an architect and studied art and architecture at the Ecole des Beaux-Arts, Paris under Constant-Dufeus. He later became director of architectural services for the Seine, responsible for several major building projects in the city.

Like the two Venetian scenes, the work by Galien-Laloue (1854-1941) is in extremely good condition and contained within a museum quality frame and glass. The painting portrays ‘Boulevard Sous La Neige’ in winter with shoppers, a policeman near fashionable shops and vintage vehicles on the street nearby.

Born in Paris, Galien-Laloue was mainly known for his portrayal of Parisian street scenes. In 1877, he was a student of Charles Laloue, an established member of the Artistes Francais and, during the early part of his career, used a number of pseudonyms to overcome an exclusive contract with a major gallery. These included the names L. Dupuy, J. Lievin, and E. Galiany.

“He worked mainly in gouache with a light expressive style and captured the atmosphere of the French street scene of the early 1900s with an accuracy that reflected that iconic era,” said Mr Darwell.

“Indeed he was one of the first painters to historically represent these bustling streets and, as such, has been a great influence to a host of later artists, such as Edouard Cortes and Antoine Blanchard.”