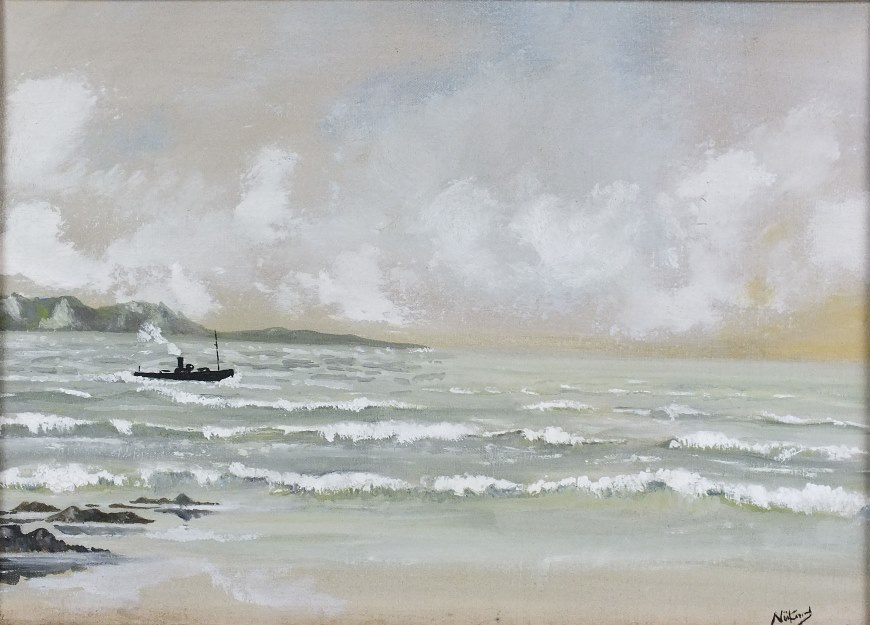 Depicting a ship in choppy waters off West Sussex, ‘Off Shore Shoreham’, a 22cm by 31cm oil on canvas painted in 1950, was consigned to fine art auctioneers Halls’ £200,000 fine paintings, silver and jewellery auction at the Battlefield salerooms in Shrewsbury.

After keen competition from telephone and online bidders, the painting sold to a Scottish bidder for four times its pre-sale estimate.

It is claimed that Coward was advised on oil painting technique by late Prime Minister Sir Winston Churchill, who was no mean amateur artist himself, during a visit to the playwright’s mountaintop home, Firefly Estate in Jamaica.

An allergy meant that he had to wear plastic gloves when painting with oil and he often gave away his paintings to friends.

Coward was less than complimentary about commercial art, writing in his diary: “Compared with the pretentious muck in some London galleries… my amateur efforts appear brilliant”. Even the Old Masters didn’t escape his barbed comments, as he remarked: “Mona Lisa looks as if she has just been sick, or is about to be.”

Allan Darwell, head of the art department at Halls, said: “The vendor lives in Australia and she inherited the painting from her parents who purchased it from a gallery in the 1970s. Our auction provided a rare opportunity to purchase a painting by someone so famous, given that there is a very buoyant market for pictures by Churchill and Coward.”