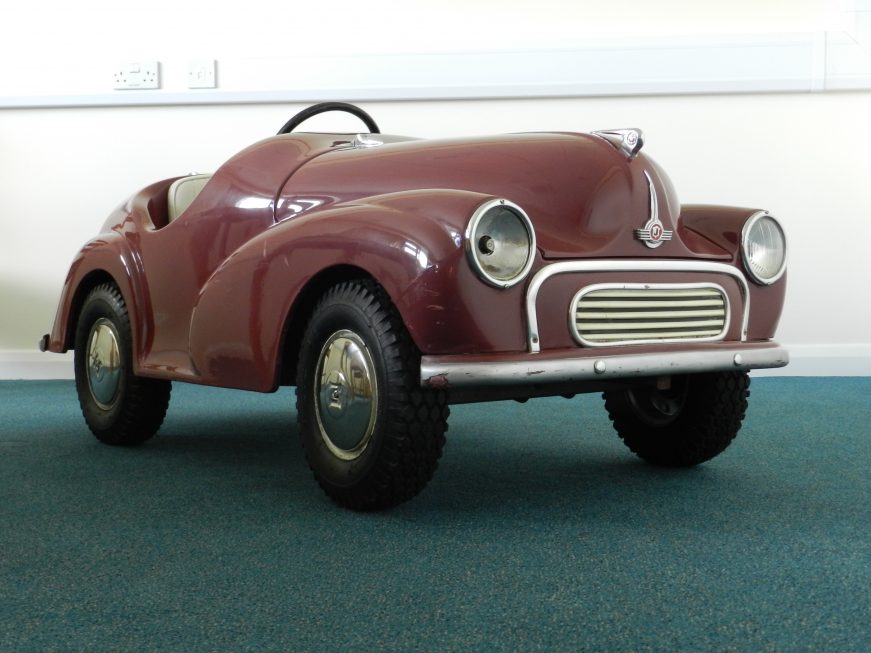 A pedal car version of British favourite, the Morris Minor and a rare model of a locomotive made to celebrate the centenary of Germany’s first passenger train service stole the headlines at our toys and collectibles auction on Wednesday.

The 1993 plum coloured mini version of the original Morris Minor, which made its debut in September 1948, was snapped up for £2,100 by a London collector after keen competition from telephone and online bidders at Halls’ successful auction.

Just 56 of these pedal cars were made by the Morris Minor Centre of Bath, as they never captured a public following, but they have subsequently become collectors’ items.

Halls’ toys specialist Stewart Orr was delighted with the price realised. “This particular pedal car always strikes a note with me because I was working at the Earls Court Toy Show on the stand next to the Morris Minor Centre of Bath when it was launched,” he said.

“The company had proudly unveiled their Morris 1000 pedal car with a beautifully finished glass fibre body, working lights and horn. The opening bonnet revealed a dummy engine, whilst the boot provided plenty of room.

“Despite receiving great admiration and many positive enquiries, orders simply did not materialise and only 56 were sold before the model was withdrawn. Perhaps the price of £800 was too much at the time?

“With so few made examples, they rarely come to the market and this one was sold because it’s now grown up owner, who lives in the West Country, needed to pay for his insurance on his first grown up car!”

Another lot to attract great interest was a Marklin ‘O’ gauge 20-volt model of ‘der Adler’ (German for ‘Eagle’), which sold for £2,700. The model was of a replica locomotive made in 1935 to celebrate the centenary of the first locomotive successfully used to transport passengers and goods in Germany.

The original train was made in Newcastle by George and Robert Stephenson and delivered to Bavarian Ludwig Railway for service between Nuremberg and Furth from December 7, 1835.

The rare model train set, which had little evidence of playwear, consisted of a 2-2-2 locomotive with driver and two axle tender, one open coach, one enclosed and one with raised seat for the guard

“This pre-war model train set is very rare in the UK, as they were not sold here,” said Mr Orr. “The only ones I had previously been aware of were in Germany and the United States.

“The set was found by the vendor in his parents’ house in Shropshire wrapped in a Daily Mail newspaper from 1957. It had obviously been put away a long time ago but it had survived really well.”

A late Shropshire collector’s prized collections of N-gauge model locomotives and Matchbox model cars sold for in excess of £9,600. The train collection ran to around 40 lots while there were more than 100 model cars by makers including Oxford Diecast and Vanguard Models.

Other leading prices included £700 for a 1938 boxed 00 scale Hornby Dublo clockwork train set, £650 for a 1920s clockwork model of a motor boat by Bing with its original figure and £360 for a boxed complete 1960 Corgi Batmobile.

Corgi, Dinky and Matchbox toys, both boxed and play worn, were in keen demand. Seven film and TV related models by Corgi and Dinky sold for £250 and a large collection of farm related diecast equipment and vehicles made £220.