Mirror with reputed links to Lowther Castle sells for £3,100

A late 19th century Venetian glass mosaic mirror, reputed to have once been part of the splendid furnishings inside Lowther Castle near Penrith, sold for £3,100 at a Halls Fine Art auction house yesterday 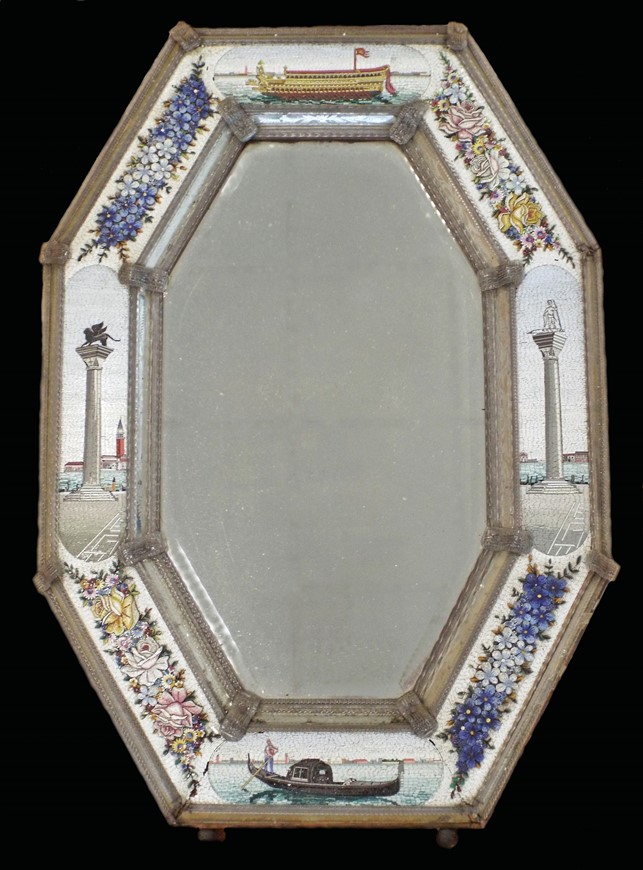 A late 19th century Venetian glass mosaic mirror, reputed to have once been part of the splendid furnishings inside Lowther Castle near Penrith, sold for £3,100 at a Halls Fine Art auction house yesterday (Wednesday).

The mirror went under the hammer at Halls’ 500-lot auction of fine furniture, European ceramics and works of art in Shrewsbury where it was snapped up by Worcestershire buyer.

It was reputed to have been sold at the Lowther Castle auction in 1947 when the sixth Earl of Lonsdale was forced to sell many of the family’s treasures to clear the debts of his brother, the fifth Earl.

Belonging to the Lowther family, latterly the Earls of Lonsdale, since the Middle Ages, the castle closed in 1937 and was used by the Army’s tank regiment during the Second World War. Its contents were removed in the late 1940s and the roof taken off in 1957. The shell is still owned by the Lowther Estate Trust.

Star of the furniture section was an early Victorian mahogany pull-out dining table that sold for £3,000 to an Irish buyer, while a handsome George I style walnut chest on stand attracted keen competition before selling to a Shropshire collector for £2,800, four times its estimate.

Halls capitalised on the recent BBC 1 epic drama ‘The Ark’ and last year’s blockbuster movie ‘Noah’ by selling a 19th century German model of Noah’s Ark with 134 pairs of carved wooden animals for £1,000.

Senior auctioneer and valuer Andrew Beeston said the Ark and animals would have been made in around 1870 and complete sets in good condition were rare to find.

Other leading prices in the furniture section included £2,050 for a George III oak high dresser from a Shropshire vendor, £1,900 for a mid-19th century Welsh oak housekeeper’s cupboard, £1,800 for a Charles II oak dresser base and £1,200 for a mid-19th century Killarney walnut and marquetry pedestal occasional table, which is going home to Ireland.

In the works of art section, a mid-19th century Swiss music box hit the right note at £600, a tapering circular horn money box quadrupled its estimate to sell for £500 and two 19th century teak campaign chests sold for £750 and £480.

A carved table brought back from Africa by an Irish missionary raised £500 for a Shropshire church. The table was gifted to St Mary’s Roman Catholic Church, Madeley by Father Michael Hartley, parish priest, to raise money for refurbishment works.

He was given the table by a parishioner when he was the parish priest in Cheadle Hulme, Cheshire in 1994. The parishioner had inherited it from her mother, who had herself been gifted it by an uncle, an Irish Missionary priest who brought back from Africa in the 1940s.

The table’s carvings, depicting Oba, King of Benin, supported by his courtiers, were believed to be copies of famous bronzes now housed in museums and collections around the world.

In the clocks section, a Victorian single fusee wall timepiece made by Evans, Shrewsbury, which had until recently been hanging in the now closed Baschurch Methodist Chapel, sold for £370, while a George III mahogany eight day longcase clock, with a dial signed ‘Jn Grindall, Dumfries’, made £850.

Star of the small rugs section was a Tabriz blue and red ground carpet that will soon we jetting to to a new home in New York for £1,300.

“The auction highlighted that mahogany and walnut are the decorative lots that hit the mark for interiors whereas oak lots are chosen for originality and age,” said Mr Beeston. “There is still a strong furniture market for the right things.”