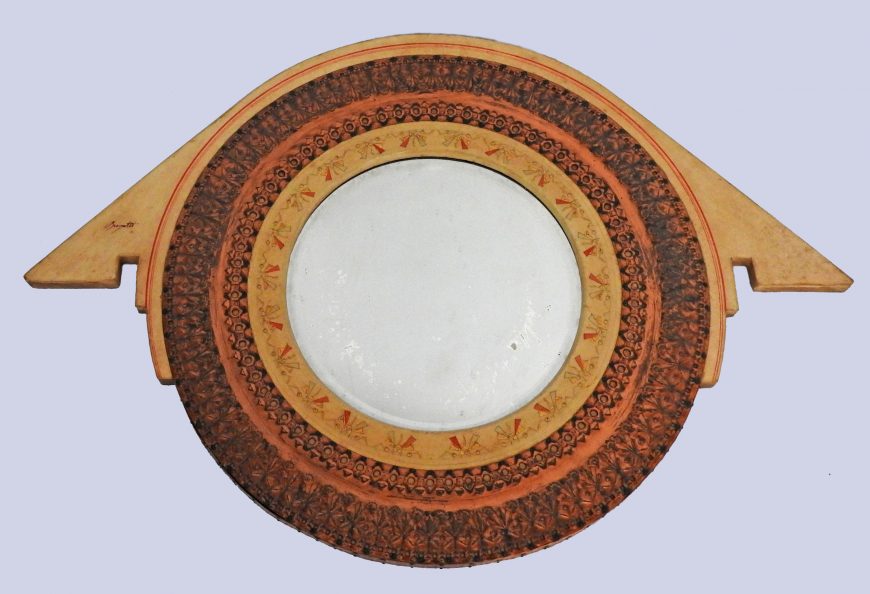 The Bugatti name is probably best known for high performance cars made by Ettore Bugatti’s company and driven by the rich and famous.

But Ettore’s father, Carlo, was also a noted Italian decorator, designer and manufacturer of Art Nouveau furniture and we have one of his mirrors for sale in our next country house auction on April 26 and 27.

The velum and sheet copper framed circular, bevelled wall mirror, which is signed Bugatti, is expected to sell for around £2,000 at the two-day auction.

Our senior auctioneer and valuer Andrew Beeston said: “This mirror is both beautifully designed, signed and useful and will be a great investment for the lucky purchaser.”

The son of Giovanni Luigi Bugatti, an internal decorations specialist, Carlo (1856-1940) studied in Milan and Paris. He began manufacturing furniture in Milan in 1880 before moving to France. He made his name at an exhibition of decorative art in Turin in 1902 and returned to Paris two years later.

Father of sculptor Rembrandt Bugatti and Ettore, he moved to Pierrefonds in Northern France in 1910, where he established an atelier. From 1914 to 1918 he was nominated mayor of the village and devoted himself entirely to painting.

In 1935, at the age of 79, he retired near his son Ettore’s family in Alsace and spent his last months in 1940 at an apartment at the Bugatti factory in Molsheim.

f interest to pop fans and collectors is a quantity of items, including fan club literature, postcards, books, stamps, record sleeves and signatures, relating to The Beatles, Rolling Stones, The Kinks, Donovan, Manfred Man and the Pretty Things. Contained in the cream leather suitcase, the lot is valued at up to £1,000.

he auction also includes a signed photograph of Queen’s leader singer Freddie Mercury, which was given to the owner on his 21st birthday and is valued at up to £800. Two signatures by astronaut Neil Armstrong, the first man to walk on the moon, will also be sold with estimates ranging from £200 to £500

In the furniture section, a pair of 19th century teak boxwood campaign style chests of drawers is valued at up to £2,500, a Japanned chinoiserie style bedroom suite has an estimate of up to £1,800 and a 19th century Gothic revival overmantel in the manner of Pugin and a Victorian Louis XVI style three-piece salon suite are expected to fetch up to £1,500 each.

The auction contains an eclectic mix of items, ranging from a Holland and Holland 12 bore shotgun at up to £2,500 to a letter signed by wartime Prime Minister Winston Churchill at around £250 and an Australian carved boomerang at up to £200.

The toys and collectibles section includes a 1930s five-inch gauge coal-fired steam model of a 0-8-0 tank locomotive, Eva May, at up to £2,500, a half-sized model Series One Land Rover and trailer from a Toylander kit at up to £1,500 and a large Marklin table top steam plant at up to £500.

For more information about the auction, contact Halls on Tel: 01743 450700 or visit www.hallsgb.com/fine-art to view the online catalogue.