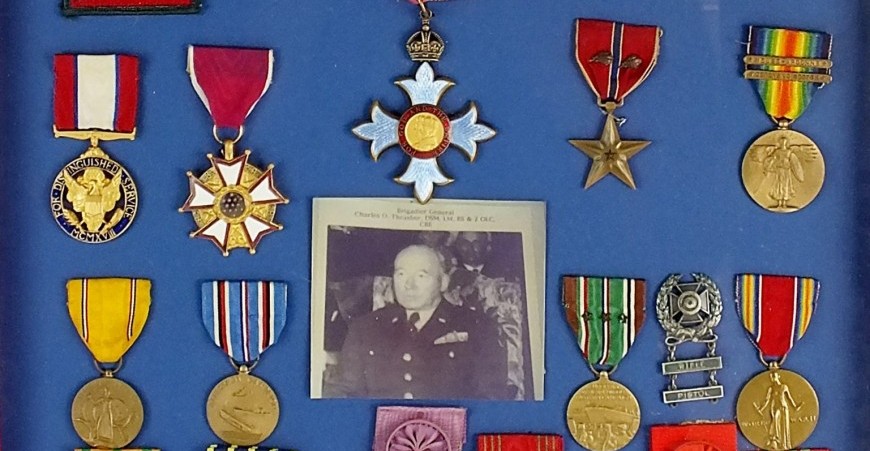 A group of medals awarded to a highly decorated American soldier, Brigadier General Charles O. Thrasher, is expected to sell for around £3,500 at our militaria auction next week.

The group, which is to be sold on Wednesday, includes a Distinguished Service Medal awarded in 1945 for “exceptionally meritorious and distinguished services to the Government of the United States, in a duty of great responsibility during World War II”.

Brigadier General Thrasher was involved in Operation Overlord, the code name for the Allied operation in Normandy that launched the successful invasion of German-occupied Western Europe.

He assumed command of the Loire Section, Communications Zone, in September, 1943, when plans were being established to launch the largest Allied military assault force in history. Working with his British counterpart, he ensured supplies, equipment and service personnel were readily available.

“Through his whole-hearted co-operation with both British military and civilian authorities, General Thrasher established excellent relationships between the American and British troops and the British civilians in the area,” stated the citation for the CBE, which he received from Britain in 1949.

He also received the US Army’s Legion of Merit for his work with Operation Torch, the British and American invasion of French North Africa in November, 1942 and the Bronze Star Medal for his part in the relocation of the 82nd Airborne Division to Belgium and the 101st Airborne Division to Bastogne during the Battle of the Bulge, a major German offensive on the Western Front towards the end of the war.

The group also includes three Croix de Guerre medals awarded by Belgium, France and Luxembourg. All the medals, contained within a glazed wood frame, are included in a lot that also includes a uniform, attached ribbons, side cap, cap badges and stars and a folder with photographs and service history.

Thrasher began his military service by being commissioned Second Lieutenant during World War I, joined the Quartermaster Corps in 1920 and went on to serve in Washington D.C., Hawaii and San Francisco, where he was involved with the Chief War Plans and Training Division.

In 1940, he was commander of Seattle Port of Embarkation and Seattle Quartermaster Depot until May 1942, when he took over command of Base Section, Loire Section, Communications Zone, which he held until June, 1945. He was promoted to Brigadier General in February, 1944 and retired from the U.S. Army in August, 1946. He died in September, 1960 at the age of 73.

Derek Ainsworth, our medals specialists, said it was one of the most impressive medal groups the company had sold and he is anticipating strong interest from collectors in the United States.

Other interesting lots include a torpedo steering gyroscope by the Whitehead Torpedo Works, Weymouth in its original mahogany box, which is expected to fetch up to £1,500.

Robert Whitehead (1823-1905) developed the self-propelled torpedo for the Austrian Navy in the 1850s with gyroscopic control gear after a design by Ludwig Obry in 1896.

He bought the rights to fit the gyroscope to his torpedoes in 1898 which remained in service until the First World War.

Part of a wooden propeller made by Sensenich Brothers in America, which was used as a trophy by airmen from the US 8th Air Force whilst stationed at RAF Burtonwood, Warrington in 1943-’44, is ready for lift off with an estimate of around £300. The propeller is inscribed with 14 assorted names and the ‘The Rounders, England’.
Weapons in the auction include an 1880 Westley Richards & Co ‘monkey tail’ carbine 0.45 calibre valued at around £600 and an East Indian Company Brown Bess flintlock musket and an early 19th century Turkish flintlock blunderbuss at up to £500 each.