Medals awarded to distinguished British soldier sell for £5,000 at auction

A set of nine medals awarded to a highly decorated British soldier who served in India and Afghanistan sold for £5,000 as auctioneers Halls ended a successful year with a £100,000 Christmas collective auction in Shrewsbury on Wednesday 17th December. 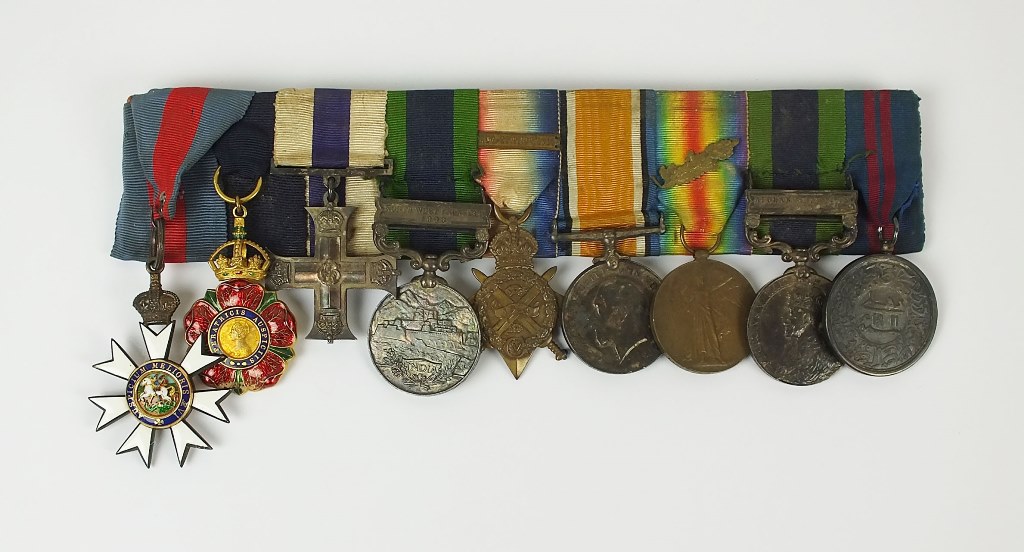 A set of nine medals awarded to a highly decorated British soldier who served in India and Afghanistan sold for £5,000 as auctioneers Halls ended a successful year with a £100,000 Christmas collective auction in Shrewsbury on Wednesday 17th December.

The medals, which belonged to Captain Philip James Griffiths Pipon, included the most distinguished order of St Michael and St George companions and the most eminent order of the India Empire companions. The buyer was an Internet bidder from Australia.

“It was rare to have the whole set of medals which documented Captain Pipon’s entire military service, most of which seemed to have been spent in India,” said Caroline Dennard, Halls’ militaria specialist. ”He was a very well respected person and there are numerous references to him in the British Museum.”

A Military General Service Medal with Albuera clasp from the Peninsular War, which was awarded to Sergeant Hugh Parbut, of the 39th Regiment of Foot, sold for £1,400 and a collection of medals, badges and other items from the First World War belonging to brothers Trooper Percy Osborne of the City of London Yeomanry, who was killed in action at the age of 23 and Private William A. Osborne of the Gordon Highlanders, sold for £500.

Continuing the war theme, an Omega stainless steel wristwatch, which belonged to British Second World War pilot Lieutenant Commander Peter James Hutton, of 801 Squadron Yeovil, who was awarded a Distinguished Service Cross for his part in the Malta convoy 1942-’43, fetched £1,450.

Miss Dennard said the strong demand for the medal groups on offer would hopefully encourage more entries for the next militaria auction on February 11.

In the pictures section, a signed black and white print of the pencil drawing by Laurence Stephen Lowry (1887-1976), titled ‘The Football Match’, sold to a Nottinghamshire buyer for £1,250
An oil painting titled ‘Saturday’ by popular contemporary artist Jonathan Armigel Wade, which depicted huntsmen and hounds crossing hilly landscape, found a local buyer for £1,050 and a signed watercolour of an angler in rain storm by Robert Leslie Howey (1900-’81) made £700.

The ceramics section featured two large Moorcroft vases in the Hidcote Manor pattern, which sold for £1,000 apiece, while a rare Lakin and Poole group of mythical Greek figures Cephalus and Procris, a pair of Royal Worcester vases and an unusual, 20th century twin handled tray decorated in lustre with the figure of a deer amongst fruit and leaves sold for £600 each.

For those seeking a dining table for Christmas, Halls sold an early Victorian mahogany wind-out example for £1,550 and a 17th century oak refectory style table for £850. The gentleman’s library furnishings section included a mid-19th century, micro mosaic desk stand that sold for £1,050.

Demand for rugs has prompted Halls to introduce a dedicated section, which saw a Tabriz carpet from Azerbaijan sell for £700.

Other leading prices were £1,550 for a collection of various items of postal history from 1840-’80, £750 for an early 20th century mahogany barograph, £630 for a graduated three stone diamond ring, £600 for a large collection of coin and stamp albums and £550 for a Hardy’s ‘Perfect’ fly fishing reel.

Halls’ fine art director Jeremy Lamond said: “With 350 registered online buyers from around the world, a packed saleroom and a busy pre-sale preview, this was an excellent collective auction to end a successful year.”