The Meccano No 10 set, which was contained in a four-drawer cabinet, was consigned to Halls’ by a local vendor who had received it as a gift from an uncle. 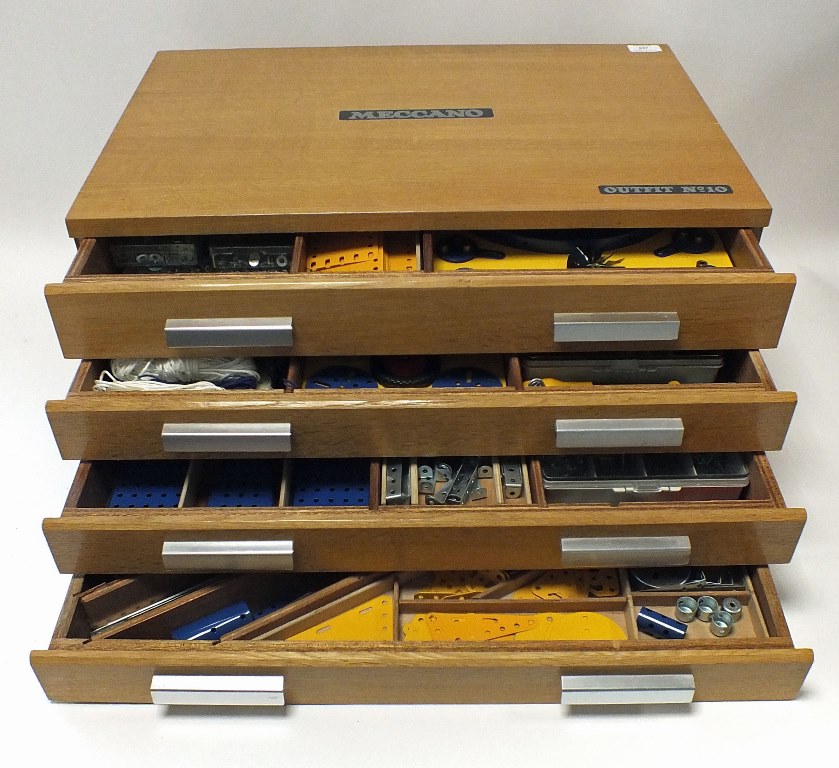 The biggest and best Meccano set that could be purchased in the 1970s stole the headlines at a successful toys auction at Halls as it sold for £800.

The Meccano No 10 set, which was contained in a four-drawer cabinet, was consigned to Halls’ by a local vendor who had received it as a gift from an uncle.

“The set was in virtually unplayed with condition,” said Stewart Orr, Halls’ toys specialist. “The Number 10 set was the biggest and best you could buy and would probably have cost £50 to £60 in 1974. We were delighted with the price achieved at auction.”

A good collection of Herman, Merrythought and Deans teddy bears, consigned by a local collector, sold for £550.

Another highlight was an ‘O’ gauge kit-built model of a British Rail Class 9F locomotive and tender and three wagons hand-built in Great Western livery, which sold for £460. It was the first lot ever sold by Halls’ auctioneer Rebecca Moss on her fine auctioneering debut.

A boxed clockwork Hornby ‘O’ gauge No 2 Special locomotive and tender in LMS livery with the original key and boxes, which Mr Orr said was one of the best examples he had seen, sold for £400.

Other leading prices were £420 for a quantity of unboxed Dinky diecast models from the 1940s, £330 for a complete group of 66 issues of the James Bond Collection magazine with a model car, £320 for a group of 16 boxed Spot-On models by Norev, £240 for a group of 16 boxed Corgi vehicles relating to films and television shows and £230 for a quantity of Britains lead figures and animals.

A tinplate model of a clockwork six light saloon car attributed to Tipp and Co sold for £270. Mr Orr said the electric components were removed from the model by the local vendor’s mother when he was a child because she considered the batteries to be too expensive.

He said the auction again demonstrated the strong demand for Dinky, Corgi and Matchbox diecast toys both in original condition and unboxed and Wrenn, Hornby and Triang model railway locomotives and tenders.

Already consigned to the company’s next toys auction in March are collections of Matchbox and other diecast models, including a perfect boxed specimen of a Corgi Toys Batmobile with all its accessories and an interesting model railway collection.

Halls are holding a toys valuation day at the company’s offices in Whitchurch (10am to 12 noon) and Oswestry (2pm to 4pm) on February 18 to consign lots for the March auction.