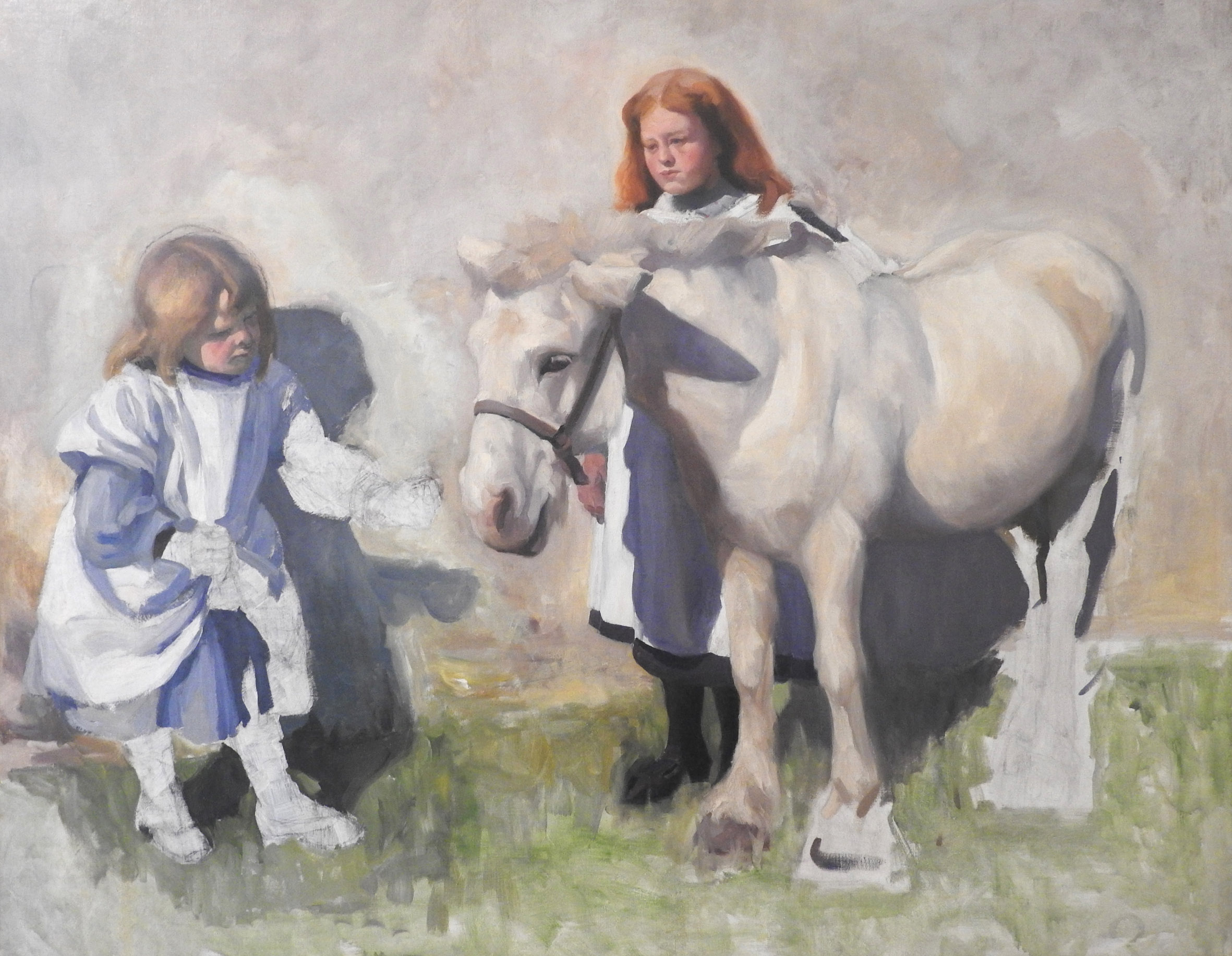 A charming painting by Lucy Kemp-Welch, recognised as the foremost British painter of horses of her time, will be going under the hammer at Halls Fine Art next week.

Kemp-Welch (1869–1958) is best known for her paintings of horses in military service during World War One and for illustrating the 1915 edition of Anna Sewell’s novel Black Beauty.

Now one of her works, a large oil on canvas study of two girls feeding a pony, is coming up for auction at fine art auctioneers Halls’ fine pictures, silver, jewellery and coin auction on March 22nd at 10.00am with a pre-sale estimate for £25,000 to £35,000. The painting measures 111cm by 142cm.

Kemp-Welch travelled to Exmoor in 1908 and produced a series of oil sketches from a studio in Simonsbath. Many were left behind with local people and it was in the 1950s that the sketches were gathered together as a collection by a West Country landowner.

None of the sketches is signed and only one was found to be inscribed with her initials, dated May 16, 1908.

Another work in the auction that is certain to attract attention is an Italian School, 18th century portrait of Henry Stuart, valued at up to £3,500. Born in Rome, the younger son of King James III and VIII and of Maria Clementina Sobieska, Henry attempted to support his brother, Charles Stuart (Bonnie Prince Charlie) in the 1745 rebellion by raising troops in France.

He saw some military service at the siege of Antwerp in 1746 but otherwise followed a career with the Roman Catholic church in Italy. On the death of his brother in 1788, he was recognised as King Henry IX by the Jacobites and died in Frascati in 1807.

Other works to look out for in the auction include a wonderful view over Newlyn harbour by Arthur Hughes (1832-1915). The oil on panel, titled Above Newlyn, was originally sold by Christies as part of a studio sale after the artist’s death and is now valued at £2,000.

A collection of 50 maps, amassed over a period of 25 years by Shropshire collector Gordon Hillier, is another attraction for collectors. Highlight is ‘Salopiae Comitatus’, an engraving by Christopher Saxton, which is one of 35 maps of ‘An Atlas of England and Wales’, first edition 1579, valued at around £800.

For more information about the picture section, contact James Forster, head of Halls’ pictures department, on Tel: 01743 450700 or visit www.hallsgb.com/fine-art