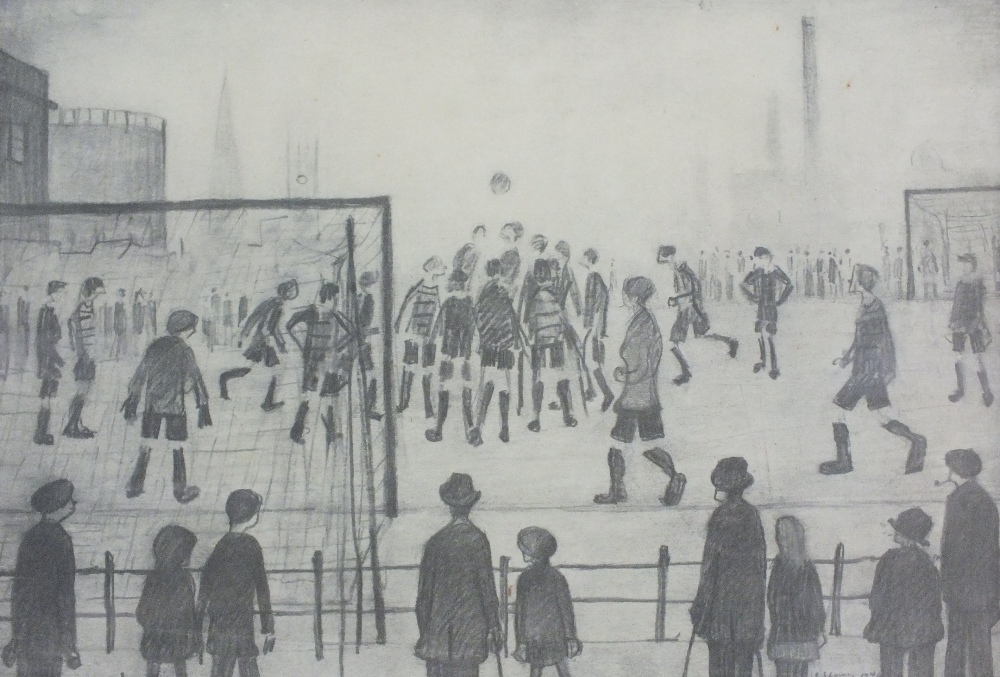 A signed artist’s proof by Laurence Stephen Lowry and an oil painting by popular contemporary artist Jonathan Armigel Wade are two of the potential stars of a Christmas collective auction in Shrewsbury on Wednesday (December 17).

Titled ‘The Football Match’, the black and white print of the pencil drawing by Lowry (1887-1976) is expected to fetch around £250 in Halls’ auction at the Battlefield salerooms, which is designed to be happy hunting ground for shoppers seeking original Christmas gifts.

The painting by Wade, who was born in 1960, is titled ‘Saturday’ and depicts huntsmen and hounds crossing hilly landscape. Valued at up to £800, the painting is certain to attract interest following Halls’ fine pictures auction last month, when another of his works, ‘After the shooting lunch’, tripled its pre-sale estimate to sell for £3,000.

The paintings section also includes a collection of 14 works by Ian W. Green, a Lancashire artist who was friendly with Lowry. His paintings carry estimates ranging from £30 to £150.

Attracting great pre-sale interest in the gentleman’s library furnishings section is a rare, 1848 Gothic Neotypos disc chess set by Pinches and Butler, which is expected to sell for more than £500. The set comprises two original decorative cylindrical tubes each containing 16 flat circular chess pieces, with the queens modelled as Queen Victoria and the kings after Prince Albert.

The ceramics section features a large Moorcroft vase in the Hidcote Manor pattern valued at up to £1,500, a rare Lakin and Poole group of mythical Greek figures Cephalus and Procris, which is valued at up to £800, a pair of Royal Worcester vases at up to £600 and an unusual Maw and Co charger at up to £150.

For those seeking a dining table for Christmas, Halls has three different styles on offer. They include an early Victorian mahogany wind-out example and a 20th century mahogany Regency style tri-pillar example at up to £1,500 each and a 17th century oak refectory style table at up to £1,000.

Demand for rugs during 2014 has prompted Halls to introduce a dedicated section in future auctions, starting next week when they will have 34 Middle Eastern and Asian examples on offer. The company now has a rugs specialist who will be developing the section in 2015.

The silver section is headed by a four piece tea service at up to £700 and a George II Newcastle salver at up to £500, while the jewellery section has a selection of items ranging from £60 to a Garrards and Co 18 carat gold three stone emerald and diamond ring at £600.