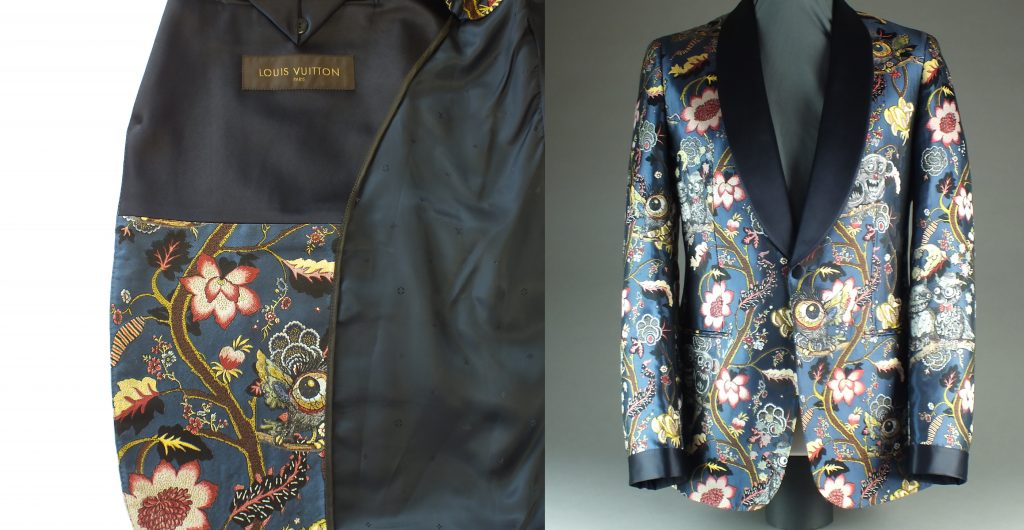 A Louis Vuitton brocade evening jacket, made in collaboration with the Chapman brothers for the 2013 autumn and winter collection, was the star lot as a wealthy gentleman’s wardrobe was sold in Halls timed online auction which ended on Monday.

The collection, most of which had never been worn, included the Louis Vuitton evening jacket, which was inspired by the ‘Garden of Hell’ and sold for £2,400. A similar jacket, which featured the faces of two monkeys, was worn by pop stars Tinie Tempah and Bryan Ferry.

The jacket was the result of a collaboration with the brothers Jake and Dinos Chapman, who again worked with Louis Vuitton on the 2017 Spring men’s collection, producing a series of bags that feature illustrations of wild animals.

The Gucci brand featured prominently in the top 25 prices, with a cream jacket with black edging detail and black and gold crest selling for £420 and shoes by the famous designer selling for up to £280 for a slip-on in black crocodile leather with silver horse bit detail. Gucci suits and coats sold for up to £280.

Church’s shoes and boots also sold well, peaking at £250 for a pair of Oxford black leather shoes with a double buckle in gold.

Halls’ fine art director Jeremy Lamond said: “We were delighted with the sale result, as was the vendor. This unique collection made exactly what we had predicted prior to the auction.

“We decided to sell the collection online by timed auction because we wanted to give men plenty of time to consider the high quality of what they were viewing.

“The owner bought most of the designer collection from Bond Street in London and had the items shipped to his home in Cheshire. Virtually everything was brand new and had never been worn.”

The auction was co-ordinated by Sarah Davies, a fashion graduate who now works for Halls’ fine art team.