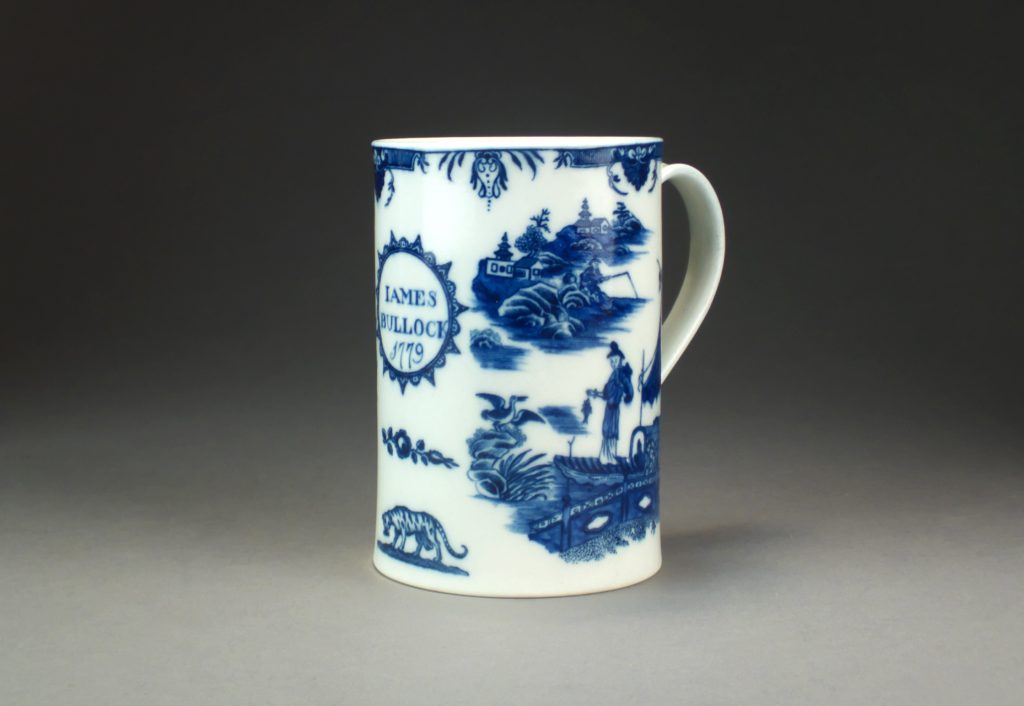 An important collection of blue and white patterned Caughley porcelain assembled by a Shropshire collector sold for £72,000 as part of our Country House Auction on Wednesday.

The collection, which belonged to the Rev Maurice Wright and his wife, Janet and included more than 400 pieces, was valued at around £70,000 and went under the hammer on the first day of Halls Fine Art two-day £300,000 auction.

Caughley porcelain collectors packed the saleroom to bid as the prized collection was sold by Halls’ fine art director Jeremy Lamond. Members of the Caughley Society, of which Mr Wright is president, were invited to a private viewing of the collection last Friday evening.

Each of the pieces had full provenance and many were extremely rare. Top price of £3,700 went to an “exceptionally important” mask-head jug dated 1790 and initialled JH. The jug was printed in blue on both sides with a ‘Severn Trow’ passing underneath the Shropshire Ironbridge and an angler in the foreground.

Halls’ European ceramics specialist Caroline Dennard speculated that the initials could refer to John Hill, a member of the Hill family of Hawkstone who was 21 in 1790. Col. John Hill was born in 1769 and died in 1814, the son of John Hill, 3rd Baronet (1740-1824) and father of Rowland, the 1st Viscount. The Hills of Hawkstone were well known as patrons of both Caughley and Coalport.

Sir John Hill (3rd Baronet) was involved in a Parliamentary scandal and unpleasant family row about the result of the 1796 election. He commissioned the Coalport Election as a protest at the result and a campaign to get the result overturned. He had rejected a claimed family agreement that he would step aside for his cousin, Sir Richard Hill of Attingham, and then lost by 44 votes.

A mug transfer-printed in the Fisherman and very rare Tiger pattern, named and dated ‘James Bullock, 1779’, sold for £2,300. Research revealed a James, son of Joseph and Elizabeth Bullock, was baptised on May 19, 1757 in Kidderminster.

“This is the first known dated piece in the Fisherman pattern and is a relatively early date,” said Miss Dennard. “There is some suggestion that the illustrator of Aesop’s Fables may have been responsible for engraving the tiger on the mug.”

Lot 133: A rare dated mug painted with Fruit Sprays and a wedding inscription sold for £3,100.

“It’s the best and most representative collection of Caughley that we have ever sold,” said Miss Dennard. “It represented a lifetime’s work and Mr and Mrs Wright dedicated their spare time to collecting.

“Mr Wright has been responsible for some of the scholarship behind the Caughley reference book and more than 80 pieces from the collection are featured in the book. The collection created huge interest amongst Caughley collectors nationwide and the fact that our saleroom was full demonstrates how popular it was.

“The auction result shows that the market for 18th century blue and white porcelain is still very strong. People are prepared to pay a premium for the rarest pieces but even the more common patterns achieved good prices.”

Mr and Mrs Wright, who live near Shrewsbury, had collected the porcelain since the 1970s and he was a joint author of the definitive Caughley reference book.

In the foreword to the auction catalogue. Mr Wright stated: “The theory behind our collection resembled stamp collecting – to get one of each denomination and variety. Then by combining patterns and shapes, it was possible to reduce the number of necessary pieces so, when some must-have piece came along, there were spares to sell. The ideal was a rare pattern on a rare shape. We collected only Caughley and eventually only blue and white.

“So, like Topsy, the collection grew until it was overgrown, so Janet said! It may not be the best or biggest in private hands, nevertheless it is probably the most representative collection to come on the market with some undoubted rarities and question marks.“

Halls had previously sold two large Caughley collections. Professor Charles Bawden’s collection made £31,000 two years ago and a Worcestershire collection sold for £56,000 in 2010.

Also included in the auction was a collection of 18th century English porcelain figures by Derby, Bow, Chelsea and other makers which sold for more than £7,000. The figures, which came with an archive of research, had been owned by a Mid Wales family for around 60 years and were collected from a dealer in Winchester.

Top selling lots from the collection were a Bow figure of a milkmaid dating to around 1754, which sold for £1,050 and a Chelsea porcelain figure of a female shepherdess from around 1765, which made £900.