Three oil paintings of horses by noted 19th century Shropshire artist Edward Lloyd all exceeded their pre-sale estimates as they sold for more than £1,000 at a Halls’ auction. 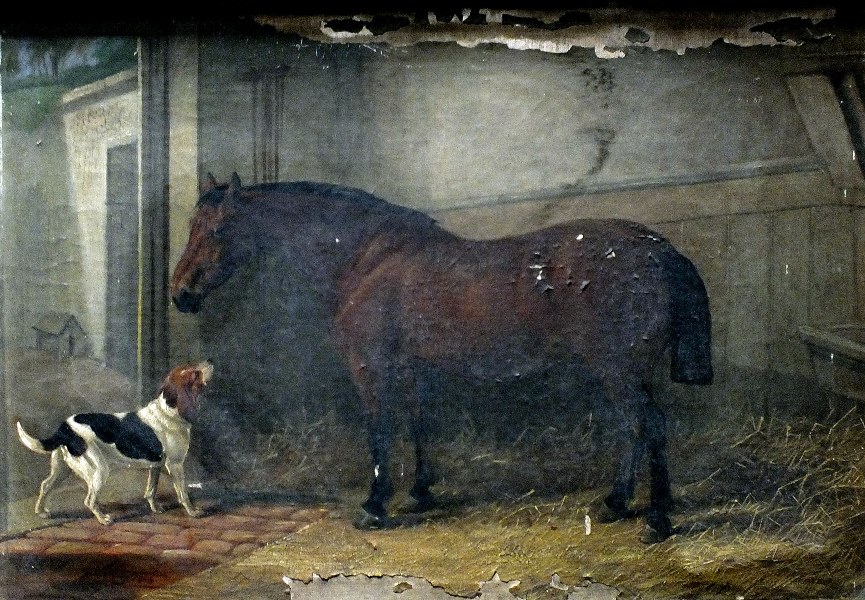 Three oil paintings of horses by noted 19th century Shropshire artist Edward Lloyd all exceeded their pre-sale estimates as they sold for more than £1,000 at a Halls’ auction.

The paintings, which all required restoration work, went under the hammer at Halls’ toys and interiors auction at our Battlefield salerooms. ‘Favourites of the Rev’d J. W. Moore M. A., Rector of Mardley, Salop’, signed and dated 1864, sold for £500, a brown hunter standing in a stable interior, signed and dated June, 1894, made £320 and a saddled hunter standing in a landscape, signed inscribed ‘Ellesmere’ and dated 1832, made £240.

A further oil painting of a horse by Lloyd, which is in better condition, has been consigned to Halls’ fine pictures, silver and jewellery auction on March 18.

Lloyd (1818-1901) had a close association with Ellesmere and the large country estates of Shropshire and Welsh border and his work has been compared to another more famous English artist Sir Edwin Henry Landseer (1802-‘73).

Lloyd was a competent sporting painter from Ellesmere who specialised in animal portraiture, particularly horses, as well as sheep and cattle. He exhibited ‘Shropshire Down Sheep’ at the Royal Academy in 1861, whilst he lived at Willow Street, Ellesmere.

Many examples of his work hang on the walls of country estates in Shropshire and Wales, including some fine examples at Attingham Park.

The paintings consigned to Halls’ auctions were accompanied by a letter from Miss Muriel Faulk, dated January, 1993, whose family was friendly with Lloyd. Referring to one of the paintings in Wednesday’s auction, the letter states: “This horse was the favourite hunter of Mr Boodle of Bank Farm, Dudleston, Ellesmere and I can guarantee that the artist was Edward Lloyd of Ellesmere, who painted it in 1838.

“Edward Lloyd was trained as an artist by Mr Agnew of Manchester and subsequently excelled as an equine artist. The Marquis of Hastings, nicknamed “Champagne Charlie”, once wagered that he could produce a finer equine artist than Landseer.

“Edward Lloyd and Landseer both painted a portrait of the same horse, their signatures were masked and a panel of experts unanimously agreed that Edward Lloyd’s painting was immeasurably superior.

“The artist died before I was born in 1901, his family and my own shared a unique friendship.
We lived at Green Banks, Northwood, near Ellesmere. My father bought this painting of the hunter at the sale of Miss Boodle’s effects which took place on the Thursday following the wreck of the Titanic.”

Other paintings sold in this week’s interiors auction included an oil signed ‘Ross and dated 1999 of a beach scene with figures that sold for £440 and artist’s proof after Beryl Cook (1926-2008) titled ‘Meadow Suite’, which made £230.