One of the most labour intensive and, consequently, highly prized of the Asian arts is cloisonne enamel.  Distinctive, rich and ceaselessly varied, this sought after branch of the decorative arts is a triumph of craftsmanship; for the end product to be worth so much when the raw materials used to make it are comparatively humble.

Such was the esteem in which cloisonne was held during the Qing Dynasty in China that the emperor Qianlong (1736-1795) ate his food from cloisonne dishes while his retinue dined on gold, silver or porcelain tableware.  The production of this art form requires an army of craftspeople, each adept at their part of the process, and several weeks or even months to complete a single work. It is only through this process that the simple materials of copper and glass are combined to such extraordinary effect. 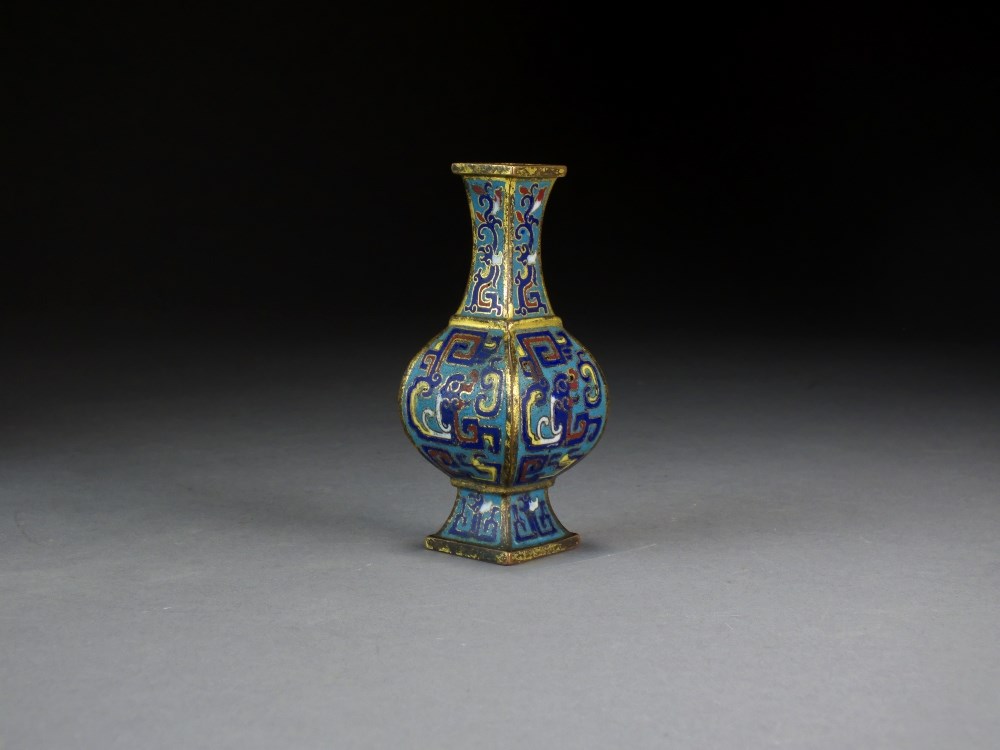 Red copper is the base material of choice which the Chinese artisans of the Ming Dynasty found to be highly ductile.  This allowed the development of thin and light shapes onto which a fine wire could be fused forming the ‘cells’. The term cloisonne is derived from the French ‘cloison’ meaning ‘partition’ or ‘compartment’ and these are formed using fine copper wire that must be carefully bent to shape before being applied to the body of the object.  The wire is bonded using a glue made from bletilla tuber so that it stays in place to form a complete design. To fuse the design to the body, it is fired using a zinc brazing flux.

With the design fixed in place the next stage is filling with colour.  This is a special glaze made with metal oxide for the hue together with quartz and silica as well as gypsum and borax which would help the main ingredients to melt. In addition, calcium flouride and arsenic were used to clarify and opacify the mixture.  This glaze was mixed and fired to fuse it together and then, when cooled and solid, it was ground into a fine powder, ready for applying to the copper ware.

The most common colour used in cloisonne is blue and it is this colour that gives its name to many of the processes such as ‘blue painting’ and ‘blue firing’.  The glaze powder is mixed with water and then applied with a tool known as a ‘blue gun’ and a straw to each individual compartment of the design. Depending on the complexity of the pattern, this could be an extremely time consuming process and one requiring high levels of skill and artistry. 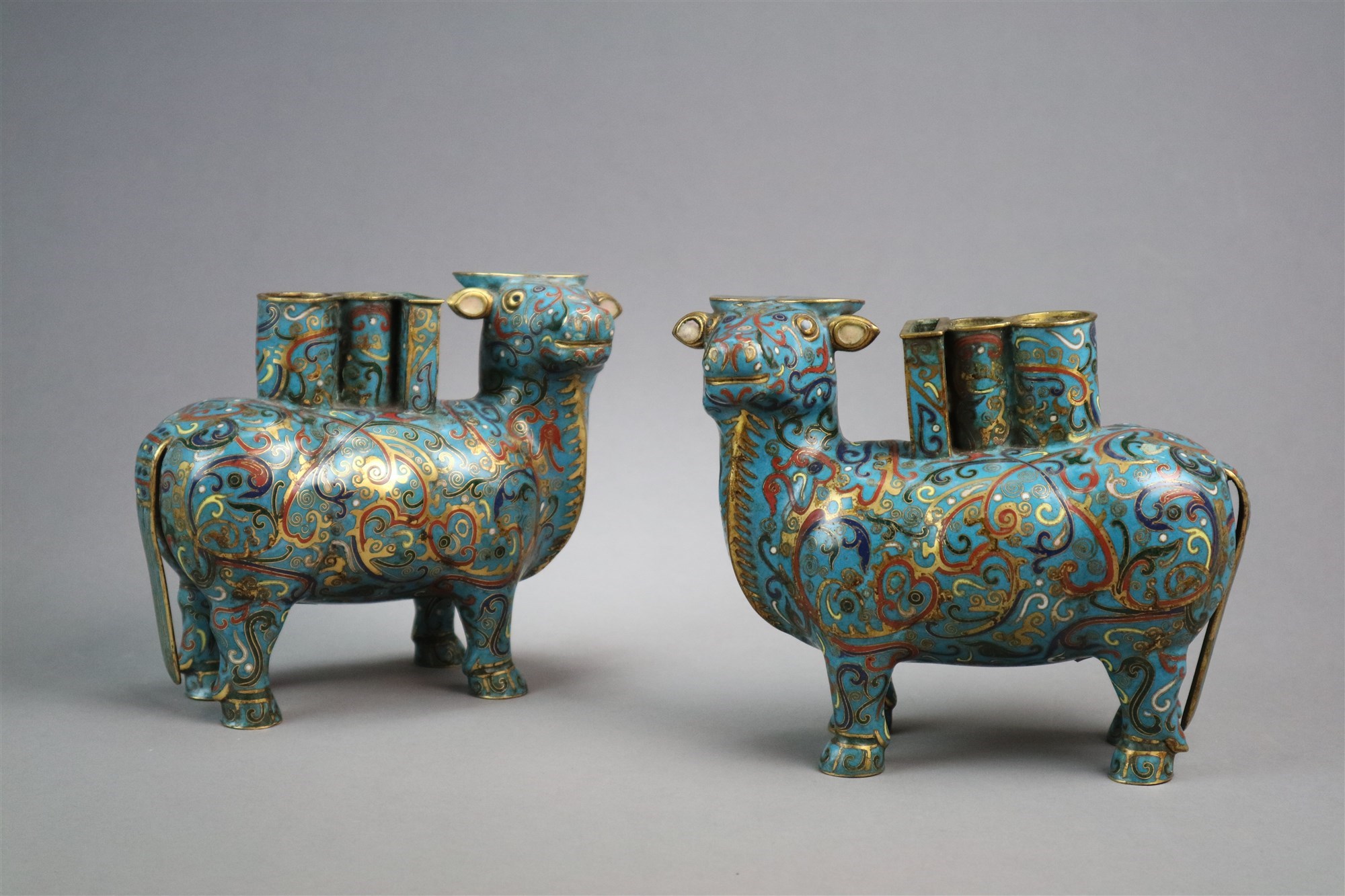 Once completely filled with glaze, the object goes through its first blue firing.  As the water from the glaze evaporates, it fuses with the body but sinks below the level of the copper wire.  And so the process of filling with glaze and re-firing begins again, up to three further times, until the glaze is flush with the wire.  During the Ming and Qing Dynasties, the firing kilns used wood fuel and so building up to the correct temperature would take four to six hours.

After the last glaze firing, there was still a further major process to complete.  Polishing the ware was another highly skilled job, carried out by a craftsman with technical knowledge across all processes, such that they could detect faults that might need putting right.  The polishing was carried out using grinding stones of increasing fineness; first emery, then yellow stone and finally basswood carbon, creating a perfectly smooth, glassy surface.

The last process is a final firing with clear glaze followed by gilding.  The gilding of exposed copper serves firstly to prevent the metal from oxidising but also adds a touch of splendour to the object.  Each of these essential steps in producing the best cloisonne was lengthy and laborious but also demanded the very best craftspeople to carry them out.  The end result was a material considered more precious than gold which is small wonder that it became the preserve of emperors. 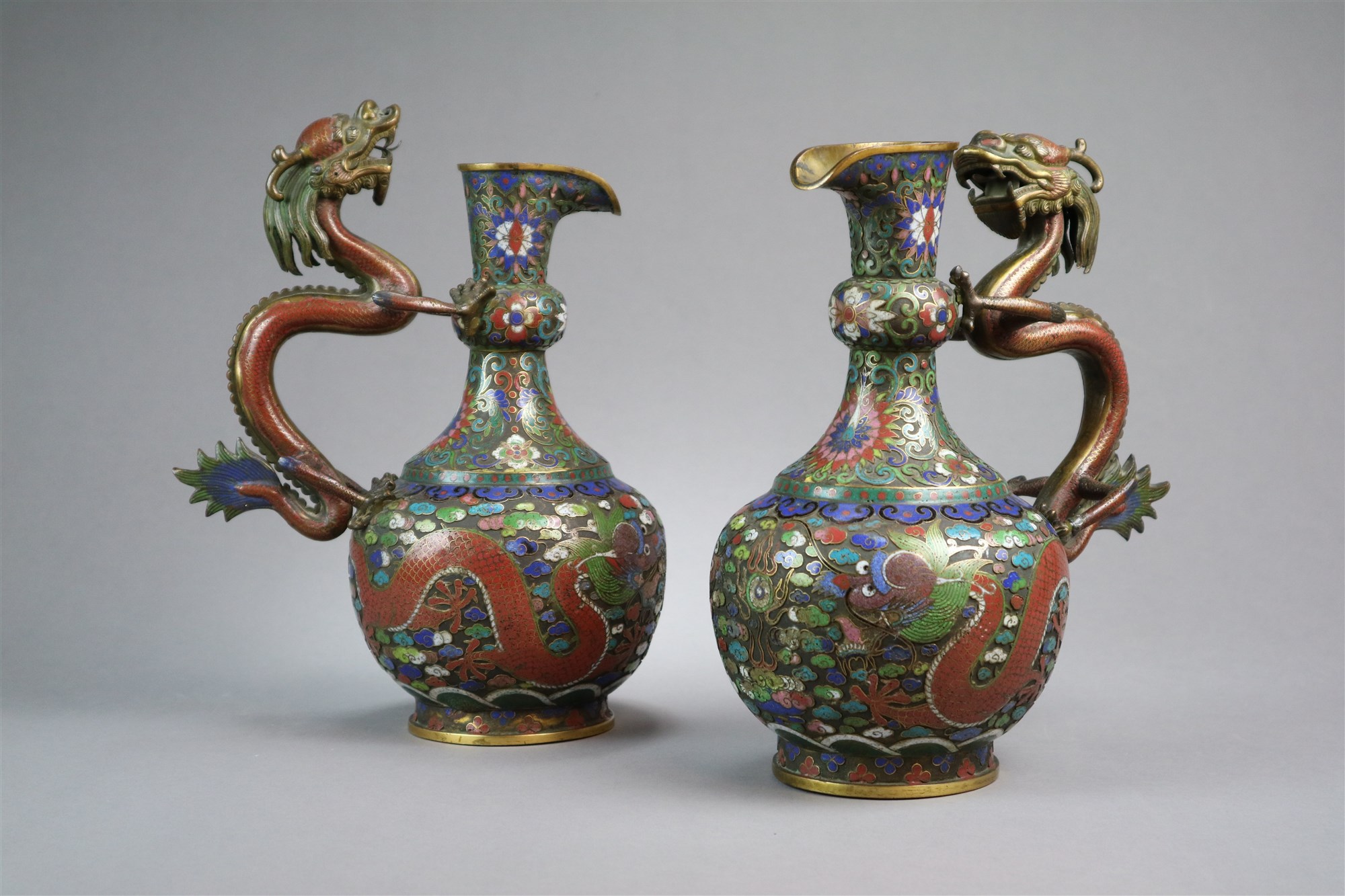 The art spread in various forms around central and Eastern Asia including Japan.  And while the examples of the Ming and early Qing Dynasty are the most revered of the Chinese output, it is much later that the apex of Japanese cloisonne arrives.  The Meiji period (1868-1912) was an era of increased open trade with Western cultures and, consequently, a time of intensive creative activity with some of the finest decorative arts including lacquer, carved ivory, ceramics and enamel wares.

The process of making cloisonne in Japan was very similar to that of the Chinese masters, but the end result was very different and highly distinctive.  The very best examples used silver wire to form the cells and the artisans became adept at creating subtle gradations of colour within the cells.  In this way, some extraordinary scenes and studies of flowers, trees, birds, insects and fish among other subjects were rendered, often in incredible detail.

A small Japanese cloisonne vase and cover
by Namikawa Yasuyuki.
Sold for £5,500 (+premium)

Cloisonne enamel is a terrific collecting area because there is so much to choose from in style, colour and period as well as suiting a range of budgets.  It is still made today in China and Japan and so good 20th century examples can be obtained at reasonable prices at auction.  For the bigger budget, though, the Qing Dynasty (1662-1912) is the high period for Chinese examples while the Meiji era (1868-1912) is where you’ll find the best of Japanese examples.  Condition is vital with cloisonne as it is practically impossible to repair or restore effectively if damaged so always ask for a condition report or, better still, view the auction in person.  As with all antiques and art it’s best to buy what you like but if you’re new to the scene and need advice, you can always ask an expert.

Realise the Value of Your Asian Art