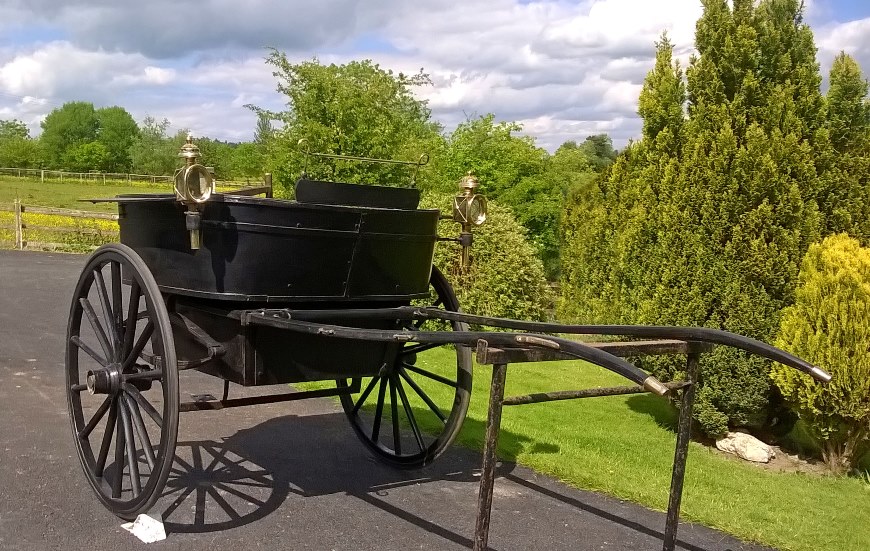 A 17th century style oak four poster bed and an early 20th century governess carriage are two of the more unusual lots that will be going under the hammer at Shropshire’s leading fine art auction house on Wednesday.

The four poster bed, the headboard of which bears the date 1669, has been consigned by its Shropshire owner to Halls’ auction of fine furniture, European ceramics and works of art in Shrewsbury on Wednesday, July 22 where it’s expected to fetch up to £1,200.

The governess carriage, which was made by Castle and Sons, Newark in 1903 and refurbished in 2000, also comes from a local vendor and is valued at up to £2,000.

Other interesting lots include a Liberty & Co pewter mantle clock, which was a wedding gift to a member of the Shropshire owner’s family in 1927 before they moved to Indian, where the husband was stationed. The clock, valued at up to £900, has an enamelled iridescent green and blue dial, which is popular with collectors.

An “interesting” item tipped as “one to watch” by Tim Wonnacott, presenter of BBC’s Bargain Hunt antiques show, is an ancient Egyptian granite head of a deity, possibly dating to 1190-1075 BC, which carries an estimate of up to £5,000.

Of particular interest to Shropshire is an industrial patinated iron sculpture of a figure on a scrambler by Madeley sculptor Gerry Foxall, which is signed 1976 and valued at up to £400. Foxall’s best known work is a large miner’s horse and cart, which is a landmark on the Granville roundabout.

A 20th century version of a George I Chinese style scarlet lacquer, double dome bureau bookcase, which sold for £120,000 at Halls in 2011, is on offer at a more affordable £1,500 to £2,000.
For those hunting large dining tables Halls have three in the auction with estimates of up to £3,500, while a 19th century French figured walnut bureau plat is expected to sell for up to £2,500.

In the ceramics section, a group of five late 19th century Meissen figures allegorical of the senses carries an estimate of up to £4,000 and is attracting international interest while an assembled Herend ‘Rothschild Birds’ pattern part table service, with 135 pieces, is expected to fetch up to £1,500.

Collectors of Shropshire local history may be interested in the uniform and collection of items relating to Police Constable James Price of the Shropshire Constabulary at the beginning of the 20th century, which is modestly valued at £70 to £100. Born in 1876, Constable Price died in 1955 and was stationed at Church Stretton, Newcastle and Wistanstow between 1901-’26.