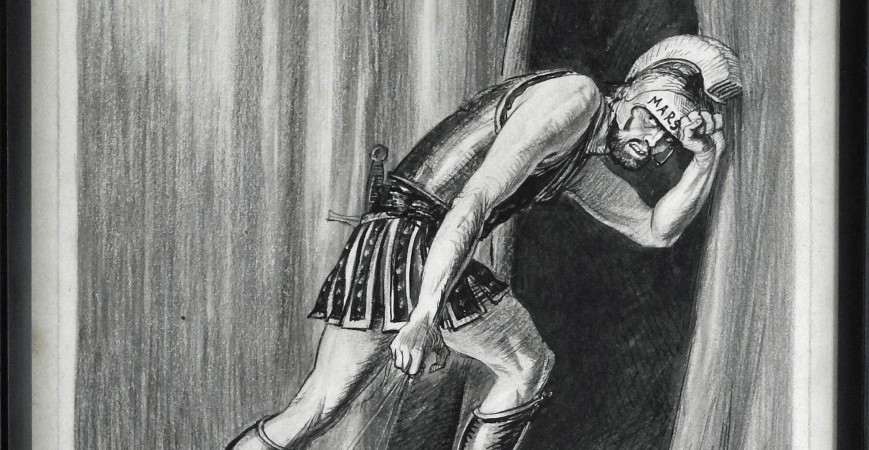 A collection of four original ink studies by illustrator Ernest Howard Shepard for Punch magazine, cartoons relating to the Second World War sold for £2,500 at auction on Wednesday.

The studies went under the hammer at our successful auction of affordable pictures, which included a selection of prints, watercolours and paintings and attracted enthusiastic bidding in the saleroom and online.

Shepard (1879-1976) is best known for bringing to life Winnie the Pooh with his drawings, which he later regretted as he believed it completely overshadowed the rest of his work. His main occupation, from 1921-’53, was as one of Punch magazine’s leading political cartoonists.

During the First World War, Shepard served in France, Belgium and Italy, was awarded the Military Cross for bravery in the field and reached the rank of major. He continued to draw sketches and illustrations of life at the front during the war.

In 1921, he joined the staff at Punch, succeeding Leonard Raven Hill as second cartoonist in 1935 and became first cartoonist in 1945. His granddaughter, novelist Penelope Fitzgerald, said he was ill-suited to being a political cartoonist as “he neither found it easy to get a likeness nor could he manage the sheer indignation which gives political satire its weight.”

Despite the fact that his political cartoons are often more interesting and time-consuming, they sell for a fraction of the price of his Winnie the Pooh illustrations.

“The E. H. Shepard cartoons sold in excess of my expectations and demonstrates that his stock continues to rise as an illustrator,” said James Forster, head of our pictures department.

“There was a good momentum in the auction, with buyers coming specifically for the pictures they wanted. The auction showed that there is a market for sensibly priced pictures.

“The emphasis of this auction was good value, affordable pictures, many well framed and ready to go on the wall, by some good names.”

A collection of large, framed and unframed watercolours by Sydney Vale (1916-1991), an artist from the Wapping Group, also attracted keen bidding from collectors, amounting to £2,575. They were the remaining works originally from his studio and featured views including London and East Anglia.