Doctor Who collection and Star Wars toy set for auction

Doctor Who collection and Star Wars toy set for auction 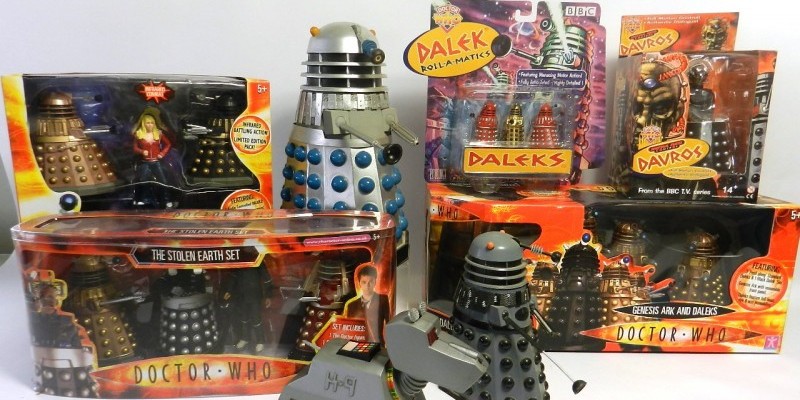 Visitors to our Shrewsbury headquarters have been welcomed by a full-sized Dalek, one of the most feared foes of the Doctor in the popular, long-running BBC television series, for the past couple of months. In fact, it has become so popular that Doctor Who fans have been turning up to have selfies taken with the Dalek, which will be sold in our toys and collectibles auction on June 1.

In addition to the Dalek, the collection include a DVD merchandise stand in the form of the Doctor’s Tardis, a 1960 Give-a-Show project with the first series of Doctor Who when William Hartnell was the Doctor and a large number of Dalek models, including a radio controlled example.

The collection belongs to a collector from Llandudno who is fascinated by the television series and has been collecting for more than 20 years.

“Although some of the items date back to the 1960s, a lot of them are fairly modern,” said Halls’ toys specialists Stewart Orr. “Nevertheless, there seems to be an enthusiastic collectors’ market for Doctor Who memorabilia.

“The full-sized Dalek in reception has attracted a lot of interest already and we expect it to sell for between £500 and £800. The collection is in mint condition and most of the items have never been out of their boxes.”

Mr Orr is also expecting interest in the auction from Star Wars fans as we will be a selling a Palitoys model of Death Star made in 1977. “Because it’s made of cardboard, there is low survival rate for this toy, which was one of the earliest Star Wars toys,” he said “This one is in its original box and we expect it to sell for around £350, although there’s a strong chance it will sell for more.”

Two rare Dinky toys are likely to sell well. One is a rare Pullmore car transporter in dark blue valued at up to £350, while the other is a Dinky Supertoys white Leyland Octopus tanker with plastic wheels, one of just 500 made for Corn Products, which made sweeteners for the food industry and is valued at up to £800.

A Corgi Toys gift set, comprising six Chipperfields Circus models in its original box, is valued at up to £500 and a 1:48-scale model of a Chieftain tank made by Denzil Skinner and presented as a retirement present carries an estimate of up to £120.

The second part of a huge collection of Britains lead farm animals from a Welsh border collector, which extends to more than 1,000 figures, will also be sold following high demand at our February auction.