Diamonds are a girl’s best friend at £200,000 Shropshire auction 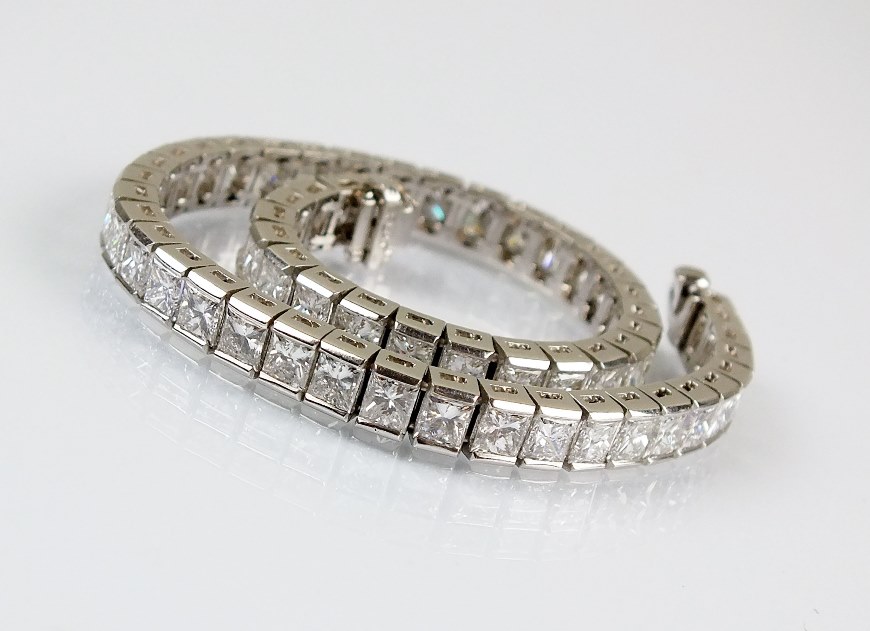 Fine art auctioneers Halls were very upbeat after the buoyant mood in their packed saleroom on Wednesday, which witnessed a series of impressive prices.

Leading the way was a £10,500 diamond set tennis bracelet by Jacob & Co, which was designed as 55 princess cut diamonds set in white metal. The sparkling bracelet was consigned by a Cheshire vendor who also sold an Asprey & Garrard 18 carat white gold three stone aquamarine and diamond dress ring for £3,000.

It was also a good day at the auction for a Shrewsbury area vendor who saw a late 19th century sapphire and diamond oval cluster ring sell for £6,200, a five stone red spinel and diamond ring make £2,600 and a 19th century continental yellow metal and enamel central fob watch sell for £2,000.

A selection of jewellery anonymously donated towards the repair of maintenance of the Church of St Bartholomew at Moreton Corbet Church, near Shawbury sold for nearly £5,200. Pick of the collection was a single strand untested pearl necklace at £1,450 and a 19th century heart shaped diamond set mourning pendant or brooch, which made £1,300.

Stars of the silver section were a pair of 18th century silver tea caddies presented inside a satinwood caddy box, which sold for £2,700, a Victorian four piece silver tea and coffee service at £1,750, a matched pair of George III Adams style silver sauce tureens and covers at £1,700, a South American white metal vase at £1,250 and a Charles I silver seal teaspoon at £1,050.

A silver salver presented by Sir Winston Churchill to his estate manager and friend Percy Cox sold for £550. The engraved salver, which was accompanied by a note signed by Britain’s famous wartime Prime Minister, was presented in 1963 to Mr Cox, retiring manager of Churchill’s Chartwell estate near Westerham, Kent. The note states: “With all good wishes Winston Churchill.”

“The salver was sold by the granddaughter of Mr Cox who lives in Shrewsbury,” said Maryanne Lineker-Mobberley, head Halls’ silver and jewellery department. “We expected it to sell well due to its provenance, the signed note that accompanied it and the fact that this year is the 50th anniversary of Churchill’s death.”

“We were delighted with the excellent prices achieved for the quality lots on offer and we are looking forward with confidence to our next paintings, silver and jewellery auction on June 24,” said Miss Lineker-Mobberley.