An Arts and Crafts shark skin box and cover, which was made for Liberty and Co and attributed to celebrated designer Archibald Knox, doubled its pre-sale estimate to sell for £10,500. 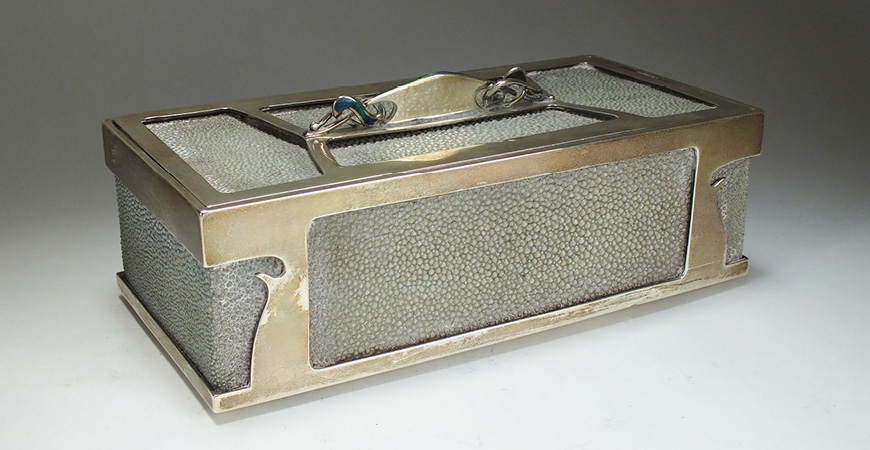 An Arts and Crafts shark skin box and cover, which was made for Liberty and Co and attributed to celebrated designer Archibald Knox, doubled its pre-sale estimate to sell for £10,500. Quality and rarity dominated the headline prices at our successful summer silver, jewellery, coins and pictures auction.

The shark skin box, which had a silver handle, mounts and enamel work typical of Knox, was consigned by fine art director Jeremy Lamond in Hereford and attracted huge interest from bidders.

Maryanne Lineker-Mobberley, head of silver and jewellery section, said the box was probably made to store cigarettes as smoking was very popular at the time.

“Although it wasn’t signed, we attributed the box to the famous designer Archibald Knox and it reflected the height of it’s design,” she added.

“We had six telephone bidders competing for it, which ensured competitive bidding.”

A Manx designer of Scottish descent, Knox (1854-1933) is best known as being Liberty’s primary designer at the height of the company’s success and influence upon UK and international design. His pioneering and prolific work bridged the Arts and Crafts Movement, Celtic Revival, Art Nouveau and Modernism.

Influenced by the countryside and ancient stone crosses in the Isle of Man, Knox minimalised the traditional Celtic knot work to create subtle and simple lines symbolic of the English Art Nouveau Movement.

It proved a very good day for designer items as a Van Cleef & Arpels citrine dress ring sold for £3,200, a Murrle Bennett and Co Art Nouveau 15 carat gold and turquoise necklace from a Pershore vendor made £1,250 and a Bulgari 18 carat gold ‘B Zero’ pendant made £1,000.

Designer watches were also in demand as two lady’s Cartier 18 carat gold wristwatches made £1,500 and £800 and a gentleman’s Longines stainless steel automatic chronograph, which was the auction catalogue’s front cover lot, sold for £1,450

In the silver section, two canteens of cutlery sold well at £2,400 for an example by Goldsmiths & Siversmiths Co, Sheffield with 133 pieces and £2,100 for and an early 20th century German example with 171 pieces.

An etching by British artist Samuel Palmer (1805-’81), titled ‘The Early Ploughman’, sold for £1,950 and was originally exhibited at a New York gallery in the early 20th century.

Palmer, a landscape painter, etcher, printmaker and writer, was a key figure in Romanticism in Britain and produced visionary pastoral paintings. He first exhibited at the Royal Academy when he was only 14 and, in 1822, met John Linnell, who introduced him to William Blake.

Sir Thomas was devoted to his huge collection of 40,000 printed books and 60,000 manuscripts, putting his family deep in debt through his borrowing. His collection was said to be the largest created by an individual in the 19th century.

He established the Middle Hill Press in 1822 not only to record his book holdings but also to publish his findings in English topography and genealogy. During his lifetime, Sir Thomas attempted to turn over his collection to the British Museum but negotiations proved unsuccessful and books and manuscripts were ultimately dispersed over 100 years.

Coins and medals again performed well, with notable prices going to a large collection of UK commemorative coinage at £1,150, a Guernsey 22 carat gold Florence Nightingale £5 coin at £900 and a Victoria jubilee head £2 piece at £760.

“We are very pleased with the auction, which produced strong jewellery and coins results and highlights for the best pictures and silver,” said Mr Lamond.

Miss Lineker-Mobberley said the buoyant jewellery section reflected the increase in gold prices over the past six months and she was pleased that coloured stones, such as sapphires and emeralds, are increasing in popularity.

James Forster, Pictures specialist, said: “Good quality 18th and 19th century pictures with reasonable reserves are still well sought after and achieve good prices, but as soon as you get to 20th century, there is a demand for highly decorative and colourful works.”

Main image – Lot 110: The Arts and Crafts cigarette box attributed to Archibald Knox which sold for £10,500