Art of the East in demand at Halls successful £330,000 Country House Auction 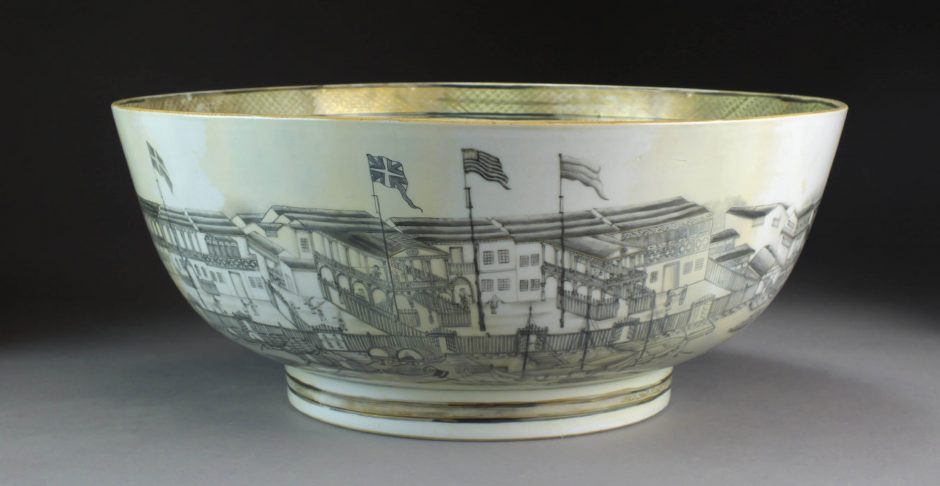 The auction also marked a welcome resurgence of the brown furniture market as Halls achieved a series of excellent results at the purpose-built salerooms in Battlefield.

Pictured above is one of the stars of the day, an 18th century Chinese export ‘Hongs of Canton’ punchbowl which sold for £27,000.

Other headline lots included a pair of 19th century Chinese hardstone and mother-of-pearl inlaid ‘Playing Boys’ cabinet on stands which made £12,000, a Chinese Qianlong cloisonné vase at £3,600, a Qing Dynasty jade, hardstone and mixed metal hand mirror at £3,000, a Qing Dynasty inlaid rosewood table at £2,700 and a large pair of 19th century Chinese famille rose vases at £2,500.

Prices in the buoyant furniture section included £4,200 for a mid-18th century mahogany lowboy, £3,800 for a 19th century Empire style marble topped commode, £1,400 for a Victorian figured walnut and marquetry centre table, £1,200 for a pair of designer open end sofas by Christopher Gollut, £1,050 for a George III mahogany small chest of cockbeaded drawers and £750 for a George III British oak grain ark.

An Italian walnut desk box originally owned by the poet and hymn writer Henry Francis Lyte (1793-1847), best known for his hymn Abide with Me, sold for £340. Born in 1793 near Kelso in Scotland, Lyte was the son of Captain Thomas Lyte and Anna Oliver and was educated at Portora Royal School, Enniskillen and Trinity College, Dublin.

A set of Beatles autographs on a postcard, which the Fab Four signed following a concert in Shrewsbury on April 23, 1963, hit the right note for £2,700.

A collection of six 12 bore Browning and Beretta shotguns from a Shropshire vendor sold for nearly £3,500. The top seller was an F. N. Browning over and under ejector shotgun which made £1,150.

Two of the more unusual lots were a pair of rather macabre early 19th century carved and ivory skeletons seated on coffins, described as repea memento mori, which made £1,250 and a Himalayan wild sheep’s head dated 1907, which sold for £500.

Lot 412: Early 19th century carved and ivory skeletons seated on coffins which made £1,250.

A single owner collection of 18th and 19th century fire marks from South West England and London sold for £1,200. The collection was assembled by the grandfather of the vendor and six of the 22 fire marks were lead examples, which are sought after by collectors.

Jeremy Lamond, Halls’ fine art director, said he was delighted with the “wonderful” overall sale result, which included strong prices throughout all sections, especially in the Asian art. A series of excellent results in the furniture section was particularly pleasing.

For more information about selling and buying at Halls Fine Art, please contact Jeremy Lamond on Tel: 01743 450700 or email fineart@hallsgb.com